I went to the doctor the other day and was really impressed by the physician's medical IQ.

After my checkup, I took my car to the repair shop. The mechanic really had a high level of automotive intelligence.

Then I went to the movies, where the ticket-counter operator understood how to swipe my card and hand out receipts.

If I'm beginning to sound like an idiot, well, that's kind of my point. Who describes a doctor or a mechanic that way? We expect them to have a firm grasp of the concepts associated with their occupations, and take note of their knowledge base only if it appears that they don't know what they're doing. And yet, after a week of the 2009-10 NBA season, I've been hearing this description used in reference to certain players: "He has a high basketball IQ."

Shouldn't every player in the NBA have a high basketball IQ? 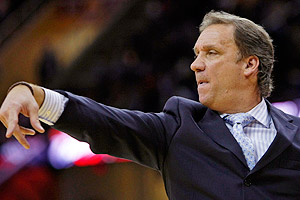 AP Photo/Tony DejakWhat did Flip Saunders expect from a three-time All-Star? That he flunked Basketball 101?

After all, they are among the best of the best in their industry. A player's understanding of the nuances of his profession shouldn't be pointed out as if it's a rare occurrence. Given that he is employed in a high-profile field with few openings, it should be expected, a matter of course. But I still hear analysts and coaches repeatedly make a point about "basketball IQ."

It's touted in Thabo Sefolosha's bio on the Thunder's Web site, as though it were a key stat.

Flip Saunders, the new coach for the Washington Wizards, said one of the things that impresses him about Gilbert Arenas is his "high basketball IQ." Really, Flip? Arenas is a three-time All Star with a six-year, $111 million contract. You don't reach that level of success in the NBA without a "high basketball IQ." What was Saunders expecting?

Or perhaps the better question is this: What are we expecting?

I've been a professional journalist for nearly 15 years now, and to this day, someone in the work environment invariably offers this compliment to me: "You're so well-spoken." I have heard scores of other black professionals -- executives, teachers, even politicians -- talk about hearing the same four words: "You're so well-spoken." It's as if the occupation or education level of the person to whom the phrase is directed is no indication of that person's ability to communicate effectively.

For many, a black person is supposed to speak poorly, and when the reality conflicts with the expectation, people take note. White people tend to say, "You're so well-spoken"; blacks will ask, "Why are you trying to sound white?"

Of course, the opposite is also true. A white person is supposed to speak in a certain way, and when he or she doesn't, some refer to the speaker as "white trash."

I see a parallel with this "high basketball IQ" phrase.

"The current expectation of athletes, especially black ones, is very low with regards to intelligence," says John Lubker, who teaches sports sociology and sports psychology at West Texas A&M. "We expect them not to use their brains, and when they do something that we consider to be intelligent, we're surprised. Even if the intelligent thing they're doing happens while they are playing their sport, which is really insulting."

It's like telling someone who has worked in the communications field for 15 years, "You're so well-spoken."

Because we are so used to hearing dehumanizing characterizations of athletes, particularly those who are black ("He's a beast," "He's a monster"), that we subconsciously dismiss the intellectual aspects of the sport they're playing. Generally, white athletes "strategize," while black athletes go on "instinct," as if the games were being broadcast on Animal Planet. It is true that to be a great athlete, you have to be physically gifted. But to be a professional athlete, you also need an incredible work ethic. And you have to be an expert in your sport, in your profession.

Nobody should be surprised by that.

"The term 'high basketball IQ' suggests two things: that the athlete is only smart about basketball and nothing else, and that there are players in the NBA with a 'low basketball IQ,' which is silly," says Robert Thompson, the founding director of the Bleier Center for Television and Popular Culture at Syracuse. "… Without question, language shapes the way we think about things. What we name stuff, how we describe it, it all reflects how we view it, how we value it."

"When we talked about communism, we used to talk about the 'domino effect' -- if one country falls to communism, then another will and then another until the entire world falls. We took that metaphor literally, and it frightened and motivated a lot of people and got us into Vietnam. We still talk about 'dumb blondes' as if beautiful women with blond hair are naturally dumb. This isn't silly hairsplitting. It's real."

Lera Boroditsky, a psychology professor at Stanford, says her research focuses on how language influences thought. 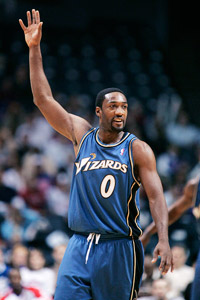 "With animal imagery, you think that one group is less evolved than another," she says. "Less evolved means less feelings and less intelligence."

One of the defenses football coaches and owners long used to explain their resistance to playing a black quarterback was that they did not believe blacks were intelligent enough to read defenses and make quick decisions. You don't need to read very far into "Third and a Mile," William Rhoden's oral history of black quarterbacks (here's an excerpt), to be reminded of that. Coaches thought those players were professional athletes solely because of their physical prowess, not because they were expert in their sports. Even today, you hear descriptions of black quarterbacks in terms of their physical skills, while white quarterbacks are described in terms of their intellect.

As I said earlier, this isn't something only white people do; blacks do it as well.

Admittedly, I'm pretty sure I've fallen into this line of thinking on more than a few occasions myself. Who hasn't bought into the concept of the "dumb athlete"? Who hasn't bought into the idea that the phrase "dumb athlete" is redundant in the first place? But the truth is, that's a reflection of what we expect from these athletes based on our bigoted, preconceived notions more than an appreciation of who these people actually are as professional athletes.

Are there some NBA players who have a better understanding of the game than others? Absolutely.

Are there some players who seem to be more intelligent than others? For sure.

But the important thing to remember is that even the 12th man stuck at the end of an NBA bench has a "high basketball IQ." And if he doesn't, that just means the person who signed him to a contract probably doesn't have a very "high business IQ."

LZ Granderson is a senior writer for ESPN The Magazine and a regular contributor to Page 2. He can be reached at lzgranderson@yahoo.com.