The best players in the sport of ultimate are difficult to recognize in uniform.

That wasn't an issue for the University of Oregon club team. A lack of uniforms was the problem for the Ducks, who had their season cut short last month after apparently romping partially naked during a game in Corvallis, Ore.

I was surprised to learn that UO suspended the team for playing au natural. After all, I've heard a weekend in Eugene is not unlike a trip to Bonnaroo. Surely, UO administrators couldn't be so strict, could they?

As it turns out, the team was already on probation for being involved in incidents involving alcohol and for getting speeding tickets in state vehicles on the way to tournaments. 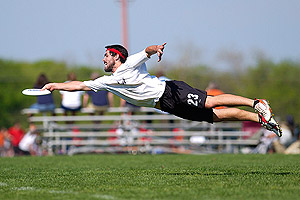 Matt Lane photo The Oregon ultimate team is hardly a bunch of villains, but its members learned the hard way that they're held to a higher standard than average students.

Nevertheless, the Ducks, ranked No. 3 in the nation at the time of their suspension, were sent reeling by the news.

"Me and my teammates came here to play ultimate," said senior team member Kevin Minderhout. "It's a serious sport to us. This was supposed to be our year until it was all taken away. Just like that -- season over."

The last straw for UO administrators was the incident at Oregon State. The Ducks' A and B teams were scheduled to play each other at the end of a drizzly afternoon, but opted to play a quick "naked point" in lieu of a whole game. Five players took off their shirts. Five others removed their shorts and underwear. A passerby filed a complaint to the safety department, and a letter detailing the incident ultimately landed in the student affairs office in Eugene. Before long, the committee which oversees Oregon club sports decided to pull the plug on the team's season, and the Ultimate Players Association, the sport's governing body, agreed with the decision.

Oregon's director of club sports, Sandy Vaughn, said the details of the Corvallis incident actually aren't as incriminating as the team's record of repeated slipups. "This was the last straw," Vaughn said. "They were already on probation."

Vaughn, who has worked with UO club sports for 35 years, actually was in favor of giving the team another chance, but the committee with jurisdiction over the decision voted 3-0 to end the team's season, according to the Daily Emerald, the UO student newspaper.

Uhh, excuse me, is this the Delta house?

Minderhout acknowledged the similarities between his team's plight and the one detailed in "Animal House" -- the college cult favorite filmed in Eugene. The team recently watched the movie together, making light of similarities. "The whole 'double secret probation' thing is too funny," Minderhout said. "That's us!"

While the parallel is good for a laugh, Minderhout insisted the Oregon ultimate team is nowhere near the level of delinquency of the Deltas. "We are about the nicest, most welcoming club ever, but it's like they think we're a bunch of bad guys."

Vaughn disagreed. "They're not bad guys. They are fun-loving guys who have made one misjudgment too many. The university had to draw the line somewhere."

Possible overexposure aside, the UPA and the sport of ultimate make for some serious competition -- upwards of 11,000 student-athletes on more than 650 college teams across the country entered into this year's College Championship Series, the string of tournaments leading up to nationals. The UPA keeps extensive records and rankings, and the 20 teams which survived a series of sectional and regional tournaments advanced to Columbus, Ohio, for the national championship.

Noticeably absent from nationals over Memorial Day weekend was No. 3 Oregon. Big-time college athletes get away with far more significant transgressions all the time.

"We can't set our standards based on a general lack of standards. Nobody doubts the talent of the team. In fact, we only wish that they had been wearing the green and yellow that day," Vaughn notes with compassion that's both attentive and light-hearted.

Of course, there's no point in comparing big-money varsity athletics to a club sport.

Nevertheless, if you're wondering why anyone would come down so hard on a bunch of fun-loving kids, remember that the university forgave a few missteps before throwing the book at them.

"We're trying to build character and develop leadership and life skills with our club sports programs," said Vaughn. "We foster the team concept. So, if a few guys misbehave, we're not going to single them out from the rest of their team. What message does that send? Certainly not a team concept."

Still, if most of us are honest about our college experience, we would be hypocrites to condemn the Ducks. Look at the bright side. At least they didn't drop a truckload of fizzies into the swim meet or deliver the medical school cadavers to the alumni dinner.