Mixed martial arts star Gina Carano will step into the cage Saturday night for the fight of her life, facing Cristiane "Cyborg" Santos for the inaugural Strikeforce women's championship. We caught up with this woman who is as widely adored as she is feared -- which makes sense, considering the fighter was still flashing her infectious smile in the nervous days leading up to the landmark brawl, the first ever headlined by women. Here's what she told us.

Page 2: What if you woke up tomorrow and couldn't fight anymore? 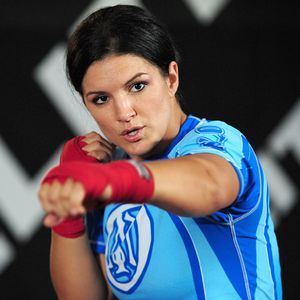 Robert Laberge/Getty ImagesGina Carano's getting ready to headline a MMA even for the first time.

Gina Carano: I'd look into drumming. I'd get a drum of some kind, or a whole set. It's always been a weird passion of mine, but I've been all over the board with passions, so who knows if I'd actually be able to do it?

What's the last thing that made you cry?

My emotions break from the intensity leading up to the fight. I wish I had a better answer than that. I wish somebody would make me cry in life, but this happens to be life right now.

What's the last workout that made you vomit?

I haven't puked in a long time from a workout -- I was definitely very close this last training trip. It was intense, I almost lost it. I don't think I've gotten sick since basketball. No, no -- that's not true! I did Bikram yoga one time. Oh my god, have you ever done that? I had two glasses of wine the night before and I had to run out of the middle of class the next day. That's no joke, that Bikram yoga. Needless to say, I haven't been back.

Ha. Probably guys meeting me and immediately sizing me up and wondering if they could take me. I mean, you don't want everyone you meet wondering if you could beat them up.

I've heard you say that cage fighting is a lot like sex. Explain that one.

Yeah, it's true! I have said that before, and I'm not sure anybody knew that I was serious. What I mean is, fighting is so real, and it's such a natural thing between two people. You're feeding off of each other's intensity; you go back and forth, and there's a strong chemistry of it all. That whole setup is very similar to sex. You have to react to each other. Sometimes the momentum flows well, and other times, one person overpowers it and it's not so nice. See, it's the same thing!

What store would you max out your credit card in?

Ooh, that's a good one. I like those stores like Sharper Image. Wait, are they still in business?

What really spins your wheels?

Music. Always music. I love finding new music. The only reason why I go on MySpace is to check out bands. I've realized that I like to listen to music with a lot of screaming in it lately -- maybe that's just because I'm focused on the fight. But generally I like really intense music of all kinds; stuff that fills the heart.

What are you afraid of? 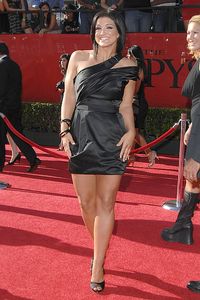 Jon Kopaloff/Getty ImagesCarano at the ESPYS -- this fighter cleans up pretty good!

I don't like spiders -- big or small -- but I can't kill them. I have a tiny fear of heights, and I don't watch those gory movies that are just bloody no-win situations.

You know that old adage about being alone in a dark alley with someone? Is that fear totally lost on you?

Ha, no. I have been alone in a dark alley before and it definitely raises the intensity. I'm still scared of that, because, I mean, you never know what some crazy crackhead is going to pull out these days! There's stuff I can't compete with!

What does fighting do to your life?

Fighting has put my whole life on hold. I used to really love horses. I love being told stories. I love going to theatrical plays. It's almost like this whole thing has stunted my growth. I'm still 21 in my head, I swear. When the fighting stops, I'd love to travel to Thailand, maybe build a school or something. Give back to that culture, and somehow do something for someone else. I want the experience of giving. This career is so incredibly focused on me -- the fights, the constant training. I look forward to taking the focus off of me and my body, and actually doing something for someone else.

What will happen when you open your eyes on Saturday, Aug. 15?

I'll wake up whenever I wake up -- no alarm clock. Then I tell myself to calm down because life is good. I take a shower. Get my hair braided. Then I just focus and listen to music, conserve my energy knowing that the hard work and training is done, I just have to put it in play. Eventually I get pumped and go out and do what I know I can.

It seems like we've been waiting for you to step in there forever.

Yeah, I can't wait to wake up on Saturday knowing that the day has finally arrived. It's been like a -- I don't know, I've never been pregnant before -- but I imagine that when a woman has been pregnant for nine months, she is ready to pop out the baby instead of just carrying it around. That's how I feel about this fight. I just need to have this damn baby!

If you win on Saturday, how will you celebrate?

In some small restaurant somewhere, with my coaches and friends and family. I'll just relax and breathe and be with them, and smile that the whirlwind is finally over.

Would you say Saturday will be the biggest day of your life?

Umm … you know, I don't know if I would call it that. I put a lot of life values before fighting. No doubt this will be one hell of an intense day, but I put God and family first, so there are a lot of big days in my life. … This will definitely be up there.