Caster Semenya is being treated unfairly

In South Africa, an 18-year-old who was recently victorious at the world track and field championships in Berlin has come under heavy scrutiny. The International Amateur Athletic Federation asked that nation's athletic federation to conduct a gender test on the young star, Caster Semenya, whose blistering time of 1:55.45 in the 800 meters bested the field by a remarkable 2.45 seconds.

The story sent the Interweb buzzing with intrigue. A forced gender test? You mean, we can't tell if a person -- a teenager -- is a man or a woman? The idea was so mind-bending that the initial Associated Press report ranked among the most sent stories last week on ESPN.com. 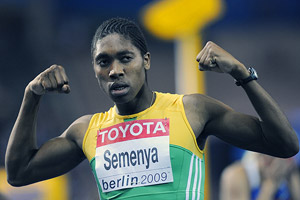 Oliver Morin/AFP/Getty ImagesCaster Semenya's gender is being questioned by defeated opponents in the wake of her victory in
the 800 meters at the world track championships.

It should first be noted that in this age where performance enhancers, cheats and tricks have spared no sport, it isn't unusual for athletes to be asked to prove their competitive integrity. Unfortunately, accusations of cheating or doping after exhibiting a commanding performance are expected. We're suspicious of athletes, and they now must compete beneath ever-present shadows of doubt. When competing for high stakes, they inherently forfeit personal privacy for the purposes of competition and classification.

That isn't want bothers me about the Semenya situation.

In reality, what makes this story so sexy to so many is exactly that. We are determined -- come hell or high water -- to define human beings with binary gender sexing.

I shudder to think of a global stakeout demanding Caster Semenya prove she is a woman by somehow disproving her apparent masculinity or sufficiently compensating for her lack of femininity -- whatever that is.

How is it that steroid testing, something that clean athletes should be willing to shout about from the rooftops, is done discreetly but an 18-year-old's gender test is the subject of malicious global gossip?

The root of what's wrong with this picture is the barrage of opinions that Caster Semenya "just doesn't look womanly enough" and that her six-pack and speed must be the result of a hidden Y chromosome.

So, maybe she's cheating. Maybe she's not. But like so many other female athletes, her athletic prowess and physical appearance have triggered a barrage of personal questions that male athletes don't have to deal with.

Shaquille O'Neal is a veritable giant, genetically unlike almost any man we know, but we don't ask if he's human. Instead, we call him an athletic freak. A superman. Michael Phelps' torso-to-leg proportions, combined with his large paddle-like hands, make him a marine machine. Yet we call it a gift, not a laughable genetic blunder. Jockeys with 27-inch waists and small shoulders might lack the physical stature we've come to expect of men. Still, we don't call them womanly. We deem them built to race horses. 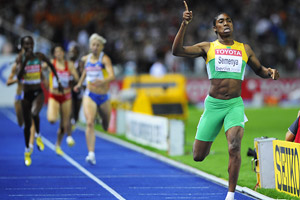 Oliver Morin/AFP/Getty ImagesSemenya scorched the field in Berlin in 1:55.45 -- 2.45 seconds ahead of her closest competitor.

There's an undeniable double standard at work in sports. As long as women have competed (and as long as evolving attire has allowed us to see their bodies), people have depreciated and humiliated some of the best female athletes by calling them manly. Their enigmatic strength and athleticism is countered with derisive criticism and gender judgments. Society wants women to be toned, not muscular. That's weird. It hopes women are athletic, but not too competitive. That's not cute.

High-profile athletes are often eyeballed from every angle, but in the case of Semenya, no one really cares who she is or how she managed to make it out of her South African village to the world stage. What everyone needs to know are the intricacies of her most personal parts.

Why does her body look like that? Is she a he?

News seekers cut right to the chase, posing a question that they believe to have one definitive answer. After all, we are defined within seconds of our birth. Our lives immediately shoulder a definition. It's a boy, or it's a girl. Every single thing we do with our lives will hinge on that impossibly simple description.

We generally assume that sex can be defined as one of two options through telltale biological, chromosomal, anatomical or hormonal indicators. In fact, there about 75 known variations within an individual's sexing, according to the Intersex Initiative advocacy group. These variations include conditions where people pronounced female at birth may have a Y chromosome, and people who have been considered boys since birth may not. In the book "Between XX and XY: Intersexuality and the Myth of the Two Sexes," author Gerald Callahan, an associate professor in Colorado State University's department of microbiology, immunology and pathology, reports that every year more than 65,000 children are born who aren't obviously either boys or girls. Callahan writes: "In truth, humans come in an amazing number of forms, because human development, including human sexual development, is not an either/or proposition. Instead, between 'either' and 'or' there is an entire spectrum of possibilities."

Just as sex is complex, so too is gender -- the expression of sex. People defy stifling gender stereotypes everyday. It's the reason why Justin Timberlake is more graceful than your girlfriend, and Gina Carano could out-bench your brother-in-law. But even as we trump stereotypes, those who are different are still widely regarded as disordered.

That is where sports consumers need improvement.

There are so many things to consider in these sensitive situations. The first is that we're not asking someone to prove that his or her urine and blood are clean. We're asking someone -- today, a South African teenager -- to justify what we've been conditioned to consider male or masculine. We're asking her for an alibi for her inexplicable athleticism.

This unshakable interrogation at best taints her remarkable achievements, and far worse, it belittles her human existence.

There is a reason why it will take a gynecologist, endocrinologist, internist, psychologist and a gender expert to place a human being, complete with race, ethnicity, sex and socioeconomic traits, into one of two boxes. Semenya isn't the first and surely won't be the last athlete to cause such confusion, proving that gender surely isn't as simple as we once thought. We are tasked to stop stigmatizing the individuals who are teaching us this lesson.

The story of Caster Semenya is still being written. Gender tests are described as elaborate and complicated -- much like the answers being mined. As we process her fate, I hope minds are opened to the reality of gender's variance and that new understanding gives way to an appreciation for the anomaly of athletic achievements and abilities which often transcend the sex of the body performing them.