Tampa Bay's Joe Maddon was the American League Manager of the Year in 2008, which is just one of the many things separating him from his peers. He also has a chess set on his desk, a wine rack in his office, and a Dr. Seuss quote hanging on the wall. He spoke with Page 2 recently about his love of reading, traveling, wine, cycling, the Rolling Stones and Bruce Springsteen … 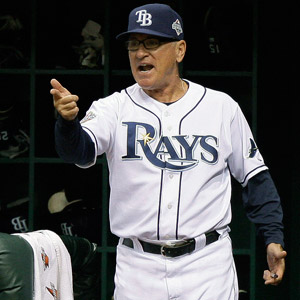 AP Photo/David J. PhillipJoe Maddon, surely one of the most unique skippers in the majors today.

1. You're well-known for posting quotes in the clubhouse from sources as diverse as Dr. Seuss and Albert Camus. What's your favorite quote?

The one I've been using a lot lately because it pertains to what happened last year and where we are now is -- and I'm not sure if I have the wording exactly right, but it's: "A mind once stretched has difficulty going back to its original form." That's attributed to Einstein. I love that.

2. Who's your favorite author?

Pat Conroy. I like Ken Follett a lot, and I'm really enjoying his newest book that I'm reading now, but I like Pat Conroy's stuff a lot. "Beach Music" is probably my favorite among all his books, but "Prince of Tides," "Lords of Discipline" -- I've read them all. "My Losing Season," I really enjoyed that. Believe me, I'm no expert when it comes to putting a sentence together, but I love his prose and it's so interesting. To me, his description of taking out the garbage would be worth reading.

"Beach Music" or "The Pillars of the Earth" by Ken Follett. One of those two.

3. You're holding a dinner and you can invite any three people, alive or from history. Who are they?

Branch Rickey. My dad. And let me think. [Long pause] Mark Twain. He's one of my favorite authors and I don't know enough about him -- you just read all the little passages and hear that he was quite the colorful fellow and a very interesting fellow at that particular juncture. I'm not well-versed on him, but I would just like to sit down and have some beers with him.

You talk about quotes. Almost every famous quote by an American is either from Benjamin Franklin or Mark Twain.

Exactly. He was incredibly brilliant.

The ability to fly. So I could go anywhere I want. I love to travel and it would be easier to get to Europe or the Far East that way. And to be able to do it on my own would be very attractive.

Your arms would get pretty tired.

That's all right. And I would feel relatively safe because I could trust in my own mechanisms.

5. You're an avid cyclist. What is the scariest, near-disaster moment you've had on your bike?

I was riding to Anaheim Stadium one day, and I was going over this little bridge, and I didn't notice this little ledge and I hit it sideways with my tire and it just sent me flying 15 feet in the air. But I had my helmet and everything on, so I was OK. Another time I almost got clipped by Ravens Stadium in Baltimore because I didn't know the roads there and this guy came hauling up behind me. But luckily he did miss me. The only time that I fell that was pretty nasty was that time near Anaheim Stadium. I was just bruised pretty good, but you're riding along about 15 miles an hour and all of a sudden you don't see something and it throws you up in the air -- that's kind of a weird feeling. I was airborne for a little bit.

What could this country do to get more people biking?

Better bike paths. Create more bike-friendly trails within its cities. I'm talking [about] lanes that are well-lined -- and let people know, not just bikers, that cars [need to] stay out of this lane. Advertise a little bit, educate the masses. I would like to see more cities with legitimate trails lined off for bikers. 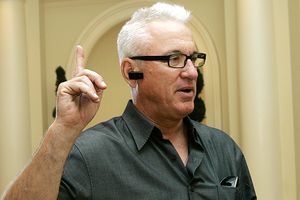 AP Photo/Lenny IgnelziMaddon has a very diverse set of interests, that's for sure.

My wife, Jaye. My wife -- I'm not going to say she's a wino, but she likes wine and she got me into it a couple years ago. And it's like anything. If it's something new to me and I'm interested in it, I'll start researching it. So I researched it by drinking more wine and finding the things that I like. I was into the California reds, and now I'm at the point where I'm into the Spanish reds. So I think over the course of the next couple years I'll become more versed in the French and Italian wines. The Spanish wines I like right now are Clio and Emilio Moro. They're really nice.

7. What is the best concert you've been to?

Whew. The one that really stands out to me -- and I don't now why, because I've seen them a couple times -- but the Stones at Anaheim Stadium in, I think, 2005. I was just so impressed by the energy of these 60-year-old guys. It was inspirational -- besides their music, which I love. To see Mick and the boys up there carrying on like they're in their 30s again was pretty cool.

Have you ever met Springsteen?

No. I would love to meet him.

Yeah, but he's a Yankees fan. The concerts of his I've seen go back to Lafayette College, when he played there in the '70s for three or four bucks to get into Alumni Auditorium. Those were fabulous, too, but the most recent one that really made an impact? The last time I saw Springsteen was at halftime at the Super Bowl. And Billy Joel and Elton John up in St. Pete, which was pretty cool. But the Stones? Man. There's a difference between the music of the '60s and the early to mid-'70s. I love the music of the '70s. But the middle to the late '60s, that where the thoughts were formed for people of my age. It's very base. It's not intellectual by any means. It's all about feelings, so that's why I really like the late '60s Stones stuff, because I was like 10 to 15 or 16 years of age, so that time is much more of my essence. Springsteen is much more of a college, intellectual part of my roots. When I hear the Stones, it really takes me back to '63 or '64, when "Satisfaction" came out.

8. What's a recurring anxiety dream that you have?

It used to be when I was playing, and the pitcher was pitching from about 5 feet away and you couldn't get the bat there in time. That's been my primary one. There's the proverbial one where you're being chased, but the most vivid one that occurred the most often was the pitcher being 5 to 10 feet in front of you and you had no chance.

Have you had it lately?

I really don't have any recurring dreams anymore. I sleep pretty good.

9. You got married during the winter. Where did you take your wife on your first date?

Wow. That's a tough one.

Are we getting too personal?

No, I really don't remember.

Must have been a very memorable night.

Well, there are some things I can't tell you. But the first real date night? I can't remember.

OK, how about an easier one -- where did you take her on your honeymoon?

We went to Europe. We went to Rome, Florence, Prague and London. My favorite part of the trip was being a tour guide. I had been to those places before, and Jaye had not been there. That's why I chose those cities -- so I could show her around a bit. So I was enjoying the fact that she was enjoying it so much. 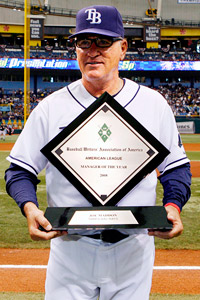 Was there one place you looked especially forward to seeing her reaction?

Yeah, the Sistine Chapel. And she didn't let me down. And the statue of David. Those may be the two most religious moments you can have as a human being. To think that a human being did those two things. And I know that Michelangelo didn't do the Sistine Chapel by himself. But nevertheless, when you look at that -- it's just overpowering. It's unimaginable. That that could be done at that time in history, with the tools available, with that kind of detail? It's magnificent. And the David … wow. You have that little stool where you sit there and just look at it, and it looks like it was done yesterday. It's so clean and vibrant and detailed and, again, overpowering. This guy lived to be 89 years of age, and I don't think we truly understand all that he achieved in his lifetime. Just to live to be 89 at that time in history was an accomplishment.

10. How did you learn you were named Manager of the Year?

We were in Rome, not far from the Spanish Steps, and I was receiving this phone call for winning the Manager of the Year award. That was a significant moment. My new wife was there with me, and I had a nice bottle of wine going on. I don't remember which one it was, but it was a good wine.

You're near the Spanish Steps, with your bride and some wine and being awarded Manager of the Year. It doesn't get much better than that.

I got the call about half an hour after we got there. It was like 9 o'clock Rome time. It was pretty historic.