Stephen Strasburg throws a fastball that reaches 100 miles per hour, went 13-1 with a 1.32 ERA at San Diego State this season, struck out nearly two batters per inning, and threw a no-hitter. He also struck out 23 batters in one game last year and pitched in the Olympics. He was the first pick in the draft Tuesday and may seek a $50 million contract.

The most dominating pitcher in college this year was the University of Washington's Danielle Lawrie, the Most Outstanding Player in the Women's College World Series and the NCAA's Player of the Year.

Lawrie went 38-7 with a 0.84 ERA and 477 strikeouts in 315 innings. While Strasburg generally pitched only once a week (wimp!), Lawrie pitched 12 consecutive complete games in the last three weeks of the season, starting and finishing every game for the Huskies during the regionals, super regionals and College World Series. She threw 395 pitches and two complete games in one day, including a 15-inning game in which she struck out 24 batters. 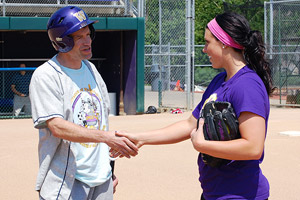 Oh, and she also hit six home runs this season. Did you do that, Mister No. 1 Pick in the Draft?

"We were watching all the games in the trainers room and we marveled at all the pitches she threw -- what was it, 250 in one game and 395 in one day?" said Seattle Mariners team trainer Rick Griffin. "We watched that and talked about what a feat that was. She's phenomenal."

Tell me about it. I batted against Lawrie this week with some other media representatives (aka, the Hitless Wonders) and she essentially pulled my pants down in public, and when I tried pulling them back up, she gave me an atomic wedgie. She was merciless, which was to be expected from such a competitor. If I wanted to see what it was like to bat against the best pitcher in college softball, then damn it, she was going to show me. Lawrie threw me pitch after pitch and embarrassed me with each one. I looked so bad that Chico's Bail Bonds should have offered me an endorsement deal afterward. I swung and missed about 10 times, though I was occasionally so overwhelmed you can barely describe what I did as swinging. Title my performance "The Mighty Wind."

On the last pitch, however, my bat somehow crossed the same plane as the ball at the same moment and I hit a grounder to second. Frankly, I was as surprised as Lawrie was that I made contact, and I'm still not sure how because I sure as hell didn't see the pitch.

"Yeah, the pitch was inside and it wasn't as fast as I normally throw it because I thought I could just gas you," she said. "But clearly, you're better than I thought you were."

That's because, like Lawrie, I won a softball championship at the University of Washington. 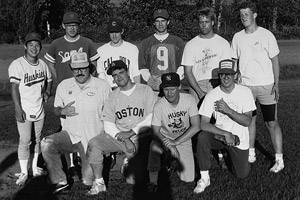 Lawrie's tone indicated she was anything but impressed. And that tone did not change when I showed her the team photo taken immediately after our Widowmakers team won the 1989 UW intramural championship. "Nice mustaches," she said, noticing that one of our players was wearing jeans and a Chevron gas station shirt.

Nor did her respect increase significantly when I pointed out that to win the championship, we had to beat the medical school team and the marching band team.

Then again, Lawrie and the Huskies didn't have an easy road to the championship, either. They spent the entire tournament, from regionals to championship game, on the road, traveling 6,899 miles and sleeping 22 nights in three hotels (two players to a room). One game lasted so long into the night that by the time they returned to their hotel from the postgame meal, it was 4 a.m. There were seven very massive laundry days.

On the other hand, they didn't have to beat the law school team.

Why no tournament home games? There are no lights at the Huskies' home field, so TV tourney games at night were impossible to accommodate (donors have since given money to fund the lights).

Lawrie was the anchor throughout the WCWS, winning 10 games and throwing 1,501 pitches in a 17-day span. That's nearly 90 pitches every day. Can Mister "Scott Boras Thinks I'm Worth $50 Million" do that? 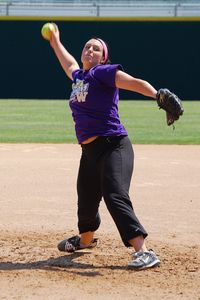 Kevin Jackson/ESPN.comThis is as close as most people get to seeing the ball when Danielle is on the mound.

Whenever I see softball pitchers throwing smoke day after day, year after year -- Eddie Feigner was clocked at more than 100 mph and was still fanning batters in his 70s -- I always wonder why some major leaguers don't throw underhanded. Mariners pitching coach Rick Adair says he never really thought about it but imagines baseball's 10-inch-high mound (there is no mound in softball) and the additional 17 feet from home plate probably have something to do with it. A fellow Widowmaker who pitched on a JC baseball team as well as in a fast-pitch league says the smaller size of the baseball makes it difficult if not impossible to throw underhanded with sufficient velocity and movement. Pitching from the stretch might also be a problem.

Some major league pitchers have thrown from pretty low, though -- Dan Quisenberry, Kent Tekulve and on occasion, Dennis Eckersley -- and Mariners ace Felix Hernandez was intrigued enough by Lawrie when she threw out the first pitch (underhanded, of course) at a game last week that he jokingly asked her for tips. "Felix asked me how to throw a rise ball. I said, 'You can just stick to what you're doing. No need to try the underhanded thing.'"

Griffin, the Mariners trainer, says throwing overhand is an "unnatural motion" and creates impingement in the shoulder. There is far less strain throwing underhand.

"There's a big difference between throwing overhand and underhand and that's been known for a long time," he said. "A softball pitcher can bounce back a lot quicker. I was telling her the other night that I wanted her to come and talk to our pitchers so they can learn to throw so many pitches. She said they should run more."

Still, a one- or two-man rotation would solve a lot of problems for a team. "I think some general managers and team presidents would be real happy from a payroll standpoint," Adair said.

Lawrie can hit 70 with her fastball, which from 43 feet is equivalent to a major league fastball from 60-feet, six inches. She says that if she had to pitch from 60 feet though, she wouldn't strike out anyone. 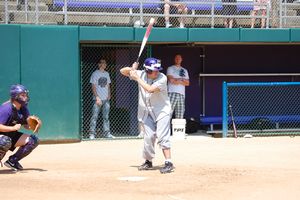 Kevin Jackson/ESPN.comIt wasn't a matter of "if" Jim Caple would go down swinging, it was "when".

"You're the only one who hit it to second base. That's a big deal," Lawrie told me. "You did, like, see a ton more pitches than everyone else, but that was impressive."

And bear in mind, it has been 20 years since our IMA championship and my batting stroke has suffered in the past couple decades. In fact, I reluctantly gave up the sport a couple years ago when I started swinging and missing, and I mean swinging and missing in slow-pitch. But maybe all I need to do is get in the cage and practice some to get my groove back.

Or at least look more respectable when I strike out.

"I still don't think you could hit me but I think you could get your swing coming along a little better," she said. "You can tell sometimes when people take a good hack. You go, 'Ooohh, that was a nice swing.' I didn't feel that way with you today."

You don't see this too often. Toronto's Alex Rios went 0-for-5 Thursday while the next Blue Jay in the order, Adam Lind, went 5-for-5. And you don't see this very often, either -- Joe Nathan earned a save Tuesday even though the Twins entered the ninth inning with a 10-0 lead. And you won't see Florida reliever Hayden Penn for awhile -- he walked in three batters for a line so bad (1/3 IP, 0 H, 4 R, 1 ER, 4 BB, 0 K) that the Marlins designated him for assignment immediately after the game.

This week's award, however, goes to Dontrelle Willis for his amazing game last Thursday. When Willis held the Rangers to one hit and two walks in 6 2/3 innings last month for his first win in two seasons, there was hope that he was finally overcoming his awful control problems. But he's walked 11 in his past 13 innings while losing three consecutive starts and the worst was last Thursday. On the one hand, he held the Red Sox hitless. On the other hand, he still allowed five runs on five walks and a hit batter in less than three innings. He threw 53 pitches, more than half outside the strike zone. His line:

Willis has walked 76 batters in his past 83 innings, dating back to August 2007.

• Why doesn't baseball allow teams to trade draft picks as the NFL does? Well, says Mariners general manager Jack Zduriencik, one reason is that baseball teams don't have the assurance a draft pick will actually sign with them, the way NFL teams do. "The difference between the NFL draft and us," he says, "is we are drafting a 17- or 18-year-old or a 21-, 22-, or 23-year-old. We can draft a high school player from Washington, a JC player or a college junior with eligibility left. Everyone of those players has the option to sign or play in college instead. In the NFL, the player has to give up his eligibility. That player says, "I'm playing," and he's taken where he's taken and he knows what he'll make based on where he's taken and he has nowhere else to go." All that is true, but it only makes a draft pick less valuable in baseball, not untradable. Teams would be taking a risk to trade for a draft pick not knowing whether he'll sign but teams take risks every time they make a trade. Plus, a team trading for a pick probably does so with a good idea it has enough money to offer him, as opposed to the team trading the pick. Zduriencik is right when he says the draft should facilitate "the best player going to the worst team." But failing that guarantee, it makes more sense to change the rules so that teams can decide to whether the player or for a trade helps them more.

• So Manny Ramirez is fifth among National League outfielders in the All-Star voting. Big deal. Fans occasionally vote undeserving candidates onto the team. Rather than worry how it will look if baseball has a proven juicer in the All-Star Game, perhaps the lesson here is that fans really don't care that much about steroids in baseball, or at least not nearly as much as the constantly outraged media.

• Speaking of steroids, it was interesting that the Associated Press story about the Patriots' Rodney Harrison retiring as a player to join the NBC football broadcast team didn't mention his suspension for steroid use until the 15th paragraph. Not that there is a double standard or anything but I think that would have been mentioned much, much earlier in a similar story about a baseball player linked to steroids. Like, probably in the lead graph.

• Our main man, R.A. Dickey, is having a good season in middle relief for the Twins (a 2.86 ERA at last glance). On Sunday, he mixed 74 mph knuckleballs with 89 mph fastballs on the black. That's just not fair. The Twins like Dickey in his current role, which allows him to regularly step in and keep the game close with needed quality innings.