The new stadium for the Cowboys not only cost more than $1 billion, but it's also the first football facility that requires ground rules.

That's because the stadium's video board hangs so low over the field that if Ed "Too Tall" Jones still played defensive end for the Cowboys, he would have to duck on his way to the quarterback. During the first exhibition game last week, Tennessee Titans punter A.J. Trapasso hit the video display board with a kick, prompting coach Jeff Fisher to challenge the play for review. Cowboys owner Jerry Jones responded to complaints about the problem in typical fashion: Tough. Deal with it.

Jones is right, though. Football fields are too regimented. They're boring. They need to be distinctive like baseball parks, filled with nooks, crannies and assorted features that give a stadium its character. And the new Cowboys Stadium is. All the attention has gone to the punt hitting the replay board, but there are other quirks: 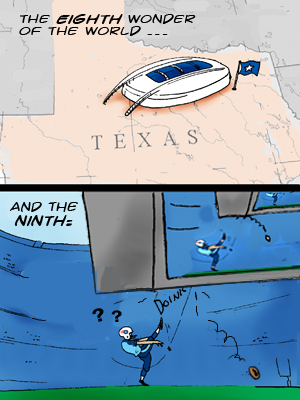 • Remember the sexy, drug-filled glory days of 1990s Cowboys? Now you can re-live them! Just like Monument Park in Yankee Stadium, fans can tour a replica of the team's infamous "White House," conveniently located behind the south end zone. Soak in the hot tub, smoke some of Nate Newton's 175-pound bale of marijuana, take a hooker to a room for a private lap dance -- do whatever you want, because the White House is both a museum and the greatest luxury suite in all of sports. Note: You must show either $5,000 in $100 bills or a police warrant for admission.

• Jerry Jones hates sharing merchandise revenue equally with other NFL owners when the Cowboys sell a larger chunk than everyone else. To compensate, he stole a page from the University of Phoenix Stadium playbook. But instead of a field that rolls in and out, his field also tilts up and down. That way, opponents are always running uphill and the Cowboys are always running downhill, thereby giving Jones back the uneven playing field he so desires.

• Like the video board; speakers; and other large, artificial objects, the breasts of Tony Romo's current celebrity girlfriend are in play. If the ball rebounds off the breasts and lands out of bounds, the play is dead at the spot where it crossed the sideline. If it lands in bounds, the ball may be advanced at the receiving team's own risk. If the ball gets caught in her cleavage, the play is ruled dead and the kicker wins a new truck.

• Fenway has the Pesky Pole, but the Cowboys have Folk's Uprights, which bend out like a wishbone to give Dallas kickers a wider target on field goal and PAT attempts.

• Baltimore Orioles fans can eat at Boog's Barbecue Pit. San Francisco Giants fans can savor Orlando Cepeda's Caribbean BBQ stand. And now Cowboys fans can help themselves at Leon Lett's Hot Potato Stand -- if they can hold onto them, that is.

• Because the rules only specify a penalty for having too many "men" on the field, the Dallas Cowboys cheerleaders are allowed to dance on the field during play. They are not allowed to block or tackle, but they may "distract" opposing players.

• San Francisco has McCovey Cove. The Cowboys have the 6-foot-deep, 45-foot-diameter Wade Pool at the 20-yard line, where fans can cool off during those hot Sundays in September. Just be careful on crossing patterns -- the pool is in bounds and in play.

• While the University of Georgia football program buries its old mascots beyond the end zone at Sanford Stadium, devout Cowboys fans can now buy cemetery plots in the end zone and be buried right along with the team's playoff hopes.