One man's quest to dunk a basketball

When Jason King sensed the initial disturbing approach of mortality, he could have responded in the time-honored male manner by buying a $75,000 Corvette. Instead, he chose a less expensive counterattack but a far grander one, one that would prove we all can achieve our athletic dreams no matter how vigorously the birth date on our driver's license states otherwise.

King decided he would dunk a basketball before his 30th birthday, on Nov. 22.

"The idea of turning 30 was just a number and it didn't bother me at all -- I knew it was coming, but when it got to be about six months away, it started carrying a lot more significance than I imagined it would," King said. "Not that it was freaking me out, but it is a significant landmark, and I started to feel like my youth is slowly getting further and further behind me, and I wanted to figure out a way to counteract that, at least mentally, to prove I still have the same athletic prowess and capabilities as I did in my late teens."

Thus began IfThisGuyCanDunk, an ongoing weekly video blog of King's attempt to dunk a basketball for the first time in his life. Or as the site describes it: "An aging man's quest to claim his youth, before it's too late."

We can all identify with King. Lots of us set athletic goals to prove our ability or defy the aging process. We run marathons, climb mountains, bicycle across a continent, buy an entire closet of Tommy Bahama Hawaiian shirts … anything to prove we still have what it takes. But dunking a basketball is different. With enough training and perseverance, most everyone can complete an endurance event. Not so with dunking a basketball, no matter how much Viagra you swallow.

"Dunking a basketball is the ultimate moment by the ultimate athletes," said Fox Sports Net analyst and former NBA assistant coach Mike McCollow. "It's grace and power and finality and all those things that play into it. In a lot of sports, if you're 5-foot-9 and 170 pounds, you can hit a 5-iron as far as anyone or hit a hole-in-one or hit a fastball into the seats, but dunking a basketball is something so many people simply can't do."

Or, as King put it, "It's kind of a symbol of manhood or something."

McCollow is "5-foot-9 … barely," and when he was a young man he tried everything he could to increase his vertical leap enough to dunk. And that means everything. While working as a caddy, he would carry two bags and then walk the entire 18 holes on his tiptoes. Yes, on his toes. "I'd tell the golfer, 'I'm not crazy. I'm just building my calf muscles.' … Or my neighbors would look out their window and I would be hopping around in the backyard with a 2-by-4 on my shoulders like in 'Rocky.'"

None of it worked. McCollow figures he needs another two inches to dunk, and another six inches to dunk in all variety of manners. But perhaps it's still not too late. King said he's heard of trainers who work specifically with 30- and 40-year-old men to help them dunk a basketball.

LaRue Cook trains many people for many reasons at LEC Fitness in Alexandria, Va., and one popular reason is so they can dunk a basketball. "They may not say 'I want to be able to dunk,' but they'll say 'I want to increase my jumping,' and dunking a basketball is their ultimate goal," Cook said. "It's an identifiable, objective goal that people can say, 'That's what I want to achieve.' And it's very easy to see if you've achieved it."

Especially if you blog about it every week.

King is a wiry 6-foot-1 with a receding hairline who works as a server at a Seattle restaurant. His basketball career was pretty much limited to a bench role at a small high school in St. Louis. "It was a very small school," he said. "I wouldn't have made the team if I was at a regular school. Making varsity was not all that lofty an accomplishment. It was exciting and I loved it, but I was no athlete."

The Web series began June 9 at an outdoor Seattle court, with King welcoming users to IfThisGuyCanDunk and boasting that it would be a very short series. He declared he would probably dunk the ball on his very first attempt, and followed that with several dramatic, slow-motion shots of him soaring toward the hoop. 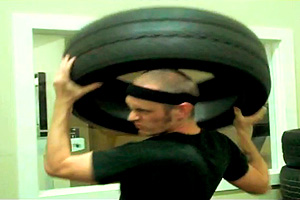 http://www.ifthisguycandunk.comJason King is doing all sorts of training, in his efforts to go above the rim.

Then you see him slam the ball against the bottom of the rim.

Shot with a flip-cam, the videos are creative and funny. To accentuate his Everyman persona, King wears everything from a 1990 Goodwill Games T-shirt to old red shorts that even Bill Clinton would deem a little too short. In Week 11 he introduced a thorough analysis by a friend who is "very good with math, science, physics, that sort of thing [who] crunched numbers and put together a simulation of what he assumed my next dunk attempt would have looked like." The viewer then sees a crude stick-figure animation that shows King clanging his head off the rim and being eaten alive by an enormous head.

"I try to make every video funny and interesting," King said. "There's definitely a lot of self-deprecating humor and I kind of mock myself throughout with cheesy music and slow-motion. … It takes a couple times to watch it to get hooked, but if I go past Sunday or Monday without a new post people get on me. 'Where's the next dunk attempt?' They want to see me succeed and they're excited to watch my progress." According to King, he has a few hundred followers online.

In a way, IfThisGuyCanDunk is the male equivalent of the Julie/Julia Project, the blog Julie Powers began at age 29 by cooking all 524 recipes in Julia Child's "Mastering the Art of French Cooking" in a single year. But instead of emulating Julia Child, King is trying to emulate LeBron James. Call it the King/King James Project.

With the help of a trainer, King has worked on building his leg strength, power and elasticity with squats, jumps, presses and even yoga. As the weeks have passed, he's gotten closer and closer. He said his vertical leap has increased 9 inches. In Week 10, the ball bounced off the backboard and through the hoop for a tantalizing near-dunk.

And then Father Time stepped into the plot. Never one to stretch, King hurt his hip during a sudden sprint, and he wasn't able to attempt another dunk for a full month.

"I never seriously considered that I wouldn't be able to do it," King said. "I just figured it would be a matter of time and not even that long a time. But that's what's really gotten interesting. All of a sudden I'm having to face my own limitations, and age is really coming into the picture in a way I didn't think it would have. So now I'm facing the possibility of, what does it mean if I don't accomplish this? It started out as kind of a fun project, but now it's facing down my fears.

"I went into this to prove something against my body, and my body is winning the battle right now."

King said he started this as a bit of a joke, but the funny thing is, his vertical leap is not the only thing that has expanded. He acknowledges that he has been "a Lebowski of sorts" throughout his life, easily distracted and rarely seeing through a goal. Until now.

"It's not so much the dunking itself," he said. "I will be happy to check that off my bucket list. But the significance of this project is just that I'm following through -- through adversity and injury and putting myself out there for people to watch and promoting myself. These are all new things for me. That will be the culmination of this project. It will be significant to show that I can start something and finish it and fulfill every goal that I set out for myself. That's something I don't do often."

King returned on Sept. 7 with another missed attempt, and instructed viewers to "Start holding your breath … 'cause it won't be long … before this guy can dunk." Will he do it? He has 10 more weeks before his birthday.

"I think, regardless of whether I get it by my birthday, I think I will continue until either my body gives out or I actually do it," King said. "To me, it's great to have a deadline, but I'm not going to put in all this work and let it go. If I don't do it, I think it will be a real good opportunity to override my natural reaction, which would be to just mark it up as a loss and move on. I think just having the progress I've accomplished has really been enough to change my outlook on myself. I'm a lot more persistent, a lot more confident, and really a lot more excited about myself.

"Like I said, this started out as more of a joke, but it's really been huge for me figuring out how it feels to follow through on something. My birthday will come and go but I'll continue."

And why not? It's a whole lot cheaper than buying a Corvette.