INDIANAPOLIS -- Myra Fleener would hate the story Bobby Plump is telling me at his restaurant outside the city. Then again, the Myra Fleener character hates pretty much anything fun in the movie "Hoosiers."

"A good friend of George Steinbrenner's came into the restaurant about 2001 or 2002, and he says to me, 'Mr. Steinbrenner has seen the movie "Hoosiers" 180 times. He sees it every time he's disappointed.' And I said, 'You mean he's only seen it 180 times?' And ['Hoosiers' screenwriter] Angelo Pizzo told me this: He said Steinbrenner has the movie in his private plane and in his houses. And he was taking Lee Iacocca to a meeting in his private plane. And he said, 'Lee, I want you to see this movie.' And Lee says, 'Ehh, what's it about? 'Well, it's about a high school basketball team.' And Iacocca says, 'I don't want to see a movie about a high school basketball team in Indiana.' Supposedly, Steinbrenner said, 'It's my plane, your free ride, so absolutely, we're watching it.'

Page 2 taps a student journalist on each Final Four campus to paint a picture of March Madness.

"On the flight back, Lee Iacocca asked whether they could watch the movie again."

Well, how about that. Even the owner of the richest, smuggest, most winning, overbearing, glorified and bullying team in the world wants to identify with the poorest, smallest and most overmatched team in movie history. (Say what you will about the Bad News Bears; at least they never had to play a man short.) It just goes to show you how powerfully "Hoosiers" resonates.

After all these years, goosebumps still rise from your arm like the pebbled grain on a basketball when Jimmy Chitwood takes that last shot for Hickory at the state championship game.

That shot was filmed 25 years ago (the movie was released the following year, in 1986) at the 82-year-old Hinkle Fieldhouse, home court of the Final Four-bound Butler Bulldogs. Little enough has changed since the filming that when you enter near the corner of the court, you can immediately picture Gene Hackman taking out the tape measure.

"You'll get people who come in and measure the free-throw line," says Bulldogs assistant coach Matthew Graves, who played at Butler in the '90s. "You'll see more people come right through the gate and they'll yell, 'Hickory.' I've yet to see anybody walk out here and put somebody on their shoulders and see if it's 10 feet, though."

Hinkle is marvelous, but an even better "Hoosiers" location is about 45 minutes east of Butler in little Knightstown, where they filmed the high school gym scenes. The old school court is now known as Hoosier Gym and the board of directors has lovingly preserved it down to the rich patina of the seven-decade-old floor, the outline of the original key, the gray paint of the bleachers and the nameplates on the scoreboard that read Hickory and Terhune. About the only thing missing is a drunk Dennis Hopper sneaking a bourbon in the corner. 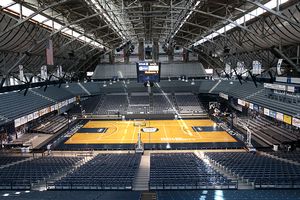 AP Photo/AJ MastButler's Hinkle Fieldhouse, the site of the state title game in "Hoosiers," is a National Historic Landmark.

And it's all wonderful. Hoosier Gym is the Field of Dreams for basketball, its Hardwood of Dreams. Instead of players walking in from the cornfields, you expect to see the team running onto the court while the pep band plays and the entire town roars its support.

Leave the damn thing alone, and they will come!

"It looks like you're in the movie and Jimmy Chitwood is standing here shooting jump shots when you walk in," Jonathan Rock says as he looks around the gym with a smile. He's an assistant basketball coach at Norwich University who brought his father, John, all the way from Vermont to the Final Four as part of a Christmas present. "The locker room is the same. You can picture them getting mad at the coach for making them pass the ball four times."

Hoosier Gym board of directors president Merv Kilmer tells me about a Japanese woman who broke down in tears when she visited, and then fellow board member Neil Shaneyfelt tops that one. "On Mother's Day, we had a family bring their grandmother here in a wheelchair," says Shaneyfelt. "She watches the movie all the time. They had taken her to Elvis' hometown and to Graceland and they said she was more overwhelmed by this gym. She was in her 80s, but she insisted on being helped out of the wheelchair so she could stand up and shoot a basket."

INDIANAPOLIS AND THE FINAL FOUR

I'm not sure how many times I've seen the movie, but I vividly remember that the night before my softball team played for the University of Washington intramural championship, we watched a tape of "Hoosiers" for inspiration. Actually, we played for the championship several times, but the only time we won, we watched "Hoosiers." Rock says his team often watches the movie on the bus to games. No wonder major league teams regularly fire up their fans by showing Hackman's pregame speech on their video boards in the final moments of a game. "I don't care what the scoreboard says at the end of this game. In my book, we're going to be winners!" Which, come to think of it, is kind of an odd speech to use for rallying up a crowd in the final inning given that he is basically saying that the final score doesn't matter. But what the heck. Norman Dale inspires people even better than the Rally Monkey.

But just what is that exactly? Yeah, "Hoosiers" tells an enjoyable story of David and Goliath in which -- spoiler alert! -- Hickory overcomes everything to win. But it's not like that isn't the storyline to almost every single sports movie ever made. So why does "Hoosiers" inspire 80-year-old women to rise from their wheelchairs as if at a revival?

For one thing, we want to believe the underdog can finish on the very top, and in this case, it truly did. The fictional Hickory story is loosely based on the little Milan High School team that won the 1954 Indiana state championship. And Chitwood's final shot is taken directly from the game-winning basket that Plump sank to become the sort of Indiana legend that so bothers Myra Fleener.

"You know, a basketball hero around here is treated like a god. How can he ever find out what he can really do? I don't want this to be the high point of his life. I've seen them, the real sad ones. They sit around the rest of their lives talking about the glory days when they were 17 years old." 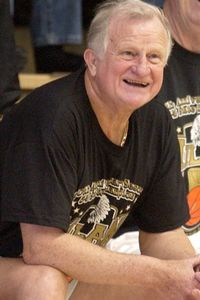 Yeah, whatever, Myra. Go write up some students for smiling in the hallway. Far from being forever trapped in a small town, basketball took Plump from the Midwest to the Middle East on a touring team. He is 73 now and says he tells the story of his shot at least three or four times a day. And he is more than happy to do so until his voice grows so hoarse you would think he had spent all day yelling at his players to pass the ball four times. In fact, his bar is named "Plump's Last Shot," and he's a terrific host as he provides drinks and shares stories about Milan and the making of "Hoosiers."

"What the movie really has done is taken the story of Milan and the Miracle of Milan and all that stuff and taken it international," Plump says. "For an example, when the World Games were here in 2003, I was standing up at the bar and a group of people came that I knew were from a foreign country. They happened to be from Spain. They were three players and a national magazine writer, and they wanted to know whether they could talk to me. In the interview, one of the players reached over and told me through the interpreter: 'You're the reason I played basketball. I saw the movie "Hoosiers." I looked up Milan. I looked up your history, and I wanted to be a basketball player.'"

Barbara Hershey is a wonderful actress, but she also landed the regretful parts of two bizarre women determined to derail promising sports careers. As Myra in "Hoosiers," she wants to keep Chitwood off the team to keep him from being nothing but a local god. In "The Natural," she shoots Roy Hobbs in the gut out of some twisted notion that he is already a god and must be destroyed. (She's nuts.) At least in "Hoosiers" she comes around in the end before firearms enter the script.

"One of the really great scenes is in the church meeting when Barbara Hershey is sitting there and she has this great conflict," Kilmer says at Hoosier Gym. "She hates Norman Dale being there at the same time she is gradually falling in love with him. And they take this vote to fire him, and she stands up and says, 'I think we should give him a chance.' And that's so moving when she says it."

"When Angelo Pizzo was here, he said a theme many people miss is that it's a movie about second chances. And if you keep that in mind as you watch the movie, there are four different people who are given another chance in life. And that resonates with people. It's the person who has been overlooked or fired or whatever, but they're given a second chance."

My friend Rod says the movie really resonates only with middle-aged white guys who want to remember the supposed innocence of a time gone by. He may have a point. In fact, an even better story about Indiana high school basketball could be told about the team that won the state championship the year after Milan. Led by Oscar Robertson, Indianapolis' Crispus Attucks team became the first all-black team in the nation to win a state title.

Still, I think my friend has a little too much Myra Fleener in him. He also forgets that he was with our team that night we watched "Hoosiers" to inspire us before our intramural championship game. So while I would love to see a movie about the Crispus Attucks squad, until then I'm perfectly content to keep watching "Hoosiers" until I memorize the script so well that if it were chewing a stick of gum, I'd know what flavor.