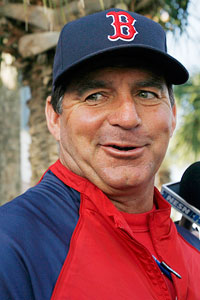 In the time it has taken John Isner and Nicolas Mahut to play their match at Wimbledon, you could have watched the Kirsten Dunst movie "Wimbledon" six times. But I don't know why you'd want to. Watching it once is difficult enough.

Bruce Hurst can sympathize with Isner and Mahut. The former pitcher was part of the longest game in professional baseball history, a 33-inning, eight-hour-and-25-minute game between the Triple-A Pawtucket Red Sox and Rochester Red Wings in 1981.

The teams played 32 innings April 18 before the game was suspended shortly after 4 a.m. They resumed the game the next time the teams faced each other, on June 23, and it only took one inning for Pawtucket to score the winning run for the 3-2 victory.

"We went through a lot of emotions," Hurst said. "After about 14 or 15 innings, we were like, 'C'mon, we're cold, let's get this thing over with.' But after the 18th or 19th inning, we got our second wind and started wondering what the record was for the longest game in league history, what was the longest game in baseball history. One of the guys went into the office and got the record book and saw the league record was 24 innings and we said, 'We can play five more innings."'

The game is legendary for several reasons in addition to its length.

Also see:
• Hruby: I got served by John Isner

For one thing, it included two future Hall of Famers, Cal Ripken Jr. and Wade Boggs, along with future major leaguers such as Hurst, Bobby Ojeda, Marty Barrett and Rich Gedman. Then there are just the interesting stories associated with it.

The timing: By the time they resumed the game nearly two months later, the major league players had gone on strike, so the game became a focal point for sportswriters. "The minors were the only pro games going in America, so we were big news," Hurst said. "We had media from all over the world. We had media from Europe and Japan. Guys from Europe who had never seen the game before were there so we were trying to educate them."

The weather: "It was unbelievably cold," Hurst said. "The wind was blowing straight in. A couple balls that were just crushed got up in that wind and fell straight down. There were no heaters, but they had these big 55-gallon drums they used as trash cans. We were taking the broken bats and burning them in the drums. It was just a cold, cold night, with no relief and the wind cutting through you." 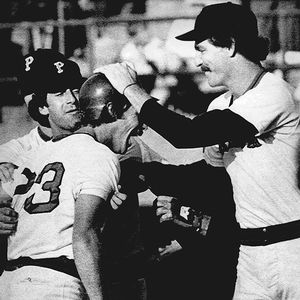 AP Photo/Paul R. BenoitPawtucket's Dave Koza gets a pat on the head from teammate Mike Smithson after driving in the winning run in the bottom of the 33rd inning.

The performances: Rochester's Jim Umbarger took the mound to begin the 23rd inning. And then threw 10 scoreless innings of relief. Hurst took the mound in the 28th inning and pitched five scoreless innings. "I pitched the 2:30-4 shift," he said. "I struck out Cal Ripken on a 3-2 curve at 4 a.m. I think a 3-2 curve at 4 a.m. is a pretty good pitch."

The oddities: Steve Grilli, who took the loss for Rochester when the game was resumed, wasn't with the team when the game began in April. Rochester outfielder Dallas Williams went 0-for-13, the biggest oh-fer in baseball history. But those 13 at-bats didn't show up on his record until the game was completed "He knew he had an 0-for-13 coming on this thing so he was scrambling to get his average up high to keep it from taking a huge dip," Hurst said.

Here's another thing. The game should have been suspended because of the International League's 1 a.m. curfew, but Hurst says for some reason the umpire's rulebook did not have the page with the curfew information. So the team spent the night tracking down the league president to have him suspend the game. By the time they did, Hurst said, it was 4 a.m. "If they hadn't suspended the game when they did, I wonder if we would have played until the next day's game started?"