Consider the entries in our Top 100 Sports Movie Lines as a 100-meter dash. Here is the marathon. Our Top 10 sports movie monologues.

10. "Don't say that! Please! That is the worst, most stupid thing anyone could say! Cause it quite clearly isn't 'only a game.' I mean if it was, do you honestly think I'd care this much? Eh? Eighteen years! Eight-teen years! Do you know what you wanted 18 years ago? Or 10? Or five? Did you want to be Head of Year at North London Comprehensive? I doubt it. I'd doubt if you wanted anything for that long. And if you had, and if you'd spent three months thinking that finally, FINALLY you were gonna get it and just when you think it's there it's taken away from you. ... I mean I don't care what it is, a car, a job, an Oscar, the baby ... then you'd understand how I was feeling tonight." 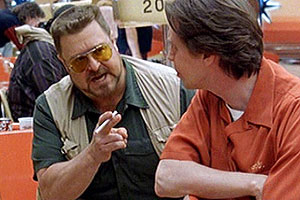 Gramercy Pictures Walter Sobchak's love of bowling was clear to his friends, even when he was eulogizing one of them.

9. "Donny was a good bowler, and a good man. He was one of us. He was a man who loved the outdoors ... and bowling, and as a surfer he explored the beaches of Southern California, from La Jolla to Leo Carrillo and ... up to ... Pismo. He died, like so many young men of his generation, he died before his time. In your wisdom, Lord, you took him, as you took so many bright flowering young men at Khe Sanh, at Langdok, at Hill 364. These young men gave their lives. And so would Donny. Donny, who loved bowling."

8. "You know, when you get old, in life, things get taken from you. I mean, that's part of life. But, you only learn that when you start losing stuff. You find out life's this game of inches, and so is football. Because in either game -- life or football -- the margin for error is so small. I mean, one half a step too late or too early and you don't quite make it. One half second too slow, too fast and you don't quite catch it. The inches we need are everywhere around us. They're in every break of the game, every minute, every second. On this team we fight for that inch. On this team we tear ourselves and everyone else around us to pieces for that inch. We claw with our fingernails for that inch. Because we know when we add up all those inches, that's gonna make the f---ing difference between winning and losing! Between living and dying! I'll tell you this, in any fight it's the guy whose willing to die whose gonna win that inch. And I know, if I'm gonna have any life anymore, it's because I'm still willing to fight and die for that inch, because that's what living is, the six inches in front of your face.

"Now I can't make you do it. You've got to look at the guy next to you, look into his eyes. Now I think ya going to see a guy who will go that inch with you. Your gonna see a guy who will sacrifice himself for this team, because he knows when it comes down to it you're gonna do the same for him. That's a team, gentlemen, and either we heal, now, as a team, or we will die as individuals. That's football guys, that's all it is. Now, what are you gonna do?"

-- Coach Tony D'Amato (Al Pacino) in "Any Given Sunday"

7. "Well, you know I ... I never got to bat in the major leagues. I would have liked to have had that chance. Just once. To stare down a big league pitcher. To stare him down, and just as he goes into his windup, wink. Make him think you know something he doesn't. That's what I wish for. Chance to squint at a sky so blue that it hurts your eyes just to look at it. To feel the tingling in your arm as you connect with the ball. To run the bases -- stretch a double into a triple, and flop face-first into third, wrap your arms around the bag. That's my wish, Ray Kinsella. That's my wish. And is there enough magic out there in the moonlight to make this dream come true?"

6. "There's a moment of orderly silence before a football play begins. Players are in position; linemen are frozen, and anything is possible. Then, like a traffic accident, stuff begins to randomly collide. From the snap of the ball to the snap of the first bones, closer to four seconds than five. One Mississippi -- Joe Theismann, the Redskins quarterback takes the snap and hands off to his running mate. Two Mississippi -- it's a trick play, a flea-flicker. And the running back tosses it back to the quarterback. Three Mississippi -- up until now the play's been defined by what the quarterback sees; it's about to be defined by what he doesn't. Four Mississippi -- Lawrence Taylor is the best defensive player in the NFL. And has been from the time he walked onto the field as a rookie. He will also change the game of football as we know it. Legendary quarterback Joe Theismann never played another down of football.

"Now, y'all would guess that more often than not, the highest paid player on an NFL team is the quarterback. And you'd be right. But what you probably don't know is that more often than not, the second highest paid player is, thanks to Lawrence Taylor, a left tackle. Because, as every housewife knows, the first check you write is for the mortgage, but the second is for the insurance."

-- Leigh Anne Tuohy (Sandra Bullock) narrating the opening to "The Blind Side" while we see replays of Taylor snapping Theismann's leg as if it was in a pencil sharpener.

5. "I believe in the Church of Baseball. I've tried all the major religions, and most of the minor ones. I've worshipped Buddha, Allah, Brahma, Vishnu, Siva, trees, mushrooms and Isadora Duncan. I know things. For instance, there are 108 beads in a Catholic rosary and there are 108 stitches in a baseball. When I heard that, I gave Jesus a chance. But it just didn't work out between us. The Lord laid too much guilt on me. I prefer metaphysics to theology. You see, there's no guilt in baseball, and it's never boring ... which makes it like sex. There's never been a ballplayer slept with me who didn't have the best year of his career. Making love is like hitting a baseball: You just gotta relax and concentrate. Besides, I'd never sleep with a player hitting under .250 ... not unless he had a lot of RBIs or was a great glove man up the middle.

"You see, there's a certain amount of life wisdom I give these boys. I can expand their minds. Sometimes, when I've got a ballplayer alone, I'll just read Emily Dickinson or Walt Whitman to him, and the guys are so sweet, they always stay and listen. 'Course, a guy will listen to anything if he thinks it's foreplay. I make them feel confident, and they make me feel safe, and pretty. 'Course, what I give them lasts a lifetime; what they give me lasts 142 games. Sometimes it seems like a bad trade. But bad trades are part of baseball -- now who can forget Frank Robinson for Milt Pappas, for God's sake? It's a long season and you gotta trust. I've tried 'em all, I really have, and the only church that truly feeds the soul, day in, day out, is the Church of Baseball." 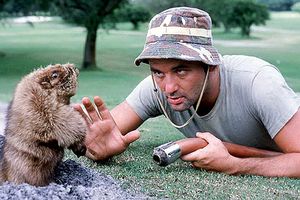 Orion PicturesBill Murray as Carl Spackler in "Caddyshack," which came out 32 years ago.

4. "What an incredible Cinderella story, this unknown comes outta nowhere to lead the pack, at Augusta. He's on his final hole, he's about 455 yards away -- he's gonna hit about a 2-iron, I think. Oh, he got all of that! The crowd is standing on its feet here, the normally reserved Augusta crowd -- going wild -- for this young Cinderella. He's come outta nowhere. He's got about 350 yards left. He's gonna hit about a 5-iron, don't you think? He's got a beautiful backswing -- that's -- oh he got all of that one! He's gotta be pleased with that. The crowd is just on its feet here ... He's the Cinderella boy, uh -- tears in his eyes I guess as he lines up this last shot, he's got about 195 yards left. He's got about a -- it looks like he's got about an 8-iron. This crowd has gone deathly silent, the Cinderella story, outta nowhere, a former greenskeeper now, about to become the Masters champion. It looks like a mirac- … it's in the hole! It's in the hole!"

3. "Ray, people will come, Ray. They'll come to Iowa for reasons they can't even fathom. They'll turn up your driveway, not knowing for sure why they're doing it. They'll arrive at your door as innocent as children, longing for the past. 'Of course, we won't mind if you have a look around,' you'll say. 'It's only 20 dollars per person.' They'll pass over the money without even thinking about it; for it is money they have and peace they lack. And they'll walk out to the bleachers, and sit in shirt sleeves on a perfect afternoon. They'll find they have reserved seats somewhere along one of the baselines, where they sat when they were children and cheered their heroes. And they'll watch the game, and it'll be as if they'd dipped themselves in magic waters. The memories will be so thick, they'll have to brush them away from their faces.

"People will come Ray. The one constant through all the years, Ray, has been baseball. America has rolled by like an army of steamrollers. It has been erased like a blackboard, rebuilt and erased again. But baseball has marked the time. This field, this game: It's a part of our past, Ray. It reminds of us of all that once was good and it could be again. Oh, people will come Ray. People will most definitely come."

2. "Well, I believe in the soul, the c---, the p----, the small of a woman's back, the hanging curveball, high fiber, good scotch, that the novels of Susan Sontag are self-indulgent, overrated crap. I believe Lee Harvey Oswald acted alone. I believe there ought to be a constitutional amendment outlawing AstroTurf and the designated hitter. I believe in the sweet spot, soft-core pornography, opening your presents Christmas morning rather than Christmas Eve and I believe in long, slow, deep, soft, wet kisses that last three days. [Pause] Good night."

1. "You know, I used to think I was a really great quarterback in high school. Still think so, too. Can't even bring myself to light a cigarette because I keep thinking I have to stay in shape. You know what really gets me though? I mean, here I am, I have to live in this stinking town, and I gotta read in the newspapers about some hot-shot kid, new star of the college team. Every year, it's going to be a new one. And every year it's never going to be me. [Pause] I'm just going to be Mike. Twenty-year-old Mike. Thirty-year-old Mike. Old, mean old man, Mike. These college kids out here are never going to get old or out of shape. Because new ones come along every year. And they're going to keep calling us Cutters. To them, it's just a dirty word. To me, it's just something else I never got a chance to be."

-- Mike (Dennis Quaid) in "Breaking Away"