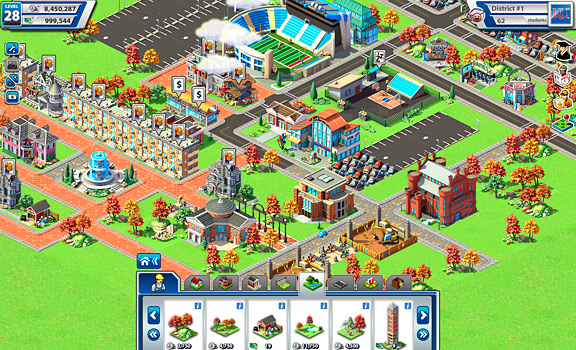 PlaydomESPN joins the social gaming craze with the launch of ESPNU College Town.

EUGENE, Ore. -- Five years ago, I embedded myself on college campuses for a Page 2 March Madness tour, visiting and living (and drinking) at schools competing in the NCAA tournament. I attended classes (I received a C on a midterm at the University of Illinois), played beer pong until I was Patient Zero for every known virus in the country, and slept in fraternities, sororities, dorms, independent apartments and houses even more crowded, filthy and appalling than the house I shared with six women and four guys when I was a sophomore at the University of Washington.

In other words, I had a blast (even when I was tear-gassed at Michigan State), drinking more in those three weeks than I did during my five-plus years in college. I also received e-mail after e-mail from readers in their 30s, 40s and 50s who said they were vicariously reliving their own college days through my travels and also offering to do anything so they could join me.

• ESPNU College Town is free to play on Facebook, with premium upgrades available via micro-transactions.

Well, it's too late for that but you can try something that will be easier on your liver: ESPNU College Town, a new social game created in collaboration with Disney-owned Playdom, Inc., launched Sept. 27 on Facebook. Facebook users can play the game at: http://apps.facebook.com/espnucollegetown/.

ESPNU College Town will allow you to build your own virtual college campus and your own athletic department. You can reconnect with old college friends, make new ones, get excited for the big game, brag about your school, rag on your rival and in general relive college life as much as possible from an office cubicle. Best of all, you won't have to study for midterms. (Well, you can, but you'll come off as even more of a geek.)

"If you're on Facebook, it's hard to miss the newsfeed posts about games like FarmVille and Mafia Wars," said Mike Bucklin, Integration Manager for ESPN Games. "Millions of people play these games, but they didn't do much for us sports fans. Instead of being a farmer looking over a plot of land, we thought it'd be cool being an athletic director looking over a campus. We spoke with Playdom and they had a very similar concept in mind. The idea of a virtual athletic director was born, which eventually grew into ESPNU College Town."

Don't worry -- there are no ridiculous farm animals to collect in ESPNU College Town, unless you count Washington State mascot Butch T. Cougar and the Oregon Duck.

That last line, naturally, was a gratuitous slap at two of my alma mater's rivals. Which is appropriate because part of ESPNU College Town is talking trash about your rivals.

"It's exactly that type of rivalry we're capturing in this game," said ESPNU College Town senior producer Jay Arrera. "That's the thing about social games with Facebook -- it's about building and maintaining relationships with people who all have a common experience. If you have friends who all went to the University of Oregon, here's where you can build back your friends by playing this game and you're all representing and competing with the University of Oregon, or your co-workers who all went to different schools trying to show who's actually better."

Arrera is a natural fit to help develop such a game. He grew up in one college town (Corvallis) and went to school in another (Eugene). He still lives and works in Eugene, which may just be the best college town in America (the Washington alumni association will probably revoke my membership for saying such a thing). In fact, Eugene is such a great college setting that "Animal House" was filmed there. Arrera studied fine art, business and engineering at the University of Oregon, a perfect mix for a career in game design, which wasn't really even a field when he entered college. 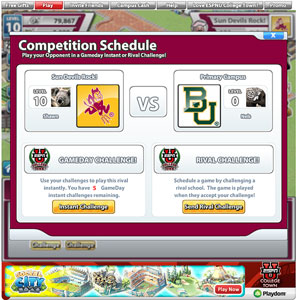 Playdom Build your college athletics program and go head to head with friends.

Because Arrera lives in Eugene, he can still take in the whole college atmosphere -- or as much as possible with a wife, a young son and deadline pressure -- and he hopes College Town will allow others to replicate their college experience, minus the vomit stains on the carpet, the disgusting mystery meat rotting in the fridge and the stale beer odor everywhere.

Arrera says you start ESPNU College Town with a couple of basic buildings and fields, and it's up to you to grow your school the way you want it. You can focus on academic buildings in an attempt to become a virtual Harvard without the entrance requirements, the course demands or the life-crippling student loans. Or you can just buy up as many players and athletic facilities as possible -- not that it would ever happen in real life.

"The goal is to build the biggest, most dominant campus possible," Arrera said. "You can buy your own custom buildings and decorate the campus to make it how you either remember your campus or wish your campus had looked. The buildings upgrade, so as you play the game, the buildings get more elaborate and look like more traditional Ivy League schools and the stadiums go from little fields to massive stadiums with lights and JumboTrons. The stadium grows and evolves as you play the game."

You can add iconic features at existing colleges (say Cal's Sather Tower or Pitt's Cathedral of Learning). You can tailgate for your football games at Texas' Royal Memorial Stadium. Your teams can wear maize and blue (Michigan), crimson and cream (Oklahoma) or, if you're a truly pathetic case, crimson and gray (Washington State -- sorry, Cougars, I can't help myself).

Another element is recruiting fictional all-star athletes by obtaining player cards, each with their own skills and abilities. These players compete against players from other schools, with the results compiled in conference standings. And in the finest tradition of college athletics, they don't have to go to class. Academics aren't a part of ESPNU College Town, though academic facilities are. Part of the algorithm for deciding the outcome of a game is the "happiness" of your student body. Spend all your money on athletics with little or nothing for the general student body (sufficient classrooms, residences and social activities), and your team will pay for it on the field. 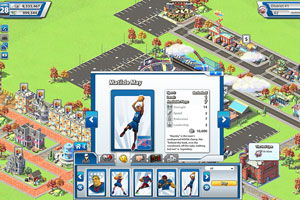 PlaydomWhat's the right mix of academics and athletics for your college town?

"That was deliberate," Arrera said. "If we just wanted people to buy player cards, we just would have made a card game. That's part of the gender issue, having something for both men and women."

Frankly, I don't know who has the time to play social media games, what with all the other demands of determining your fantasy team roster and filling out your college bowl and NCAA brackets. But evidently, a lot of people do. According to data from Nielsen, social games are growing faster than any other category in the games industry and they just passed e-mail as the second most popular online activity. Of course, you probably know this already because these people keep offering you another pig.

"I'm most looking forward to receiving a request from a friend that isn't about a cow or pig," Bucklin said. "If someone asks me to help bring 'College GameDay' to their campus, I'm going to be all about it. If a friend needs help throwing the all-time epic tailgate of tailgates, let's go. With this game, I think we have the opportunity to change some of the negative stigmas associated with social games and to maybe even make them cool."

Arrera said the biggest challenge in creating ESPNU College Town is knowing "what 'done' is. Knowing what is enough." But that's OK, because knowing what is "enough" is the eternal challenge that has led to so many hangovers and vomited-stained sheets on campuses across America. Plus, if your virtual college gets out of control, the folks from NCAA Investigation Town will let you know.