Bringing back the multipurpose stadium

Remember those quaint old days when communities saved taxpayer money by building stadiums that were shared by baseball and football (and occasionally basketball) teams? Well, now that team owners have all but eradicated the country of those dreadful multipurpose stadiums, they want them back again.

Well, they don't exactly want them back -- they just want the additional revenue from hosting other sports in their already-lucrative, almost-only-baseball ballparks.

This past weekend, the Cubs squeezed an Illinois-Northwestern football game into Wrigley Field (providing new meaning to the friendly "confines''), and they want to hold more football games in the future. Wrigley also hosted the NHL's Winter Classic, as did Fenway Park. New Yankee Stadium hosted the Army-Notre Dame football game this past Saturday and will host the Pinstripe Bowl next month, bringing New York fans their long-awaited dream matchup between the fourth-place team in the Big East and the seventh-place team in the Big 12. In San Francisco, the home of baseball's new world champions will in January host the Fight Hunger Bowl, whose pregame festivities I assume will include a fasting contest between the two offensive lines.

Imagine. Playing multiple sports in one stadium! What a concept! I don't know where the teams could have come up with such an idea, but the possibilities are endless. If teams get just a little creative, they can maximize revenue by bringing thousands of new fans to their stadiums to see a wide variety of crossover events:

Seattle. The Mariners, Seahawks and Sonics all used to play in the Kingdome. The Kingdome is no more, the Seahawks play in a $350 million football stadium without a roof, the Mariners play in a $517 million ballpark with a roof and the Sonics moved to Oklahoma because their arena, specifically renovated to their demands at a cost of $75 million, supposedly wasn't large enough to suit the NBA. The Mariners could rectify this situation with an ingenious stadium proposal. They bring the NBA back to Seattle by letting a team play at their ballpark, which has more than enough seats to satisfy the league. At the same time, the Mariners will move into the Sonics' former basketball arena. With 120-foot foul lines and 150-foot power alleys, the Mariners will cure the game's worst offense. Free agents will flock to the Mariners for the chance to hit 100 to 200 home runs in a season. And next year, grumpy old baseball writers will gripe when Felix Hernandez wins the Cy Young with a 28-4 record and a 13.98 ERA.

Tampa Bay: Those catwalk rings above the field might cause all sorts of issues for baseball, but they are just the ticket for another possible sport -- Quidditch. Pro: Harry Potter's enormous popularity guarantees bigger crowds than the Rays. Con: Occasional deaths by falling when competitors' brooms fail to fly. (But it would still be safer than the NFL.)

New York: In addition to hosting the Pinstripe Bowl and Army-Notre Dame games, the Yankees can boost revenue by renting out Monument Park to extreme sportsmen who want to attempt the ultimate challenge in free climbing -- summiting the Steinbrenner plaque. The Yankees also can hold the annual Belmont horse race around the ball field, which will have several benefits. One, by arming the jockeys, they can serve as mounted security to keep fans off the field. Two, this would allow Alex Rodriguez to compete for the Triple Crown with his centaur avatar.

Minnesota: The Twins can increase revenue streams by planting corn in the outfield. Pro: Fans get a true "Field of Dreams'' experience each inning when players disappear and reappear from the cornfield. Drawback: The Yankees will simply harvest the crop every year.

Arizona: The Diamondbacks can host the U.S. swimming championships in their pool beyond the right-field fence. Because it's considerably smaller than Olympic size, this would require some adjustments. For one thing, Michael Phelps better work on his kick turns. For another, things could get a little crowded on the ice when they freeze the pool for the Winter Classic.

Boston: Think of the Green Monster as the world's most challenging parkour course.

Cleveland and Cincinnati: The Cubs made Wrigley Field work for football by having teams run to the same end zone whenever they changed possession. Cleveland and Cincinnati will take this to new extremes by each hosting half of a football game. The Ohio State offense will play in Cincinnati, and the Buckeyes' defense will play in Cleveland. And as a bonus, the band will march between the two cities, allowing every fan in the state a chance to dot the "i" in script "Ohio" along the way.

Milwaukee: The Brewers can bring the Winter Olympics to Wisconsin by holding Nordic skiing, hockey and figure skating on the field, and ski jumping down the Bernie Brewer slide.

Detroit: The Cubs had trouble squeezing a football field into Wrigley, but that isn't an issue at the Tigers' spacious stadium. In fact, with the center-field fence 420 feet from home plate, they can help the Lions' bad defense by making the field 120 yards long.

Los Angeles Dodgers: The team can combine fans' love for scoreboard races and the city's love affair with the automobile by holding the Dodger Stadium 500 -- a 500-lap NASCAR race around the ballpark. The winner, of course, is the first car out of the parking lot before the seventh inning.

Here's how this game works. Each week, you get a fragment from an old box score and must solve the mystery of what game it was from and why it was significant. I give this one a difficulty rating of 6. Answer at the bottom of the column. 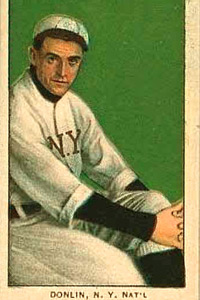 Piedmont and Sweet CaporalGobble, gobble to you with a little help from our friend "The Turkey."

This century-old card (Piedmont and Sweet Caporal) is of Mike Donlin, who was a career .333 hitter and a bit of a party animal. He's the card of the week because of his nickname, "Turkey," supposedly gained from his distinctive, turkey-like gait and not because superstitious teammates stuffed him with bread crumbs, mushrooms and herbs in a bizarre pregame ritual. Happy Thanksgiving, everyone!

Dodgers fans should have recognized this as the game Orel Hershiser broke Don Drysdale's consecutive scoreless innings record. It was Hershiser's final start of the 1988 regular season, and he needed 10 scoreless innings to break the record. That normally would be a problem, but in one of those serendipitous moments baseball so often delivers, the Dodgers were shut out for nine innings, allowing Hershiser to pitch a scoreless 10th inning and break the record with 59 consecutive innings. (In a side note, I included Drysdale's streak in a column I wrote early in the 1988 season about baseball's unbreakable records. I might have been the last person to claim Drysdale's record was unbreakable. By the end of that 1988 season, I learned to be very careful about using the term "unbreakable.")