Davidson's other star, off the court

Seven months of sweeping and draining a pothole-laden outdoor basketball court, one of the few courts that exist in Benin City, Nigeria. Occasionally the teenager managed to sneak in a few shots before the older players arrived and forced the "cleaning kids" to watch from the sidelines. If the younger hopefuls had on basketball shoes or clothing, the older players took them. So most of the time, he went home without his shoes or T-shirt. Still, like many of the children of Benin City, he waited for a chance to play. 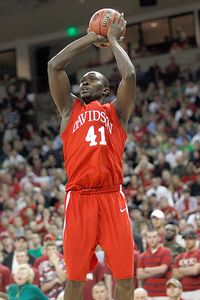 Rex Brown/Getty ImagesDavidson hoopster Andrew Lovedale had to wait his turn on his home court in Nigeria.

And one spring afternoon Andrew Lovedale was given his chance, when a player was injured and another pointed to Lovedale, signaling his entrance. Before stepping onto the court, an older player, Philip, stopped him. "Pass the ball," Philip said. "If you shoot it, I'll kill you."

The game was tied when Lovedale's team took possession with six seconds left. When he got the ball, he did the only thing he wanted to do. He shot the ball.

"I didn't even look to see if I'd made it," Lovedale said. "I just took off running toward home, hoping that he [Philip] wouldn't come after me."

Lovedale was several yards away when his teammates called him back. The shot had fallen and they'd won the game. Lovedale walked back toward the court, a slow smile creeping over his face, before he felt a hard swat on the back of his head.

"Don't do that again," Philip said, before adding, with a wry smile, "You're lucky you made that."

Lovedale grew up the ninth of 10 children to Lovedale Lovedale and his wife, Delphine, in Benin City. Both his parents were athletes: his mom a state champion pingpong player; his dad a semi-pro soccer player. But a serious injury forced his father into early retirement, and instilled the household ethos that academics, not athletics, would be the children's focus. Lovedale loved to study but, like his four brothers, had a tall, athletic build. Still, sports were forbidden.

"The only sports we were allowed was 20 minutes of soccer a day in our backyard," Lovedale said. He'd never seen or heard of American football until, as a teenager, he visited his older brother in England and watched the movie "Remember the Titans."

Lovedale Lovedale died in 2000 of a heart attack. Afterwards Delphine allowed her children to play sports as an outlet for their grief, and Andrew's older brother Michael bought him a basketball. He began taking his ball to the local court, and soon joined the ranks of young boys waiting for their turn to play.

Several months after he was allowed into his first game, Lovedale traveled to London to visit one of his brothers. He also stopped by the Amaechi Basketball Centre in Manchester (named after former NBA player John Amaechi). Lovedale realized that through the Centre, he could obtain a great education and play basketball. After discussing it with his family, he applied for enrollment.

Lovedale began playing in the English Basketball League for the Manchester Magic, under the tutelage of veteran coach Joe Forber. Forber, a well-respected coach internationally, saw Lovedale's potential despite his inexperience. "Joe's word is the Bible to me," Davidson College men's basketball coach Bob McKillop said. "He said Andrew had a tremendous upside and work ethic, and I trusted him."

After several visits to the Centre, McKillop offered Lovedale a scholarship, which he accepted without having ever visited the United States. Former Davidson player and current assistant coach Terrell Ivory was playing in Manchester at the time with Andrew. "He talked to me a lot about how I'd get a great education, learn basketball, and Coach McKillop would be like a dad to me," Lovedale said. So, he went. 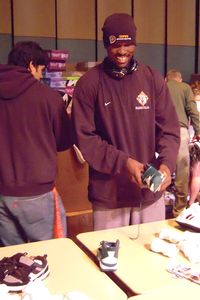 Courtesy of Bill GiduzSafe to say Lovedale's making an even bigger impact off the court than he has on it.

Upon arriving at Davidson, Lovedale's first trip was to Belk Arena. "I walked in and it was nothing like I'd ever seen before," he said of the 5,223-capacity basketball stadium. "I was like, 'Wow, we're going to play basketball here. How do they fill the seats? Who comes to watch?' But I learned pretty quickly."

Lovedale's freshman year was spent improving his basketball IQ and adjusting to life in the U.S. "Off the court, he's this quiet, humble guy who goes about his business," teammate Bryant Barr said. "But on the court, he's an animal."

At the end of his freshman season, Lovedale noticed several pairs of lightly used shoes lying around the locker room, and asked his teammates if they'd give him their extra pairs to take back to Nigeria. Typically, said McKillop, the team donated leftover shoes and T-shirts to the college staff or a local charity. Lovedale's teammates were happy to contribute, and he returned home that summer with 20 or so pairs.

Lovedale asked again at the end of his sophomore season. As teammate Stephen Curry told the story, "I was cleaning out my locker after we'd lost to Maryland my freshman year in the first round of the NCAA tournament. I had six, seven pairs of shoes I'd gone through throughout the year. Andrew came in with a box, said he was going home, and that if we had extra shoes and shirts he'd like to take them back to Nigeria. I didn't know what I was going to do with the shoes, so I threw them in there."

What seemed like a simple act to the team was a growing mission in Nigeria. When Lovedale returns -- as he's now done the past three seasons, and will again this June -- he doesn't just pass out shoes. He sits down with the young boys and girls, talks to them about their lives and counsels them concerning their futures. "Most of these kids don't even go to school, or they play basketball during school hours," Lovedale said. "I tell them if they want to play ball in the U.S., they need to have the grades, too. It makes them think twice."

Children like Uche Gift are listening. Lovedale met Gift, a teenager from Lagos, after giving him a pair of shoes during his first trip home. The two started an e-mail correspondence that covers everything from basketball skills to Gift's grades. A few months ago, Gift called Lovedale and asked him to bring practice SAT tests with him this summer. "[Lovedale] is the kind of person that you feel free to talk to and he is always ready to listen," Gift said. "During your interaction with him, you wish that the interaction doesn't come to an end. … He is making the Nigerian youth believe in themselves and their dreams."

"My first year [Gift] only wanted sneakers, but now I feel like he's a part of my life," Lovedale said. "He's like another brother to me. To be able to see someone like that, and how he's changed, it's great."

Lovedale has inspired change not only throughout Nigeria but at Davidson as well. As word spread of his mission, the local Methodist Church raised funds for the purchase of more than 40 pairs of shoes and 20 basketballs last spring. Lovedale had more equipment than he could fit in his luggage, even with extra checked baggage. 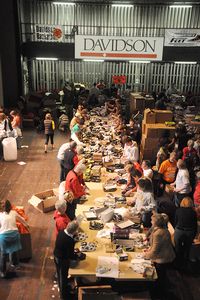 In December, USA Today ran a story about Lovedale's work collecting shoes. Samaritan's Feet founder Emmanuel "Manny" Ohonme read the article and contacted Lovedale. Ohonme began Samaritan's Feet in 2003 as a nonprofit dedicated to changing lives through shoe distribution around the world. The organization's goal is to outfit and aide 10 million impoverished children in the next decade. So far, the Charlotte-based nonprofit has distributed close to 3 million pairs of shoes.

Ohonme told Lovedale he'd like to help out and join him on his next trip home. On Feb. 21, the Wildcats hosted "Kicks from 'Cats -- The Andrew Lovedale Shoe Drive" before Davidson's nationally televised game against Butler. The athletic department sold T-shirts, with the proceeds going toward shipping shoes to Nigeria. In addition, fans attending the game were asked to bring a new pair of basketball shoes for collection. And community members and students volunteered to box up the shoes and write notes to the recipients. Lovedale watched in disbelief at the cumulative effort, but continued on his quiet path of giving, hesitant to take credit for the mounting success of what began as one suitcase of shoes.

"Whenever he has a chance to help someone, he makes that extra effort," Curry said. "There aren't many people you find like that."

In a few weeks, Lovedale, Ohonme and several volunteers will travel to Nigeria for 10 days. Beginning on June 5, they'll visit Benin City and Lagos to distribute the goods, while also educating the children, offering health clinics and hosting basketball tournaments.

And the total pairs of shoes to be distributed? More than 10,000.

"I never realized in my wildest dreams that it could grow to what it has grown," McKillop said. Lovedale's teammates have also been amazed at his progress. "He mentioned his idea in the first couple months of school, about his inclinations to help kids in Nigeria who are in need," said his teammate, good friend and roommate of the past three years, Can Civi. "I kind of laughed at him and was like, 'Come on man, you can't save the world.' But it actually came through. He's doing it right now."

Lovedale ended his career at Davidson as just the 11th player in school history with more than 800 career points and 700 rebounds, while breaking school marks for career games played and blocked shots in a single season. He finished this season ranked 17th in the Southern Conference in scoring (12.5 ppg), tied for first in rebounding (8.7 rpg) and second in blocked shots (1.5 bpg) en route to earning all-league honors. 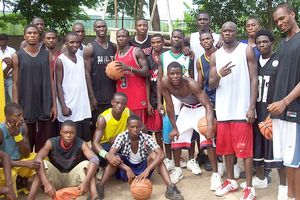 Courtesy of Davidson Sports InformationLovedale has a lot of new friends back home, thanks to his generosity.

As for life after graduation on May 17, the 23-year-old political science major spoke of numerous short-term aspirations, including playing professional basketball, interning with Samaritan's Feet and traveling to Florence to see the artwork he's learned about in his favorite class this semester, Renaissance Art.

Ultimately, he sees a larger purpose for himself -- one that he's already begun. "My long-term dream is to be able to give back to the society and help youth understand that even if the economic situation limits what you can do, it doesn't mean you should limit yourself," Lovedale said.

His mother has never been able to visit the U.S. to watch her son play, but his two eldest brothers attended Senior Night earlier this spring. As for his late father's wishes, Lovedale thinks the elder Lovedale might've changed his edict. "I think my dad would be very proud now, and Mom says all the time, 'I wish your dad was alive to see what you've turned into,'" Lovedale said. "I have a heart of giving … I feel at peace when I give."

This trip, when he returns to his first basketball court back home, Andrew Lovedale won't have to wait for his turn to play. Because the children, the teenagers, even the older players -- they'll be waiting for him.

Anna Katherine Clemmons is a reporter for ESPN The Magazine and a regular contributor to ESPN.com.

Anna Katherine Clemmons is a contributing writer for ESPN The Magazine.