By Dave Dameshek | Special to Page 2

Fine, Favre's a Viking. Vick's an Eagle. Michael Irvin's a Dancing Star. I get it. Now can we please just start talking about football? 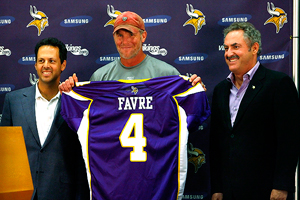 Scott A. Schneider/Getty ImagesDoes this photo give you stomach pains, too?

And when I say football, I mean the sport itself, not the never-ending, off-the-field soap operas surrounding the aforementioned players.

I want to talk about whether the Steelers can repeat. How Brady will do with his new knee and new offensive weapons. The NFC East. Stafford versus Sanchez. Matt Ryan. Reggie Bush. Fine, we can even discuss the Vikings, so long as we stick to what Favre can do to improve Minnesota's offense. You know, football.

While I'm at it, there are a lot of other things I don't need to ever hear again when it comes to sports: the obvious comments passed off as insight, the bogus clichés, the empty rhetoric and just-plain-lame wisecracks.

I don't need to hear that the only statistic that matters is the final score. If that's true, then please stop showing all those other statistics.

I don't need to hear that Antonio Gates and Tony Gonzalez played basketball in college.

That Michael Jordan was very competitive, even in practice!

And when we're watching golf, you don't need to tell us that a good shot is a good golf shot. That is, unless you're talking about John Daly at the 19th hole.

I don't need to hear that a team would have the top seed in the playoffs if the season ended today. Unless you have some inside information about a league's secret plans to call off the rest of the season, the point is moot.

And no more Gatorade baths for coaches. It's not original, it's not funny, and one of these days a high-strung septuagenarian coach is gonna drop dead from shock.

Sorry, The Wave's gone, too. If you want to persist with things that were cool in the '80s, put on your parachute pants and pop a Eurythmics tape in your boom box.

I don't ever need to hear again that Bob Knight once threw a chair on the floor.

I don't need to hear that Mark Madsen is a bad dancer. Hilarious!

I don't need to hear that Tom Brady was drafted in the sixth round.

Speaking of Mr. Bundchen, I'm tired of listening to sports radio blowhards engage in a heated debate over who's better, he or Peyton Manning. Can we just agree that it's a pretty tight race?

I don't need to hear that a particular football team is very physical. It's a sport that revolves around 300-pound men intentionally running into each other. Every team is physical. 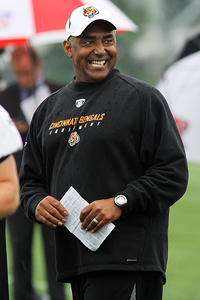 I don't need to hear that fans in industrial towns have a deep appreciation for blue-collar football. Sure, it's true, but what fans don't like seeing their team push the other team around? Are you suggesting people in San Diego or Miami can't stomach "smashmouth football"? And the opposite notion is just as silly. I'm fairly certain people in Cleveland and Detroit wouldn't be opposed to a more refined, high-flying ("white-collar"?) brand of football so long as it means their team is winning.

I don't need to hear that Mike Martz and Brian Billick are offensive geniuses, or that Marvin Lewis is a defensive genius. Not only have we heard it too many times, but their respective inabilities to exhibit that so-called genius over the past decade or so tell us none of it is true.

Sorry, College Football Player Who Just Scored A Touchdown -- when you get to the sideline, no more looking into the camera and extending your index finger to claim your team is No. 1 unless your team actually is No. 1. And by the way, would it kill you to say hi to Dad once in a while?

Before a playoff game, no more saying "This one's gonna come down to who wants it more." Since the two teams have already gone through the trouble of getting to said game, I'm guessing they'd both really like to win it.

And spare me the line about the players on the losing end of a playoff game having nothing to hang their heads about. Yes … yes, they do! After a year's worth of personal workouts, preseason training camp and a long regular season, they've made it all the way to the playoffs and lost. If they're not devastated, they're robots.

I don't need to hear NFL analysts say "National Football League" 37 times in a two-minute segment. "N-F-L" will suffice. Or are they just doing that to fill time because they have nothing better to say? Hmmm.

I don't need to hear that small-market teams in baseball can't win. Great point, except for the fact that the Twins, A's, Indians, Marlins and Brewers have been in the playoffs plenty in the past 15 seasons.

I never again need to hear about or see the time Steve Lyons dropped his pants during a game. If you thought that was hilarious and/or spontaneous, I've got a DVD of this guy named Carrot Top that I'd be happy to pass along.

While you're at it, save your breath about how NASCAR is just a bunch of guys turning left for 500 miles. That joke was already overused back when the only driver anyone had ever heard of was Richard Petty.

And speaking of NASCAR drivers, when you're in Victory Lane, please stop saying, "The car was running great today." Yeah, the fact that you just won gave me a pretty good idea that your car is superior to my '91 Geo Prism.

No more conversations about whether Team A won the game or Team B lost the game. I'm positive the correct answer is C: All of the above.

Staying with the alphabet, no more "D-Fence," either. (You know -- the cardboard "D" and fence facsimile that shows up in the stands at every football game?) Trust me, Grown Man Who Thought a Good Use of the Limited Time You Have on This Planet Would Be Making This at Home Before Heading Out to Show It Off to 75,000 Strangers: I'm doing this for your own good.

And can we stop with the nonsense about a team taking on the personality of its coach? I don't recall Steve Garvey, Fernando Valenzuela or any other player for Tommy Lasorda eating giant bowls of spaghetti and telling stories about Frank Sinatra.

I don't need to hear a losing coach in a postgame news conference say, "I won't make excuses," then proceed to make excuses for the next 10 minutes.

I don't need to hear from a team with a 3-0 series lead that the toughest game is the elimination game. You've pounded your opponent into submission, proved your superiority and broken their will. Yep, they've got you right where they want you. (Sorry, Yankees.)

By the way, that team facing elimination if it loses is the only team playing a must-win game. Stop referring to any other scenario as "must-win."

No more news conferences featuring prepared statements awkwardly read by athletes who feel legally obligated to apologize. All I've learned from the experience is that your publicist has zero ability to write in your voice.

I don't need to hear that Wes Welker is the most underrated player in the NFL. When you sing his praises during every game he plays, by definition he's no longer unsung. 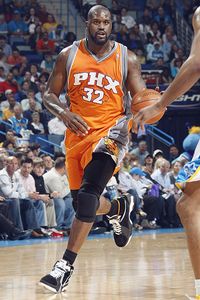 Layne Murdoch/NBAE/Getty ImagesShaq likes to show off his handle, but he's not a guard, and he doesn't look like one.

That Kobe Bryant can will his team to victory. If that's the case, then what gives, Kobe? Why haven't you willed the Lakers to 10 straight undefeated seasons? Forget about Randy Moss taking plays off; sounds like Kobe's taking entire games off.

That Shaquille O'Neal runs the floor like a guard. No, he doesn't. And he never did.

I don't need to hear that a potentially serious injury really puts things into perspective. Who lacked that perspective before the game? I'm guessing all of the players on both teams would take a loss if it meant no one would lose the ability to walk.

That the parents of Eric, Jordan and Marc Staal must have a tough time figuring out whom to root for when two of their sons' teams play. I'm sure the six-figure loans they can get from each of those kids help ease the emotional torment.

That being a pro athlete these days is a full-time, 12-month-a-year job.

That the players of yesteryear had jobs in the offseason.

That Ben Roethlisberger has a linebacker's mentality. I haven't seen him make a tackle since the '05 playoffs.

That Tim Duncan is fundamentally sound.

Speaking of Timmy's Spurs, stop talking about how they don't get much attention because of how boring they are. It leads me to believe that you've never actually watched Tony Parker and Manu Ginobili play.

I don't need to hear that L.A. sports fans are too busy surfing to care about their teams. I've lived in Southern California for a decade now, and the closest I've gotten to a surfboard was watching "Point Break." (So what if I've seen it 27 times? It doesn't invalidate my point.)

Going forward, stop referring to this season as being a freshman or rookie's "coming-out party." That no longer means what I think you think it means, Mr. Color Analyst in Your 60s.

I don't need to hear that when an over-the-hill athlete has some success (see: Tom Watson at the British Open), it allows every spectator in that athlete's age range to bask in the reflected glory. By that logic, I should start feeling good about myself when any player in his 30s has a good game. I don't. Matter of fact, when someone my age does something truly remarkable, it reminds me of my own failures.

I don't need to hear that "no one outside this locker room believed in us." About half the gamblers in Vegas believed in you. And what about the fans who paid to come down and cheer you on? Are they just masochists who expected you to break their hearts?

I could go on, but let's cut it off here. For all I know, Favre might be retiring again, and I wouldn't want you to miss it.