Welcome back to college football season! Hope you had a swell summer.

No need to stare. It really is me, the Heisman Trophy. Please, call me HT. 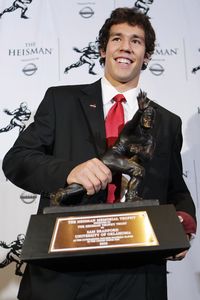 You're not walking away? Thanks, I appreciate it. Let's just say I've been getting the stiff-arm lately. Seems like I just don't have the same cache I once did.

It's been a tough couple of decades. I'm not sure what happened. I used to be the BMOC of all BMOCs. Everyone wanted a picture with me. All the biggest stars in college football wanted to hang out. Matter of fact, some of those players wanted to be me. Remember Desmond Howard?

If you and I met at the old Downtown Athletic Club in December, you were virtually guaranteed to be shaking hands with the NFL commissioner and pulling on a No. 1 jersey at the following spring's draft.

Back in the day, I was hangin' in Hollywood with The Juice. Tony Dorsett and I did Dallas. I was the life of the party hanging out with George Rogers and Tim Brown.

Thanks to me, players didn't have to drag around a stadium-sized entourage; I was a one-man posse. I was Paris Hilton, and every year's winner was my new BFF. Doors were flung open and velvet ropes were pulled aside when I was along for the ride. Bo knows. Herschel, Marcus and Barry, too.

The past few years, though, things sure have slowed down.

Could it be that people just don't dig trophies anymore? TV ratings suggest my peers Oscar and Emmy aren't as popular as they used to be, either. Nah, I'm deluding myself. People still love partying with the Stanley Cup. Did you see him a couple months ago? Seems like that dude's got a drink in him 24/7.

I certainly hope no one's blaming me for the whole BCS thing. Even a lunkhead like me knows that system makes no sense.

Maybe it's the helmet. Be honest: It makes me look like Amelia Earhart, right?

Whatever the reason, my days on the A-list are in the distant past -- right along with the wishbone, straight-on kickers and meaningful bowl games on New Year's Day.

I guess I could go and blame Gino Torretta or Danny Wuerffel. If those John Hughes movies taught me anything (I've been using my newfound free time to get caught up on DVDs), the company one keeps says everything about a person, and hangin' around with late-round draft picks hasn't exactly put me in the cool clique.

I won't point the finger at them, though. And not just 'cause I can't bend my bronze digits. There are plenty of other guys who deserve some of the blame.

No offense to Jason White -- he was a great college QB -- but serving as a doorstop at his shoe store ain't exactly the lifestyle to which I've become accustomed.

Eric Crouch? That cat was so underwhelmed by my company, he couldn't even decide if he wanted to keep playing football. He was like Brett Favre -- except for the lack of height, a strong arm and offers from NFL teams to start at QB.

At least Crouch didn't abandon the sport completely as did Charlie Ward, who ditched football in favor of the NBA. I don't want to seem paranoid, but that's got to be an indictment of me, right?

It hasn't been all bad. There were some high times with Rashaan Salaam and Ricky Williams, two fellas who really blazed a trail in recreational performance enhancement. (Don't judge me; glaucoma runs in the family.) On the downside for the players, the suspensions, short-term memory loss and gravitational pull to the couch are a bad formula for aspiring superstars.

Ron Dayne wasn't a bad guy, either. But how many all-you-can-eat buffets can you put out of business before it starts getting self-indulgent?

Reggie Bush, with all his flash and dash, reminded me of the good ol' days. But when he had a chance to come back to school and hang out for another year, he decided to go to the NFL instead. Sign of the times, or a slap in the face? Tomato, to-mah-to.

I thought Matt Leinart had potential, too. But as Arizona Cardinals fans can tell you, he's just a big phony. Yeah, there's still time for him to live up to being the 10th overall pick, but when he had that hot tub party last year, he didn't even invite his old pal HT. I'd rather be on "SportsCenter" than TMZ, but hey, beggars can't be choosers.

I guess it's what I deserve. At some point, a statue has to take a long look in the mirror and ask if it's his fault. During the past two decades, I haven't exactly been a good-luck charm for those aspiring to NFL stardom. Matter of fact, it might be time to acknowledge what so many of you are already whispering behind my back. The facts -- and lousy careers -- speak for themselves, starting with Andre Ware in 1989. Along with the busts and underachievers I've already mentioned, there has also been Ty Detmer, Chris Weinke and Troy Smith.

I guess it's worth mentioning that Eddie George is a borderline Hall of Famer, Charles Woodson is a five-time Pro Bowler and Carson Palmer's been good in spite of bad health and worse teammates. But that's just three guys, versus 17 others. I've been a PE major for, like, 7½ decades, but even I know those percentages aren't very good.

It's not that you have to be a great pro to make me look good (although it helps). The real issue is this: Too many of the best college-age players these days are already in the NFL. Yeah, the three-year waiting period helps, but seeing a guy who's projected to be a first-round pick come back for his senior year is still less likely than Washington State's having a winning season.

I don't blame them, you must understand. I'd go sign a million-dollar contract if I could, but by definition I'm a college kid for life. I just feel like I got left behind while everybody else went to a cooler party.

That's why this season is shaping up to be a big one for me. Three of the top candidates -- Tim Tebow, Sam Bradford and Colt McCoy -- are guys who already could've turned pro. And two of them, Tebow and Bradford, have a shot at a sequel with yours truly. It'd be like Murtaugh and Riggs in "Lethal Weapon 2," only better (no Joe Pesci character = addition by subtraction).

Just one week into the season, though, Bradford is already more or less out of the running with an injury. Did I mention that I've lost my mojo?

I'm not giving up, though. If Tebow wins, he'll probably go down as the greatest college football player ever. He'll be on the cover of every major sports magazine. Prime-time TV interviews. The works. Imagine the reflected glory in which I'd be able to bask!

I know, I know: He's gonna be a tight end in the NFL. Don't spoil the moment.

Then again, maybe McCoy will pull it out. That wouldn't be half-bad. Have you seen the coeds in Austin? Three words: Ooh. La. La.

Or maybe a relative sleeper like Joe McKnight will sneak in there and win the award. In spite of those recent letdowns with Leinart and Bush, I'm always down for a trip to Southern California.

And just like that, I'm suddenly feeling optimistic and excited for football season.

Now if you'll excuse me, I've gotta sit down. Standing like this is giving me major leg cramps.