As we prepare for the 25th draft conducted under the lottery system, consider how much the NBA has grown: from 23 to 30 teams; from seven lottery teams to 14; from rumors of frozen envelopes to a complicated system of ping-pong balls.

Consider also: in 1985, Ewing was a polished college senior who had led Georgetown to three NCAA championship games; one of the top picks this year will be 18-year-old Spanish point guard Ricky Rubio. 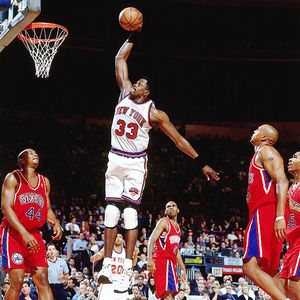 But NBA commissioner David Stern saw all this coming: "There are some 237 schools playing in Division I of the NCAA and that doesn't include smaller schools or foreign programs that will turn out more players like Uwe Blab or Bill Wennington," he told The Washington Post in 1985. "As basketball continues to grow worldwide, it will only get better."

OK, we'll forgive the Uwe Blab reference, but the commish was right. Basketball has grown as a global sport, turning the NBA draft into a worldwide event.

How did we get here? Contrary to the beliefs of conspiracy theorists, the lottery system was not created to steer Patrick Ewing to the Knicks, who had gone 24-58 in the 1984-85 season. In fact, the system was voted in after the 1983-84 season (in which the Knicks had won 47 games and reached the conference semifinals) in reaction to the perception that the Houston Rockets had tanked down the stretch. The Rockets lost 17 of their final 22 games, and nine of their final 10, to "pass" the San Diego Clippers by one game for the Western Conference's worst record. At the time, the worst teams in the West and East flipped a coin for the No. 1 overall pick. The Rockets won the toss, giving them the No. 1 selection for the second straight year (they added Hakeem Olajuwon to Ralph Sampson).

At the time, the controversy was whether a team on the fringe of making the playoffs would tank in order to make the lottery (originally, all lottery teams had an equal shot at the No. 1 pick). "If you're asking me where my heart would lie if it came down to a last-second shot between making the playoffs or the lottery, I couldn't -- I wouldn't -- tell you," Atlanta Hawks general manager Stan Kasten told the Post back then.

• Grading the drafts: Page 2 looks back each draft of the lottery era

• Woe is the Clippers: The sad, sordid history of 20 lottery picks

• Quiz: Do you know your draft history?

The Hawks missed the playoffs but didn't win the lottery. They drew the No. 5 pick and bypassed future All-Stars such as Karl Malone, Chris Mullin and Joe Dumars to draft the forgettable Jon Koncak (4.5 points per game in his career). The Clippers, predictably, didn't win the lottery either. Drafting third, they made a pick that would pretty much define the next two-plus decades of the franchise: Benoit Benjamin, a big man of immense talent, but best remembered for once trying to enter a game wearing two left shoes.

With that, let's relive each of the previous 24 years of the NBA draft under the lottery. We'll list the top 10 picks each year, suggest how teams should have drafted and grade the overall talent of each draft. Note that often players are selected by one team only to be dealt to another club in a prearranged trade; in those instances, we'll list the drafting team as the club that acquired the player.

Also, note this as you think about the results of Thursday's draft: By our hindsight accounting, NBA teams have nailed the top two selections in order just one time in 24 drafts (Shaquille O'Neal and Alonzo Mourning in 1992). They've nailed the top pick just seven times out of 24: David Robinson, Shaq, Chris Webber, Tim Duncan, LeBron James, Dwight Howard and Derrick Rose.

The first lottery proved to be one of the best, with three future members of the original Dream Team (Patrick Ewing, Chris Mullin, Karl Malone), quality All-Stars like Joe Dumars, championship role players like A.C. Green and Mario Elie, great durability (eight players with 1,000-plus career games) and the duo of Jon Koncak and Joe Kleine, the apparent inspiration for the movie "White Men Can't Jump." GRADE: A

Draft-day image: Do you believe in conspiracy theories?

Four of the top seven picks developed drug problems, the best player in the draft (Brad Daugherty) saw his career end at age 28 with back problems, and memorable flops like Kenny "Sky" Walker and Brad Sellers punctuated the list. The lone bright spot belonged to Cleveland, which picked three solid players in Daugherty, Ron Harper and Mark Price. GRADE: D-plus

Worst pick: Many to choose from.

Draft-day image: In retrospect, nothing to smile about what happened to William Bedford, Len Bias and Chris Washburn.

Any draft that produces three Hall of Famers has to rate high. An excellent draft for point guards, and the Bulls dynasty would be built with the additions of Scottie Pippen and Horace Grant. GRADE: A-minus

Draft-day image: How would things be different if this trade hadn't happened?

Danny Manning was the obvious No. 1 pick, but injuries curtailed his career. This draft produced some nice bench players in Brian Shaw and Steve Kerr but lacked star-level talent, and only Rod Strickland and Grant Long played 1,000 games. GRADE: C

The first two picks flopped, but the Lakers pulled out one of the all-time draft gems: Vlade Divac with the 26th pick. After seven solid seasons with the Lakers, he was flipped for a high school kid named Kobe Bryant. Did you know Dana Barros once made an All-Star team? GRADE: B-minus

Draft-day image: After smoking a cigarette, Vlade Divac shakes hands with the commish.

Seattle, which had missed the playoffs by only two games, lucked into the second pick and came away with Gary Payton, but the rest of the draft was pretty much a disaster. Even the good players -- like Derrick Coleman, Elden Campbell and Kendall Gill -- were perceived as underachievers. Four of the top 10 picks didn't play 500 games. One of the few All-Stars? Cedric Ceballos, one of the all-time great cherry-pickers. GRADE: D

Draft-day image: Hey, at least this draft gave us the greatest mullet in NBA history.

Only one player from this draft averaged 15 points per game in his career (Larry Johnson). Two of the best players -- Terrell Brandon and Steve Smith -- suffered injuries that hampered their careers. And Billy Owens sure looked like he had the total package. GRADE: C

The first two picks worked out. The rest of the draft? Not so much, although Christian Laettner was better than you realize, and Harold Miner had that awesome dunk contest. GRADE: B

Why did the NBA hit an excitement lull in the late '90s and early aughts? Because of lackluster drafts like this one. Chris Webber is a borderline Hall of Famer, and Penny Hardaway might have been one if not for injuries, leaving us to wonder if you'd rather have the good years of Vin Baker or Allan Houston. GRADE: C

Draft-day image: "No, Mr. Commissioner, you could never dunk on me!"

This seems like a list of guys who put up OK numbers for bad teams (Glenn Robinson with the Bucks, Jalen Rose with the bad Bulls teams, Wesley Person with the pre-LeBron Cavs). Heck, Eric Piatkowski is seventh in this draft for career games played. GRADE: D-plus

Draft-day image: Not a picture of Theo Ratliff's expiring contract.

Perhaps no team has pulled out more good players outside of the top-10 picks than the Lakers. In this draft, the Hornets drafted Kobe Bryant for L.A. with the 13th pick and traded him for Vlade Divac. The Lakers later added Arkansas Little-Rock guard Derek Fisher with the 24th pick. If you want to rank him ahead of Stephon Marbury, we won't argue. Oh, and a draft with four Hall of Famers rates a … GRADE: A

Draft-day image: Considering Samaki Walker's attire, maybe it's no surprise he averaged just 5.3 points per game in his career.

One of the weakest drafts ever, rescued only by Tim Duncan's titles, Tracy McGrady's scoring titles and Scot Pollard's hair. GRADE: C

A draft with star talent at the top and excellent depth (17 players with career scoring averages in double digits). Of course, some of those double-digit scorers were one-dimensional gunners like Larry Hughes, Ricky Davis and Bonzi Wells. GRADE: B-plus

Draft-day image: "I love Dallas already! They would never trade me for that funny-looking German dude!"

A draft deep with solid All-Star-caliber players. Meanwhile, the Knicks still await the debut of first-rounder Frederic Weis. GRADE: B

Close your eyes. A draft amusing for its badness. A draft that has produced only three All-Star seasons: one apiece from Michael Redd, Kenyon Martin and Jamaal Magloire (no, that's not a typo). A draft so bad we almost put Marko Jaric in the top 10 just for marrying supermodel Adriana Lima. GRADE: F

Draft-day image: The Clippers picked the wrong draft to have three of the top 18 picks.

The top 10 had more busts than an episode of "The Real Housewives of New Jersey," but there were some good finds later in the draft. GRADE: C-plus

Draft-day image: "Hawks? Grizzlies? To be honest, I wouldn't mind playing for the Lakers."

Draft-day image: "Yes, this is a basketball. I will prove to be very skilled at putting it in the basket."

No denying the greatness of the top four, and the depth that includes guys like Mickael Pietrus, Boris Diaw and Kyle Korver, but it seems like it will fall a bit short of the immortal 1984 draft (Jordan, Olajuwon, Barkley, Stockton, Alvin Robertson, Kevin Willis, Otis Thorpe, Sam Perkins, Jerome Kersey and Michael Cage's Jheri curl). GRADE: A

Draft-day image: Could anyone else have pulled this off?

The Magic took the right guy in high schooler Dwight Howard, Luke Jackson proved to be one of the all-time top-10 busts, and if Robert Swift ever develops this grade will go up. GRADE: B-minus

Draft-day image: "I plan on having a long career with the Hawks!"

A solid draft featuring point guards Chris Paul and Deron Williams, and four North Carolina players taken in the top 14 picks. How did Danny Granger fall all the way to the 17th pick? GRADE: C-plus

Draft-day image: "Yes, I am very excited to leave Russia to play for the Clippers."

Uninspiring, highlighted by top-five flop Adam Morrison, but kudos to the Jazz for getting Ronnie Brewer with the 14th pick and Paul Millsap with the 47th pick. GRADE: C-minus

Draft-day image: "Adam, I see a championship ring in your future."

The early returns indicate a draft short of future All-Stars aside from Kevin Durant, but fairly deep in solid contributors (players outside the top 10 include Rodney Stuckey, Wilson Chandler, Rudy Fernandez and Carl Landry). GRADE: C-plus

Derrick Rose led a terrific rookie season for this class, with O.J. Mayo, Eric Gordon and Michael Beasley showing the potential to develop into big-time scorers. GRADE: B

Worst pick: Hey, we're not ready to write off Danilo Gallinari just yet. Check back in a few years.

Draft-day image: The beginning of the Robin Lopez era in the NBA did not disappoint.

In the lead-up to the NBA draft on June 25, Insider digs deep with the D.R.A.F.T. Initiative. Make sure to check out our hubs for pick-based and team-based analysis, as well as the methodology behind our research.