My regular Tuesday Morning Quarterback column doesn't return until August, but here's some bonus TMQ-like substance to tide you over.

The Fox series "24" concluded Monday night, and not a moment too soon. It had become so preposterous; it was more like science fiction than drama. Through the course of the eight-year series, the United States had five presidents, and the fifth was about to announce her resignation as the series ended. Through the eight years depicted, a nuclear bomb went off near Los Angeles, a former president was murdered by the CIA, Air Force One was shot down, martial law was declared, U.S. nuclear missile launch codes were stolen, Russian nuclear missile launch codes were stolen, the Secretary of Defense was kidnapped and government computers were taken over. Jack Bauer solved all these problems (except the Los Angeles explosion) single-handedly, always by running from place to place, shouting at everyone he met, then shooting people using one of those special guns that never runs out of bullets, while thousands of rounds fired back at him at close range missed their target. Bauer also single-handedly foiled a nerve gas attack on diplomats, a radioactive dirty-bomb attack on New York, five other nuclear bomb attacks on U.S. cities, and an attempt to cause several U.S. nuclear power plants to melt down. This veered well beyond nonsense, even given Jack's amazing ability to move across town -- or across country -- during commercials. Another sci-fi aspect: The countless conspirators of "24" endlessly discuss their conspiracies, in specific language, over cell phones!

Here is my favorite sci-fi line from the series: "The president has ordered the media not to report any criticism." And how did that work for you, George W. Bush?

In the final two episodes, Jack killed a dozen people, including five Russian bodyguards standing in a hotel room, all of whom died instantaneously on the first shot, without any of them ever getting a shot off at him. Clint Eastwood can only envy that scene. Plus, lots of gunshots were fired in a fancy hotel and no policemen came. Also, Jack rescued a woman from a CIA-defended cell, then attacked an ex-president's motorcade and kidnapped him in central Manhattan without anyone noticing. At one point, Jack is running down a Manhattan street holding only his never-empty pistol, then a scene later has a large backpack with sniper weapons and electronics. Where did the large backpack come from? Through the course of the series, Jack killed, with guns or knives, perhaps 1,000 people. I doubt there has ever been a human being who killed that many people in any form of face-to-face encounters, including during war; certainly there has never been a law enforcement officer who's killed more than a few people. (Most law enforcement officers retire without ever having fired their guns except on the training range, let alone killing anyone.) 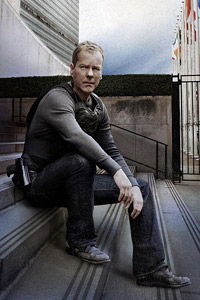 FOX/Brian Bowen Smith TMQ suspects Jack Bauer might have killed 1,000 people during eight seasons of "24." No NFL receiver caught 1,000 passes during that span. Think about that.

And yes it's television, which means absurdity. But the big buildup to the final scene of the series turned on whether the president would sign a treaty with fictional Kamistan -- a treaty that Bauer alone knew to be a Russian plot. As the series' climatic scene begins, the setup is that if the president signs, the United States will be sold out to the Russians. The U.N. Secretary General pronounces, "By signing, you commit your respective countries to abide by the terms therein." Signing any treaty is a symbolic gesture! In the United States, treaties only acquire force once ratified by the Senate. I admit I don't know how these things are handled in Kamistan. Come on, Hollywood. Isn't there anyone on the scriptwriting staff with a passing knowledge of the U.S. Constitution?

This leads to the disturbing thing about "24" -- not its blood, but its distorted depictions of how U.S. government works. Not only did the show present warped pictures of the constitution, the military and the legal system, it went beyond to the most negative, cynical view of the United States ever seen on television. Throughout the series, hardly anyone is honest or patriotic -- most high White House officials, and practically everyone in the military and in national intelligence, is either corrupt or a traitor or both. The CIA, especially, is depicted as employing traitors exclusively -- like a hiring requirement. In the series' penultimate scene, as the valorous Chloe finally regains control of the fictional super-secret CTU, she orders everyone but Ortez and Arlo out of headquarters -- because everyone else in the CTU is a traitor.

If I were a U.S. military officer or intelligence official, I would be offended by "24" and its depiction of the United States government and national security apparatus as dens of lawbreakers and turncoats. What a relief it's over.

In addition to writing Tuesday Morning Quarterback for Page 2, Gregg Easterbrook is the author of the new book "Sonic Boom," and six other books. He is also a contributing editor for The New Republic, The Atlantic Monthly and The Washington Monthly. His Web site can be found here.