Breaking down the Bills' QB situation 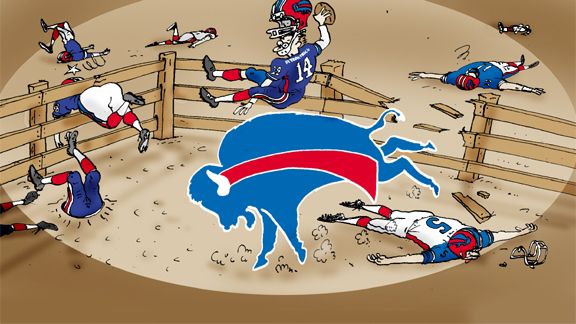 With his team at a now-familiar 0-2 and ranked dead last in passing yards, on Monday Bills coach Chan Gailey -- following a time-honored tradition in Buffalo that dates back to 1997 -- yanked his starting quarterback Trent Edwards in favor of Ryan Fitzpatrick, the 250th player taken in the 2005 draft, marking the fifth in-season QB change for the Bills in the past six seasons.

The team, Gailey said, needed the kind of "spark" only a former seventh-round draft pick out of football powerhouse Harvard could give them. Even though many moons ago in Buffalo a wise old sage named Marv Levy once said, "Changing quarterbacks is always a moot question, it often doesn't help much."

Of course, Levy said this in 1997, right after he, um, changed quarterbacks. That's just the nonsensical way things have gone in Buffalo since Hall of Fame quarterback Jim Kelly retired. From the knuckleheaded Billy Joe Hobert forgetting to read his playbook to Flutie Flakes to future UFL star J.P. Losman, the Bills have gone through, by my count, 11 quarterbacks and 10 seasons without a playoff appearance.

Fret not, Flem Filers, for I can sum up the Buffalo Bills quarterback situation in one simple sentence …

Editor's note: Looking for Flem's top five, his music riffs and weekly reader e-mail WHYLO (who helped you log on?) awards? Check 'em out on Facebook and Twitter at @daveflemingespn.

David Fleming is a senior writer for ESPN The Magazine and columnist for ESPN.com. While covering the NFL for the past 16 years at Sports Illustrated and ESPN he has written more than 30 cover stories, two books, ("Noah's Rainbow" and "Breaker Boys") and his work has been anthologized in The Best American Sports Writing.