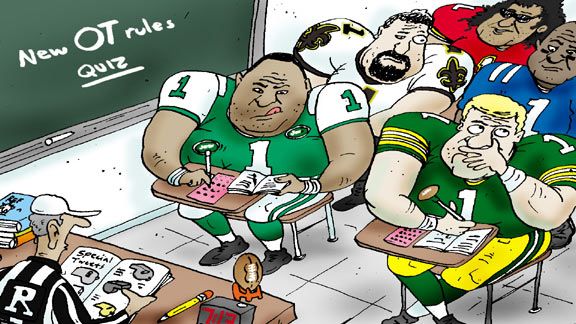 Kurt Snibbe/ESPN.comIf it's all tied up at 60 minutes, that's when the playoff fun begins.

It took the NFL eight years to come up with its new OT rule.

Yes, the basic tenets are simple: A team cannot win in overtime on a first-possession field goal; now, the game is extended if that happens. If both teams kick field goals on their first possessions, the next team to score wins; if one team kicks a field goal and the other team doesn't on its first possession, the game's over; and a touchdown at any time wins the game -- period.

But what about safeties? And interceptions? Or onside kicks? I get the idea of dual possession (and think it's brilliant and long overdue, especially after last year's NFC Championship Game), but does a fumbled kick return constitute a "possession"? What about a blocked field goal? What happens if, say, at the end of the first 15-minute OT period, a team still hasn't finished its first possession? Then what? And theoretically, if no one ever scores, the Saints-Seahawks game could go on, like, forever, right?

With so many questions and so little time before the rule actually goes into effect Saturday in the wild-card round of the playoffs, as a public service the Flem File has come up with every possible overtime scenario and calculated the outcome using the new OT rule.

Scenario 1: New England wins the toss and gets the ball first in OT in the AFC Championship Game against the Colts (assuming an Indy win in the wild-card round). A touchback puts the ball at the 20. QB Tom Brady audibles to a run play at the line of scrimmage, then hands the ball to Danny Woodhead, who runs right off center Dan Koppen's right hip and 80 yards for a TD. Pats win.

Scenario 2: The Falcons kick a 38-yard field goal on the opening possession of OT in the NFC title game. With a trip to the Super Bowl on the line, the Bears' Devin Hester takes the kickoff 98 yards and is about to reach the end zone when he loses control of the ball and the Falcons recover it. Falcons win.

Scenario 3: In OT in the NFC Championship Game, the Packers go three-and-out, then the Bears go three-and-out. On first down of Green Bay's next possession, QB Aaron Rodgers chucks the ball downfield to Donald Driver, who draws a pass-interference flag, moving the ball to the 15. The Packers kick a 33-yard field goal. Packers win.

Scenario 4: On the opening possession of OT in the divisional round, the Jets drive to the Patriots' 35-yard line. Coach Rex Ryan fakes the field goal and pooch-kicks it to the 3-yard line. On the Patriots' first play from scrimmage, the Jets send every available body on a blitz. The A-gap gives way like it was Super Bowl XLII, and Tom Brady tucks the ball and makes a run for it but is brought down in the end zone, by his hair, for a Jets safety. Jets win.

Scenario 5: The Eagles kick a field goal, then give up a touchdown to the Falcons to lose the NFC title game in OT. And afterward, Eagles fans whine, like Matt Cooke on HBO's "24/7" on Wednesday night, that the rule never should have been changed in the first place. Because, they say, in the record 19 overtime games in the 2010 regular season, only two were decided by field goals on the opening drive. That's a neat, but incomplete, stat you're going to see, hear and read a lot in the next few weeks. But it is meaningless compared with the 16 years of data and debate the NFL used to determine that its best games were being decided by chance far too often. What's more, the rule was changed because the NFL decided -- correctly -- that, even at 1-in-10, the odds of a Super Bowl's being decided by a coin toss was an unacceptable risk. And I agree. Falcons win.

Scenario 6: In the NFC wild-card round, Seattle kicks a field goal on the opening drive of OT. The Saints get the ball at the 19, but their drive stalls before reaching midfield. On fourth-and-8, crowd noise prevents Marques Colston from picking up an audible by Drew Brees. He cuts inside instead of outside, and the pass from Brees skips harmlessly across the frozen turf. It's a strange, underwhelming way to win a game, on an incomplete pass. Doesn't matter. Seattle wins.

Scenario 7: Lambeau Field is rocking as the Packers kick to the Seahawks to start OT in the NFC Championship Game. (Qwest Field had a scheduling conflict and is hosting the circus.) Leon Washington bats down the squib kick at the 24 and goes, untouched, 76 yards to the end zone. Silence. Seahawks win.

Scenario 8: The Bengals take the opening kickoff and … wait … no … sorry. There's no point to this one, really, not after watching the most horrific thing I've seen all season: Tuesday's news conference with borderline delusional owner Mike Brown sitting next to Marvin Lewis after he had just, basically, sold his soul by agreeing to return to the team. (Granted, Panthers owner Jerry Richardson didn't come off looking much better in his presser.) Lewis, you'll remember, had sworn he would bolt if serious upgrades were not made to, among other things, the Bengals' woeful mom-'n'-pop scouting department. "I think we do all right," Brown responded. According to The Cincinnati Enquirer, Brown has lost 200 games faster than any other owner in NFL history and is 25 games under .500 in the past 10 years. Look, that's not "all right." That's pathetic and sickening and enough evidence, I think, that the league should consider stepping in and finally doing something, anything. Bengals lose … again.

Scenario 9: A blitzing James Harrison tips a pass from Peyton Manning on the Colts' first possession of OT in an AFC divisional matchup. Troy Polamalu dives, catches the ball, rolls, gets up and returns it 46 yards for a touchdown. Steelers win.

Scenario 10: The Pats win the OT coin toss, take the ball and kick a field goal against the Chiefs to take the lead in the AFC Championship Game. Bill Belichick then calls for an onside kick. Dan Connolly recovers. Believing they are guaranteed a set of downs on offense by the new "dual possession" OT rule, the Chiefs are pointing at Belichick and laughing their heads off on the sideline. The rule states, however, that each team is guaranteed only an "opportunity to possess the ball." The Chiefs had their chance. Pats win.

Scenario 11: The Ravens get the ball first in OT, but their offense stalls against the Chiefs. They punt, but the Chiefs fumble the ball back to them on the 8-yard line. On the next play, Baltimore kicks a field goal. Ravens win.

Scenario 12: In the Super Bowl, the Bears kick a field goal on the first drive of OT. The Chiefs get the ball and move downfield, slowly and methodically, on a drive that takes more than 11 minutes. Bears fans are counting down the final seconds on the clock believing that they win if they're ahead at the end of the extra 15 minutes. The clock hits 0:00 and a guy with no shirt on wearing a Ditka mask runs on the field and does the Dougie at the 50. It's really good; he even pretends to flick his shirt, even though he isn't wearing one, but security still carries him off the field. During the ruckus, the timekeeper correctly resets the clock to 15:00. The Bears are confused and deflated, and Jamaal Charles goes off tackle for a 12-yard TD. Chiefs win.

Scenario 13: The Ravens kick a field goal, and the Pats scratch and claw and make it to the 40 on their drive. With no choice on fourth down, they attempt a 58-yard field goal to extend the game. The ball floats for what seems like forever in the frigid New England night sky but flutters just outside the right upright. The AFC Championship Game is over. Ravens win.

Scenario 14: The Eagles kick a field goal in OT against the Falcons in the NFC title game. QB Matt Ryan then gets the ball and marches the Falcons downfield to the 10-yard line. Instead of ending the game on a touchdown, Atlanta decides to play it safe and kick the chip shot to trigger sudden death. But Philly blocks the kick. Eagles win.

Scenario 15: Winds gust to 40 mph through the open end zone of Heinz Field for the AFC divisional playoffs. After trading overtime field goals, the Ravens and Steelers go 30 minutes without another score. Because the Steelers won the original coin toss in period three, the choice now belongs to the Ravens, who send shock waves through the press box when they defer. The Steelers, of course, take the ball. The Ravens take the wind. They hold Pittsburgh, then drive to midfield and kick a 64-yard field goal. Baltimore wins.

Scenario 16: The Packers kick a short field goal on the first OT possession in the Super Bowl. The Jets get the ball and drive right down to the 10. Rex Ryan goes for the win instead of the field goal, and, on fourth down, the refs say Braylon Edwards caught the ball in the end zone but did not cleanly possess it all the way through to the ground. Ryan throws his red flag. (He keeps it in his shoe for some weird reason.) But there are no coach's replay challenges in OT and, despite compelling video to the contrary, after making 800 million people wait 13 excruciating minutes, the replay assistant decides there is not enough evidence to overturn the call on the field. Packers win.

Scenario 17: Trying to win the AFC Championship Game on the second possession of overtime, the Steelers attempt a 55-yard field goal that falls short. While the Pittsburgh players fall to the ground in agony and disbelief, Kansas City's Javier Arenas picks up the ball and returns it 104 yards for a touchdown. Chiefs win.

Scenario 18: The Seahawks kick a field goal to open OT in the NFC Championship Game, and when Chicago gets the ball back on first down, Jay Cutler fumbles the snap and the Seahawks recover. Seahawks win.

Scenario 19: As OT starts in Philadelphia in the NFC Championship Game, Aaron Rodgers and Mike Vick have been knocked out of the game with injuries. With both teams unable to move the ball with their backup QBs, the score remains 0-0 after the first 15 minutes of extra time. After the second OT, it's still 0-0. Three, four, five, six, seven extra periods expire with no score. With eight under their belts, the two teams have played the equivalent of three full football games. For a few series, the Packers line up with just nine players on defense. Starving, Andy Reid orders a pizza (Hawaiian-style with extra anchovies and dusted with Oreo crumbs) delivered to the Eagles bench. The game started at 4:30 p.m. It's past midnight. The OT has gone on so long that Vick has actually had enough time to heal. At 2:30 a.m., he scrambles 43 yards for a touchdown but must wake up the ref, who is napping under the field goal, to get him to signal the score. Eagles win.

With only 17 healthy players left, the Eagles are forced to forfeit the Super Bowl.

But commissioner Roger Goodell says he is optimistic the new OT rule is working perfectly.

Editor's note: Looking for Flem's top five, his music riffs and weekly reader e-mail WHYLO (who helped you log on?) awards? Check 'em out on Facebook and on Twitter at @daveflemingespn.