Arrrgh! you ready for some Pirate facts?

It is now accepted as fact that the Pittsburgh Pirates are the most pathetic franchise in professional sports. The Nate McLouth trade confirmed it, no?

Sixteen consecutive losing seasons. This year would make 17 -- an all-time record in professional sports. Even the Lions and Clippers aren't that bad.

In a city that boasts the reigning Super Bowl champion and a hockey team that has made consecutive trips to the Stanley Cup finals, you'd think that Pirates management would be able to learn how to build a winner by example. Yet they are hopeless. It's a fact.

Well, you have your facts and I have mine.

Now we see what 16 consecutive losing seasons can do to a fan base. In a city where half the population would consider letting the waters of the confluence consume them if the Steelers finished the season 8-8 or 9-7 ... in a city where they expect a hockey team led by a 21- and 22-year-old to win the Stanley Cup ... when it comes to baseball, all many fans dream of is mediocrity. 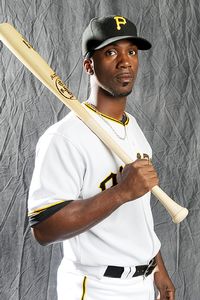 Rob Tringali/Getty ImagesWe can build on this! Oh, by this we mean Andrew McCutchen.

It's pathetic. Rooting for .500 is pathetic. Yes, nearly two decades of horrible management decisions pushed many Pirates fans to this. But have some dignity, people. Please. A .500 record is just losing with a pretty bow on it. It's just 62-100 without the high draft picks.

He's just not. Pirates fans, after all the bad baseball you have been subjected to, I'm afraid your ability to properly evaluate talent can't really be trusted. Sorry.

A poor kid may think his yo-yo is the greatest toy ever made. But a rich kid's PlayStation 3 is still better.

Nate McLouth is a nice major league player. Great baserunner, good glove, and he's got some pop. He is a good outfielder on a mediocre team. On a championship-caliber team? He's a third outfielder. Maybe even a fourth outfielder. Notice that no one is touting the Braves as World Series favorites now. Or even NL East favorites. Career .261 hitters tend not to shift the balance of power in baseball.

Fact #3: The Pirates would not be good if they had kept their "core" in place.

Please. You're embarrassing yourselves.

Fact #4: The Pirates' front office actually knows what it's doing.

No. Really. And trust me, that was a hard sentence for me to write. The Microsoft Word paper-clip guy even popped up and said, "You appear to be talking crazy. Need me to contact the psychiatric hospital?"

But they do. Or, at the very least, they have a legitimate plan that they're sticking to. The past regimes of Cam Bonifay and Dave Littlefield would bounce back and forth between youth movements and signing undesired veterans to above-market contracts in hopes the magical land of .500 would be reached so they could keep their jobs.

New team president Frank Coonelly and general manager Neal Huntington have been on the job for a season and a half. They are not to blame for all that came before them. They inherited a franchise with little talent at the major league level and almost none in the minors. Not a strong hand to play. And an impossible hand to make a quick turnaround with. President Obama thinks he stepped into a bad situation. I'd take two wars and the worst economy since the Great Depression over a starting rotation that included Matt Morris and Ian Snell.

Fact #5: There is legitimate reason for hope in the very near future.

(Leave me alone, paper clip!) I realize Pirates fans have heard that before. I recall there was supposed to be a "championship contender" in place for the opening of PNC Park. PNC Park opened in 2001. That team went 62-100. The best team to play in the stadium (so far) went 75-87. The stadium has been open nine @$^*# years and the best team to play there was 75-87? My God. (Where's that paper clip. I want to unbend it and stab myself in the eye.)

But the current management is trying to do it the right way. They are breaking the team down. Completely. And then they're going to build it back up. Gone are the days of partial demolishments abandoned halfway through and patched together with some leftovers pulled off a trailer home.

In the Nady trade, the Pirates got 40 percent of their current starting rotation and a possible future star in Jose Tabata. (Yes, he has a 43-year-old wife who is an alleged baby-stealer. These are still the Pirates.) That trade was a clear win for Pittsburgh.

In the Bay trade, the Pirates got their current starting third baseman and several other prospects with high ceilings. That trade was a win for both sides.

In the McLouth trade, they got three highly regarded minor leaguers and cleared the way for potential superstar center fielder Andrew McCutchen, who went 2-for-4 with 3 runs, an RBI, a walk and a stolen base Thursday in his major league debut.

Just a couple more years of patience, Pirates fans. Trust me on this. It will be worth it.

Now, if you'll excuse me, some people in white coats are knocking on my door.