Looking up to the Pirates, for a change

I am a Pirates fan.

I say that not as a shameful admission. I say it with pride. 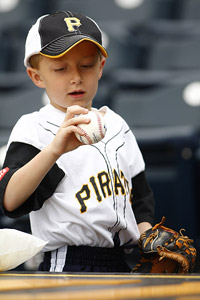 While fans of other teams -- successful teams -- have had to watch their star players be linked to performance-enhancing drugs, had to see their championships tainted, the Pirates have coasted through the past two decades, unscathed. Clean. Honorable.

One day my own son will no doubt ask me why we root for the Pirates. And I'll be proud to tell him why.

DJ Gallo, Jr. The VIIth: Dad, why do we root for the Pirates?

Me: Well, because our family has Pittsburgh roots and we have always rooted for the Pirates.

DJGJr7: I know. But the Pirates are terrible. They are an embarrassment to the city. Why should we root for them? If the Pittsburgh symphony stinks, we don't go see it just because it's from Pittsburgh. We'd go elsewhere to listen to a better symphony, right? [Note: My son will be well-rounded and interested in both sports and the arts.]

You know these "terrible" Pirates you talk about? These "embarrassments" to the city? I'll have you know they are some of the most honorable men ever. That's right: ever. They did things the right way and passed up championship rings and millions of dollars in the process. They should be commended, not mocked. Beloved, not ridiculed.

Let me explain. Do you know when the steroids era started?

DJGJr7: I don't know. When did baseball start getting exciting?

Me: Don't be a smart-ass, son. No, I say baseball's steroids era truly began in 1993 -- the year Lenny Dykstra and his 30 pounds of mysterious extra muscle showed up at spring training and helped the Phillies to the World Series. Do you know what hasn't happened since 1992?

Me: Good guess. But wrong again, son. Lenny Dykstra's brain never functioned properly. What I am stressing is that the Pirates haven't had a winning season since 1992. Doesn't that seem like an odd coincidence?

DJGJr7: Maybe. It could just be that … 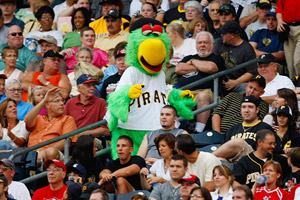 Scott Boehm/Getty ImagesThat parrot might be the only Pirate on performance-enhancing drugs.

Me: So you agree with me. The Pirates won three consecutive division titles from 1990 to 1992. Then, steroids exploded in Major League Baseball and the Pirates haven't won again. They could have embraced steroids like the Red Sox and Yankees and won some titles. They could have dabbled in steroids like all the other teams and won some games. But they were better than that. Not out on the field, of course. Out on the field they were far, far worse. But inside they were better than that. Inside. In their heart. That's where it matters. And that's why we should support the Pirates.

DJGJr7: But I thought there were some Pirates in the Mitchell Report?

Me: No one is perfect, son. Even a perfect game has balls.

Me: Grow up, son. Now, for the record, the only two Pirates who the Mitchell Report suggested used performance enhancers while on the Pirates were Kevin Young and Tim Laker. That's nothing compared to the number of players the rest of baseball has had linked to steroids. And the fans of Pittsburgh rejected Young and Laker for it. You want proof? Look around. You won't see one Kevin Young or Tim Laker poster up on any bedroom wall in western Pennsylvania.

DJGJr7: Nor would you have before they were in the Mitchell Report. Because they were both terrible. But if there is such a thing as a Tim Laker poster, I'd put it up. You know, in sort of an ironic way.

Me: You are missing the point, hipster scum. The Pirates, by and large, and unlike every other team in baseball, did not use steroids. You want more proof? In 1998, when Mark McGwire and Sammy Sosa were bashing 70 and 66 home runs respectively, the Pirates had only 69 wins. Kevin Young led the team with 27 home runs. Jose Guillen was second with 14. Al Martin was third with 12. Twelve home runs as a starting corner outfielder in 1998! That's what the media should have been publicizing, not those cheaters McGwire and Sosa.

DJGJr7: Al Martin? Not a cheater? The guy who had two wives?

DJGJr7: What does that prove?

Me: It proves -- again -- that the Pirates weren't on steroids. They were better than that. They watched while a former Pirate, whom everyone suspected of cheating, hit 73 home runs. Just think how good the Pirates could have been these last two decades had they embraced steroids like every other team. But they were awful. And that's great. 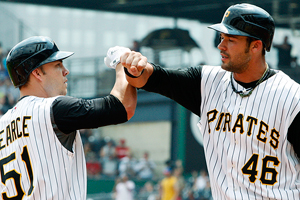 DJGJr7: But Barry Bonds was a superstar when he played for the Pirates pre-steroids.

DJGJr7: While Kevin Young never hit more than 27 home runs, and the rest of the Pirates, the clean ones, usually hit far less.

DJGJr7: So isn't it more that the Pirates have just had terrible players for the entire steroids era, not that they could have been good if everyone else didn't cheat? And that management was just too cheap to pay for productive players, whether the players were on steroids or not? I mean, even Kevin Young on steroids was lousy. The Pirates on steroids would have just meant higher pop-ups. I don't see what's so honorable about that. I wish a few more of them had cared enough to take steroids.

Me: You make me sad, son. You have ruined the steroids era for me.

DJGJr7: Sorry. Can I put the Yankees' game back on now?