The sports world without the Internet?

On Sept. 2, 1969, two computers at UCLA exchanged meaningless data in a test of something called ARPANET, an experimental military network. Al Gore, serving as an Army journalist at the time, couldn't have been prouder. The Internet was born! 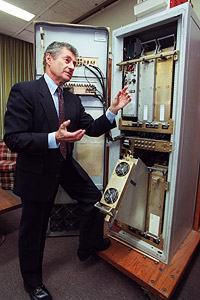 AP Photo/Reed SaxonThat refrigerator-sized computer made the first-ever connection to the Internet. Thankfully, computers have slimmed down.

So Wednesday marks the 40th birthday of the Internet. To put it bluntly, the Internet has changed the sports fan experience more than probably any other aspect of life. (Not true, but I write for a sports Web site.)

Here are 40 examples of how your sports fandom would be different today without the Internet.

• Wondering how tall Player X is, or where he was born? You wouldn't be able to Google him to find out. Better hope you have his baseball card somewhere in your closet.

• When you're at a game, you wouldn't be able to check your work e-mail on your phone.

• When you're at work, you wouldn't be able to check the score of a game on your phone.

• No more texting a message to the scoreboard. No way to tell the world that the "Yanks R Gr8!"

• If you told someone "you set it to vibrate," you'd probably be thrown out of most reputable establishments.

• The box score page of the sports section would be valuable again. Better find another section of the paper to wrap fish in. The stocks page maybe?

• You would have no way to know exactly what @OGOchoCinco is doing right NOW. And NOW. And NOW again. And NOW.

• We wouldn't be able to watch this over and over again.

• All of your favorite blogs? Gone. Same with your lifelong friendship with commenter BigPillPapi.

• With no Internet message boards, one of the few outlets you'd have to prove your superior reasoning skills would be as an attorney. And law school is expensive. So that leaves yelling random things out on street corners. Not a terrible option, really. 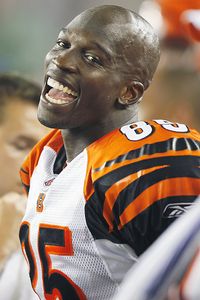 AP Photo/Michael DwyerWhat would Mr. Ochocinco do without Twitter? Perish the thought!

• Ohmigod! There would be no way for us to know that, right this very second, @OGOchoCinco is about to watch some movies!

• No more recruiting Web sites. Good luck finding another (legal) place where you can gush over the "build" of a teenage boy. Actually, I hope you wouldn't try to find such a place.

• Giving something the LOLcats treatment would be confined to doodling up the newspaper or destroying art.

• There'd be no way to download the annual Brett Favre update to your "Madden" video game.

• Do you imagine that your favorite player is actually a great guy and pretty smart? No, sir! You have the Internet now. So you know far more about him than you really want to.

• No more e-mailing or texting a friend to tell him his team sucks. And don't bother writing a letter. They may win by the time it gets there.

• Ogling cheerleaders out in public? Ugh. Creepy. Googling pictures of cheerleaders at home? A completely normal activity for any red-blooded American male!

• Without the free-flowing structure of the Internet, you'd never have known what kind of coffee your favorite sportswriter likes, or how he likes to travel. THAT IS NO WAY TO LIVE!

• ROTFL, LOL and the like? Would be meaningless gibberish written by morons. So, same as now. LOL! JK!

• No Internet means no eBay. And no eBay means you would actually have to meet people face to face and explain why, as a grown man, you want to buy that Ken Griffey Jr. bobblehead.

• No Internet means no ticket-broker sites, too. You'd have to buy directly from a scalper. It's so much more humiliating to get robbed out on the street in public, rather than in the comfort of your own home.

• Sports bloggers, not newspaper writers, would be unemployed and living in their parents' basements.

• Want to instantly find out the distance to the hole from where you hit your ball into the rough? Not without the Net.

• Things wouldn't go viral. Unless they were actually viruses. Possibly even spread by promiscuous athletes.

• Without the Internet, I wouldn't be panicked right now because I haven't receive a Twitter update from @OGOchoCinco in four minutes! Should I call 911?!

• Power rankings did not exist before the Internet. So what would be my source for getting enraged over a completely arbitrary and meaningless rankings system? I DEMAND TO KNOW! NOW! 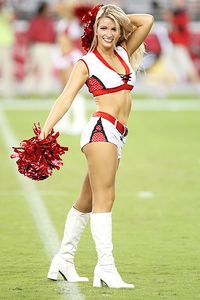 Christian Petersen/Getty ImagesWe're proud to bring you this Internet image of an Arizona Cardinals cheerleader.

• No Internet means no Wikipedia. How else would I have once learned that Rich Rodriguez majored in "Traitor" at West Virginia?

• Without URLs like FireCoachX.com, fans wouldn't be able to express their desire to fire their team's new coach after his first loss.

• No Stephon Marbury on Ustream. (The Internet isn't all good, of course. This item doesn't count.)

• No SportsNation polls. I would be completely unaware that almost no one in Mississippi and Alaska shares the same opinion I do on anything.

• You wouldn't be able to be Facebook friends with your favorite athlete. "Hey, what do you mean you don't know my name and I can't have an autograph? We're pals!"

• The Internet allows things to move from breaking news to sooooo played out in about three hours. I mean, I can't believe people are still talking about this morning's U.S. Open matches. Squares.

• Without the Internet, it's hard to find and join obscure fan clubs full of people with similar interests you never could have imagined even existed before. For example, an Atlanta Thrashers fan club.

• We would have no hope of possibly destroying the BCS computer via a DNOS attack or some sort of computer virus. (Please! Someone get on this!)

• Whew! Without the Internet, I wouldn't know that @OGOchoCinco is OK. There has been a new update. He's doing some shopping.