Philadelphians can read the phine print

A teenage Phillies fan was Tasered on Monday night after he ran onto the field during a game. This comes just a few weeks after an intoxicated Phillies fan vomited on an 11-year-old girl.

As we all know, these incidents are far from the first such displays by Philadelphia fans. We've come to the point that you almost expect something like this to happen if you go to a sporting event in Philadelphia.

• Aug. 21, 1949: Phillies fans shower the field with glass bottles in protest of an umpire's call. The Phillies forfeit the game to the New York Giants.

• 1960s: Fans routinely pelt All-Star Phillies third baseman Dick Allen with batteries -- to the point he begins to wear a batting helmet in the field.

• Dec. 10, 1989: Eagles fans pelt Dallas players and coaches -- and the broadcasting crew in the open television booth -- with snowballs. Future Pennsylvania Gov. Ed Rendell purportedly is among the hooligans.

• Aug. 10, 1999: Phillies fans litter the field with debris to show their displeasure with Cardinals outfielder J.D. Drew, who had previously been drafted by Philadelphia but refused to sign. Umpire Ed Montague confiscated two D-cell batteries that had been thrown at Drew.

• Oct. 10, 1999: Eagles fans cheer as Dallas receiver Michael Irvin lies motionless on the field and when he is removed on a stretcher after what turned out to be a career-ending injury.

• March 29, 2001: A Flyers fan fights with Toronto right winger Tie Domi after falling into the penalty box during a heated exchange.

So, why is this such a problem specifically in the City of Brotherly Shove Love?

Page 2 has the answer. Our dubious network of sources has uncovered the "actual" fine print found on the back of Eagles, Phillies and Flyers tickets. (No one cares enough to act belligerent at a Sixers game.) 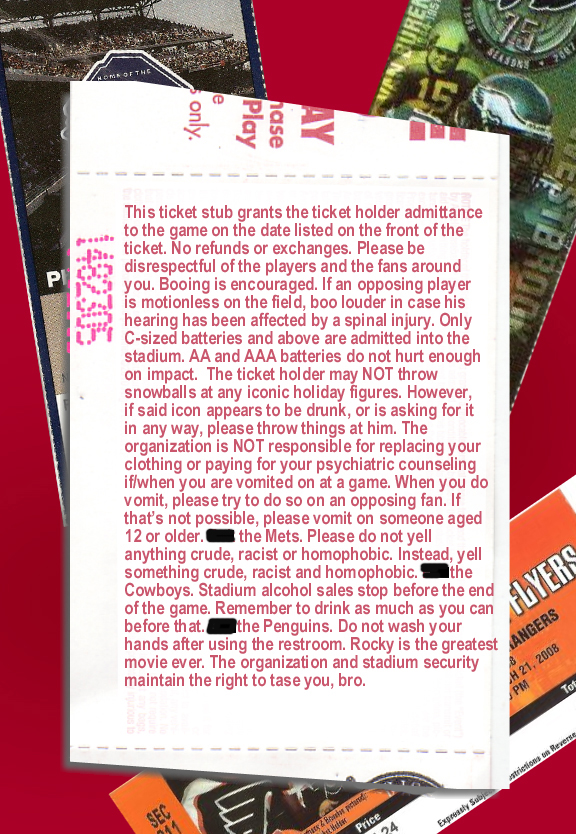