The Miracle of Istanbul 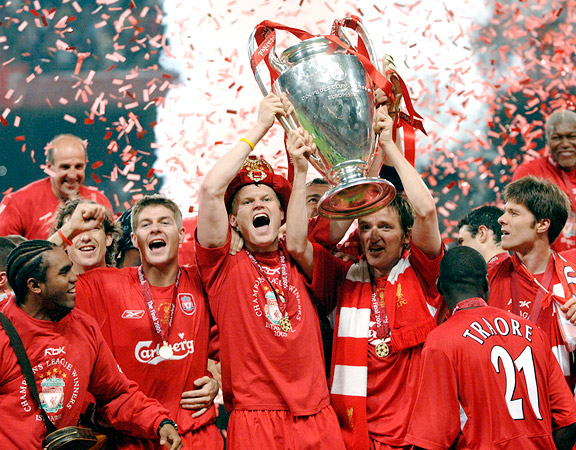 Liverpool headed into the halftime break of the 2005 Champions League final trailing A.C. Milan 3-0. The game was over. It wasn't just the seemingly insurmountable score that gave this match a feeling of finality. Milan was dominating Liverpool in the middle of the pitch, thanks in large part to their then-22-year-old star in the making, Kaká. The Brazilian had spent the majority of the first half gliding across the pitch, setting up scoring opportunities for his teammates with perfectly weighted passes into space. There seemed to be little the English side could do to stop the onslaught. To this day, it may be the best half of soccer Kaká has ever played. If you go back and watch his performance you can't help but think, "This is vintage Kaká."

But when Liverpool captain Steven Gerrard found the back of the net on a perfectly placed header early in the second half, one got the feeling Milan's 3-1 lead was the slimmest two-goal advantage in the history of soccer. Liverpool's next two goals came quickly, with Gerrard earning a penalty that yielded the game-tying goal by Xabi Alonso. And just like that, Kaká's big evening and Gerrard's break-out European performance became a footnote to a much bigger event: Liverpool had scored three goals in six minutes and would go on to win the greatest Champions League final ever played on penalties (this game was so entertaining even the penalty-kick factor did not diminish its quality).

I have often thought of Liverpool's triumph over Milan as an affirmation of English Premier League soccer as the best in the world. A less-than-stellar Liverpool team managed to beat arguably the most talented team in Italy that night in Istanbul. But that would be reading too much into the victory. Sometimes a great game is just a great game, and no larger symbolism is needed. But if there is a lesson to be learned from this match, it is to never count out an English club, especially one led by Steven Gerrard. In those fateful six minutes, Liverpool embodied the grit and effort of the English style. Only a Premier League team could have found a way to win this game.
-- Zach Benabid