Getting rid of the monkey 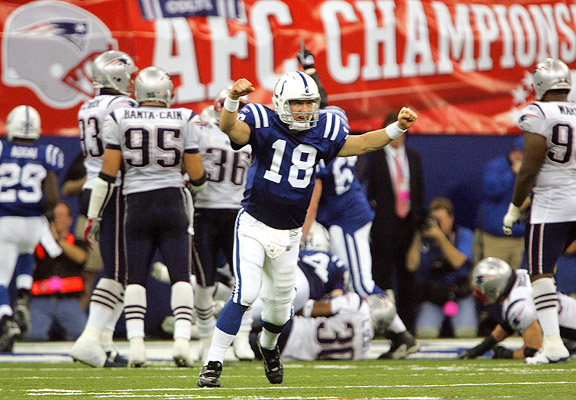 Some players never escape the monkey.

Dan Marino reached the Super Bowl in his second season, then lost and never returned.

Fran Tarkenton threw for 342 touchdown passes and more than 47,000 yards, made nine Pro Bowls and won an MVP award, but his lasting legacy (other than hosting "That's Incredible," of course) was getting trampled in three Super Bowls.

John Elway finally won the big one at the end of his career. Steve Young was famously captured by NFL Films on the sideline, late in the 49ers' 49-26 win over the Chargers in Super Bowl XXIX, saying, "Would somebody please get this monkey off my back?!"

Peyton Manning, the man with nine 4,000-yard passing seasons (and a 10th on the way), got rid of the monkey when the Colts beat the Bears in Super Bowl XLI.

But that wasn't his greatest game. That happened two weeks before in the AFC Championship Game, when the Colts defeated the archrival Patriots 38-34, rallying from a 21-6 halftime deficit by scoring 15 points in the third quarter and 17 in the fourth. At one point, the Colts trailed by 18 -- it was the largest comeback in conference championship history.

But Manning didn't want anything to do with monkeys after the game.

The monkey was alive in the first half when Manning threw an interception that Asante Samuel returned for a touchdown. It looked as though a third straight playoff loss to the Patriots loomed.

But Manning led the comeback -- he finished with 349 yards passing -- and, despite an injured thumb, guided the Colts on the winning 80-yard drive, capped by Joseph Addai's TD run with a minute left.

The Patriots still had one last chance, however. Manning couldn't watch. Tom Brady threw an interception.