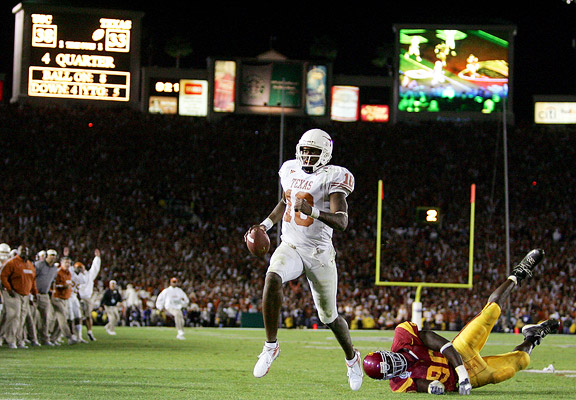 What would it take to deny a dynasty?

In the incredible end, it would take arguably the greatest individual bowl performance ever. It would take 200 rushing yards, 267 passing yards and three touchdown runs by a quarterback who could glide away from every defender on a juggernaut team that had won 34 straight games.

It would take Vince Almighty, playing on a different level in a game filled with superstars.

When Vince Young tore through the gassed (and possibly awestruck) USC defense for the last time, scoring the winning touchdown with 19 seconds left in a 41-38 Texas triumph, everyone knew we had just witnessed something epic.

Two dominant, undefeated teams -- two of the three best of the entire decade, in my book. Three 2005 Heisman finalists, in Young and USC's Matt Leinart and Reggie Bush. Future NFL players all over the field. Two of the great coaches of the decade -- Pete Carroll in search of a third straight title, Mack Brown in search of his career-validating first.

At game's end, Mack had Vince. And Vince was unstoppable.

With Texas down 12 points with 6:42 to play, Young took the Longhorns on consecutive touchdown drives -- the first 69 yards, the second 56. Of those 125 yards, Young passed or ran for all of them.

In between, USC was faced with a fourth-and-2 at the Texas 45 with about 2½ minutes to play. The Trojans went for it, for one simple reason: They knew if they gave the ball back to Young, he would beat them.

USC hasn't played for a national title since. And Texas is still cherishing its first title in 35 years.
--Pat Forde