The delicate art of the man-cry

I had two thoughts watching the French Open. 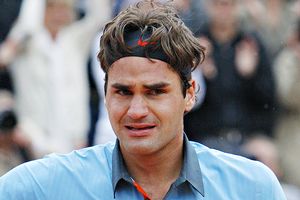 One, if that dude had jumped out of the crowd and ran toward Serena Williams while she had a racket in her hand, he would've needed a stretcher.

And two, Roger Federer's finally got the monkey off his back.

No, not winning at Roland Garros -- mastering the man-cry.

Oh, he's been "the man." And we know he can "cry." But Federer has had a problem merging the two.

After his Australian Open defeat -- in which he sobbed so unattractively and uncontrollably that a commercial break was needed to allow him time to gather himself -- I was beginning to think Federer, like so many athletes before, was a lost cause.

But on Sunday, as he stood at the podium with the Swiss national anthem playing and drops of rain falling from the Paris sky, Federer bowed his head, took a deep breath and went John Q on us.

CRY ME A RIVER

Check out these links to some of the best crying footage by male athletes:

It was the kind of performance that says "that's my quarterback" without oversized shades, drool and, well, awkwardness. I hope Brett Favre keeps Federer in mind when he holds his "I'm retiring" news conference in 2032. After all, he can't allow his man-cry from the Green Bay news conference to be the only one on tape. That was a clumsy, rookie performance with his barely audible voice and gyrations. That's like having the last pass of your career intercepted. No, Favre better take his time, presumably in Minnesota, to bundle up and rent some Denzel Washington movies.

Yeah, skip Federer. A man with Favre's credentials should just go straight to the source.

In the history of man, no one has been able to come close to consistently perform the man-cry with as much manosity as Denzel Washington. Unlike, say, tough guy Mark Messier, whose snot-driven, hunched-shoulder display during his Hall of Fame speech was so long and uncomfortable to watch that even he was critical of the performance afterward, Denzel is an emotional gymnast with impeccable balance and timing.

Take "Glory," for instance. Now had Dwyane Wade or Paul Pierce been in the staring role, not only would they have over-cried, they would've needed a wheelchair. Denzel don't need no props. He just locked eyes with his tormentors, bit down on his lower lip and allowed one single tear to trek down his right cheek. Occasionally, he would shift his lower jaw during the whipping scene, just to remind us that he was human. But other than that he was completely stone-faced and defiant. That's how you deal with an injury during the game, baby; you go "Glory" on 'em. 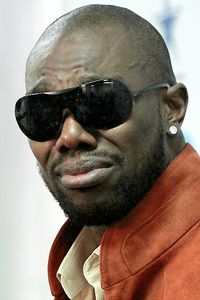 AP Photo/Tony GutierrezOh, boy ... Denzel would never cry like this.

One of the most powerful things about Denzel's man-cry is his ability to transfer the bulk of the emotion to those around him. Whether it's "Philadelphia" or "The Great Debaters," you're the one that's falling to pieces watching him while he's holding it down like Spock -- the old one, not the new one.

When Michael Vick finally addresses the public again, his ability to make us sympathize with him is key. Too many tears, and, well, it looks as if he's trying to hard. Too few tears, and he doesn't seem repentant. He's gotta go man-cry but he better watch the "I'll see you later" scene in "John Q." That's when Denzel tells his ailing son to be a good person and not make the same mistakes he did. It very well may be the best man-cry ever seen. Denzel has tears, but the viewer has three times as many. If Vick can pull that off, even Bill Belichick would flinch.

But that's probably asking too much. He should stick with Federer as an example. That was good enough.

The important thing to remember is that it's not being a man who cries that makes people, particularly men, uncomfortable. It's about how and where it's done, and for some reason athletes can't seem to get it right.

You don't do what Pete Sampras and Eric Lindros did and cry at the ESPYS. That isn't appropriate. Those are the kind of dudes who would've cried when Jesus Shuttleworth beat them at one-on-one toward the end of "He Got Game." Denzel accidentally killed his wife, went to jail and damn near committed suicide and didn't cry once. It wouldn't have been right. Adam Morrison started crying toward the end of a Gonzaga game with the outcome still in the balance. When Gene Hackman punched Denzel in the face not once but twice in "Crimson Tide," did D-Wash cry? No, he took over the ship. Had Adam taken over the ship instead of the untimely man-cry, maybe Phil Jax would be giving him some NBA Finals run.

Or at least let him dress.