Hawaii football coach Greg McMackin must feel like a victim of the old bait-and-switch routine.

On Thursday, he apologized for describing one of Notre Dame's traditions with a gay slur during the Western Athletic Conference media preview. He then dropped the slur a couple of more times as he winked at the media, asking them not to publicize his comment, even though in repeating it multiple times he made it obvious he really didn't have a problem tossing the word around. 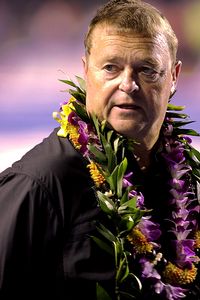 Otto Kitsinger III/Getty ImagesGreg McMackin's comments at WAC media day were unfortunate, but they also indicate a culture in which they are encouraged.

In his apology, he said he didn't mean any harm, but that he was just trying to be funny, "and it wasn't funny and it's not funny. Even more, it isn't funny to me."

What a bunch of crap.

Of course he thought it was funny. You can hear him enjoying his own joke on the audio track.

But, more tellingly, you can hear the outburst of laughter from some of the media members in the room each time he drops the slur. I've been around sports as a participant, fan and/or journalist all my life, so a football coach throwing around a homophobic slur is not news to me. Quite frankly, it isn't news to anyone, really. But the people in the room who egged him on with their laughter are the real story. A room full of educated, supposedly sensitivity-trained media professionals taking delight in McMackin's slurs. If I were him, I would have noted the laughter in the room during my apology, because if I'm going to be labeled homophobic by members of the press, I'm taking some of them down with me.

McMackin said it was a wrong choice of words, but that's not really genuine either. It was the right choice of words for the audience he was trying to connect with. He might be a second-year head coach at Hawaii, but the man has been coaching football -- college and pro -- for 40 years. He not only has an understanding of the game and the mentality of the players; he has an understanding of the people who cover the sport as well. That's why he felt comfortable using the slur. You don't have to carry a whistle or wear pads to be part of the frat. There are a fair number of gay people in the sports media who are afraid to come out at work because they don't want to be targeted by their peers, or they have reasons to believe it will negatively affect their careers. They're not fighting for the starting QB position; they're cameramen, producers and journalists. Having been in this business almost 15 years now, I can tell you that it is hardly a unique situation.

Greg McMackin cried throughout the last half of his press conference and abruptly left after he was finished reading his prepared statement, writes ESPN.com's Graham Watson Blog.

So before the sports media start throwing stones at McMackin's glass house, perhaps a trip to the mirror is in order first. Because as far as I'm concerned, if you laughed at the coach's joke about Notre Dame, or T.O.'s now-infamous "if it quacks likes a duck" remark about Jeff Garcia, or a random homophobic reference you hear in the media center, you're not that much different from McMackin. Not when it comes to this topic.

I'm not a "PC 'til I die" sort of dude. I didn't think Don Imus should have been fired, and I don't want to see McMackin lose his job. To me, those gestures are just spraying perfume on a pile of garbage. Instead, the WAC and NCAA should use this as a teaching tool for staff and athletes, and then we all should just move on. If any of my peers are sincerely outraged about McMackin's remarks, then the next time you hear something similar -- be it in your professional or personal life -- don't just go along to get along. Step up and challenge it. Because I guarantee if the overall reaction in the room had been one of shock, not laughter, McMackin wouldn't have felt comfortable enough to keep repeating the slur.