If NFL Sundays in Atlanta were a rave party during the Michael Vick era, consider them a waltz now. Oh, the No. 7 jerseys are still everywhere in Atlanta and at Falcons games, but the buzz has quieted to a whisper.

Yes, the Falcons have a promising, young team, led by the 2008 Offensive Rookie of the Year, Matt Ryan. The fans have accepted Ryan and the Falcons' surprising success. But it's not the same. It may never be. 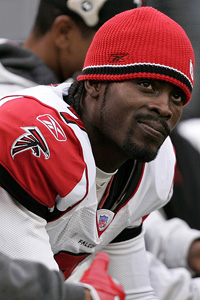 As Vick is released to home confinement, a lot of Atlantans (or ATL-iens, if you prefer) are still pining for Vick as if it was 2001 -- the year the Falcons made him the first black quarterback chosen No. 1 overall.

I wouldn't call Michael Vick the first sports love for Atlanta, but he is definitely one of its deepest. And his release has unleashed a torrent of emotions in Atlanta.

There is disappointment that Vick is even in this situation. There is still division -- and yes, I mean the racial kind. Of course, there is hope that Vick is perhaps setting himself up for one of the greatest comebacks in sports history.

"I'm rooting for him," said Chea Smith, a 33-year-old Tennessee transplant and ardent Vick fan who has lived in Atlanta for the past decade. "I just feel like he got a raw deal."

Atlanta's infatuation with Vick captured the nation's attention almost as much as the case itself. Outsiders could not understand why this city couldn't turn its back on someone involved in something as vile as dogfighting.

To understand the hold Vick has on Atlanta, you have to understand its dimensions and makeup. Vick certainly had his share of white fans in Atlanta, but it's no secret his fall was especially personal and painful for Black Atlanta. Atlanta has the seventh-largest black population in America. This was the home of Martin Luther King Jr., and over time Atlanta has been characterized as fertile ground for black success.

Enter Vick, a superhero who symbolized black power -- but not in a militant way. Here he was, a young African-American with the future of the franchise and maybe even the entire NFL in his orbit. The Falcons made him the league's highest-paid quarterback, and even the most staunch football purist had to admit Vick was special.

If Vick returns to the NFL and remains even a shadow of what he once was, it will mean just as much to many fans in Atlanta as his epic ascension.

"We're going to root for him to succeed because his success is another example of how African-Americans can overcome," said James Powell, who was born and raised in Atlanta and has been a Falcons season-ticket holder since 1999. "It will prove we're not all dogfighters, thugs or drug dealers. It's another image of the black man in the media that will be more positive than negative. We don't want the lasting image of the black quarterback in Atlanta to be, 'He fell from grace because he was a part of a dogfighting ring.'"

There is incentive to see Vick succeed the second time around beyond just wanting their former hero to re-emerge.

The Vick case exposed racial tension in Atlanta. Heated racial exchanges were made during Vick's investigation and arrest, and they haven't been forgotten.

"We're culturally mixed, but at the end of the day, we're still divided," Powell said. "His case brings out the true undertones of how we view each other, and in our cases, how we view ourselves."

The fallout from Vick's demise didn't just lead to a lingering racial split, but a sports one. There are two types of football fans in Atlanta -- Falcons fans and Michael Vick fans. The Falcons fans continue to root for their team. Many of the Vick fans do not.

Smith is one of those Vick fans who stopped supporting the team. In fact, she was so mad about how the Falcons treated Vick that when she attended games last season, she wore opposing teams' jerseys.

"I couldn't get a Reggie Bush jersey in time, but I wore black and I wore the beads I got when I was in New Orleans," Smith said. "I can't support a team that threw a player under the bus."

Smith fears the media frenzy and scrutiny in store for Vick will prevent him from ever getting a true second chance. She thinks he's leaving one prison for another.

"[When Vick is released] they'll have the split screen on TV, like with O.J. [Simpson] and the Bronco," she said. "He won't have any peace."

Make no mistake, Vick is getting a legitimate second chance. He's got a lot more going for him than most convicted felons.

Vick may never appear on a Wheaties box or have PETA throw him a homecoming party, but he still has the chance to make millions -- assuming, of course, he still possesses the same arm strength, speed and quickness that once made him the NFL's most exciting player.

If he's allowed back in the NFL -- and I believe he will be -- it's going to sting a lot of Atlanta fans when No. 7 is playing for a different team. Right or wrong, he was their guy. But one day, they'll realize letting go of Vick doesn't mean they've given up on him. It just means they're stronger than they realize.

Former Falcons QB Michael Vick left a Kansas federal prison Wednesday for home confinement. He is expected to be released from federal custody on July 20.