Better be careful with those guarantees

Lane Kiffin and Rex Ryan are either brilliant strategists or coaches who really understand how to lay the groundwork for a merciless beatdown.

The University of Tennessee and New York Jets coaches both have written huge checks with their mouths this offseason, casting their stones at Urban Meyer and Bill Belichick, respectively.

We'll find out this weekend whether the players can handle the added pressure caused by their coaches. But as foolish as it was for Kiffin and Ryan to issue challenges without having proved anything, creating put-up-or-shut-up moments is a big part of sports culture.

Page 2 invoked the spirit of fired Wyoming coach Joe Glenn (who guaranteed a win over Utah in 2007 but lost by 50), Joe Namath and Muhammad Ali, and compiled a list of some of sports' best and worst put-up-or-shut-up moments. 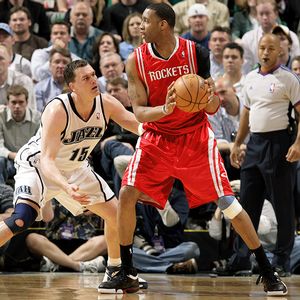 Melissa Majchrzak/NBAE/Getty ImagesHopefully T-Mac is done with his playoff prognostications.

Put up: How many times can a man set himself up for failure with a false fearlessness?

For McGrady, who hasn't advanced past the first round of the NBA playoffs in eight tries, the answer is infinity.

• 2002: With Orlando trailing the Charlotte Hornets 2-1 in their opening-round best-of-five playoff series, T-Mac did the honorable thing and guaranteed his Magic would never ever let the Hornets take Game 4.

• 2003: The No. 8-seeded Magic were ahead 3-1 on the top seed, the Detroit Pistons. McGrady was so confident the Magic would eliminate the Pistons, he told reporters how good it felt to "finally be in the second round."

• 2007: T-Mac's Houston Rockets entered their opening-round playoff series versus the Utah Jazz after having a 22-game winning streak that season. "If we don't win this series, it's on me," McGrady said.

Shut up: McGrady's disappointing postseason career only proves how much the universe hates unsubstantiated cockiness.

• 2003: McGrady counted his basketballs before they were racked. In the last three games of that series, the Pistons beat the Magic by an average of 20 points and became the seventh team in NBA history to advance after facing a 3-1 deficit.

Put up: Showcasing an unknown psychic ability, Kitna shared his vision for the 2007 Detroit Lions with a Detroit radio station before the season began. "I'll keep to myself what I think we actually will win. But it's more than 10 games," Kitna told Detroit's WDFN AM.

Fifty years of losing and ineptitude, and a 3-13 record in '06 were going against a clairvoyant quarterback who had thrown 22 picks the previous season.

Shut up: Even Miss Cleo was embarrassed for Kitna. The Lions finished 7-9 in '07, and a season later, they really made their mark as the first 0-16 team in NFL history.

Put up: LaDainian Tomlinson once said the Patriots "showed no class" and later said he wasn't surprised they were involved in something as unethical as Spygate. Center Nick Hardwick blasted then-Patriot Richard Seymour, anointing him the dirtiest player in the NFL. And after the Chargers beat the Colts to advance to the AFC Championship Game against the Patriots in January 2008, defensive end Igor Olshansky -- not to be confused with a Russian composer, dictator or ballet dancer -- said the Chargers weren't worried because the Patriots "know what's up."

Shut up: Remember the part in "Superman II" when General Zod and his two supernatural goons forced Superman to give up his powers, and then used similar abilities to nearly destroy Superman? That's what New England basically does to San Diego.

In January 2007, after the Chargers suffered a 24-21 loss at home to the Patriots in the AFC divisional round, several Patriots stomped on the Chargers' lightning bolt at midfield. New England nose tackle Vince Wilfork mock-imitated Shawne Merriman's "Lights Out" sack dance, and Rosevelt Colvin flashed the "choke" sign to the horrified and angry Chargers fans.

True enough, San Diego ended New England's 21-game winning streak in Foxborough. But when it has counted the most, the Patriots have disrespected the Chargers more than Lil Mama disrespected Jay-Z. 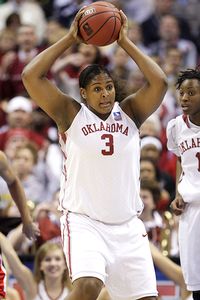 AP Photo/Mark HumphreyCourtney Paris could have cost herself a whole lot of money against Louisville.

Put up: On senior night, the Oklahoma women's basketball star told fans that if the Sooners didn't return from the 2009 NCAA tournament with a national championship, she would give back her scholarship -- minus interest.

Shut up: Question: How much does a bad guarantee cost?

School spirit combined with competitive desire can be a powerful motivator -- but it wasn't enough to affect Angel McCoughtry's jump shot. McCoughtry scored 14 of her 18 points in the second half as Louisville upset Oklahoma for its first trip to the Final Four.

Put up: Ole Miss stunned Florida at The Swamp last season 31-30. And no one was more devastated afterward than Tebow, who gave Florida fans "The Pledge."

Shut up: The Gators haven't lost since Tebow's passionate speech, which includes beating Oklahoma for the national title last season. In March, Tebow's speech was engraved on a plaque and placed outside the Florida football facility.

This is why Tebow doesn't do pushups; he pushes the Earth down.

Put up: The New York Rangers were on the verge of elimination in the 1994 Eastern Conference finals when Messier guaranteed a Rangers victory in Game 6 to even up the series and force a deciding Game 7.

Shut up: Messier backed up his audacious proclamation with a hat trick. The Rangers won not only the game, but also the series and subsequently the Stanley Cup -- their first in 54 years.

Put up: At Super Bowl XIII's media day, the flamboyant linebacker told a throng of reporters that Terry Bradshaw was so dumb, he couldn't spell "cat" if you spotted him the "c" and the "a." It was one of the greatest quotes in the history of Super Bowl media day.

Shut up: All that mattered was that Bradshaw knew these letters: "T-D" and "M-V-P." He threw for 318 yards and four touchdowns to win the third of his four Super Bowls. 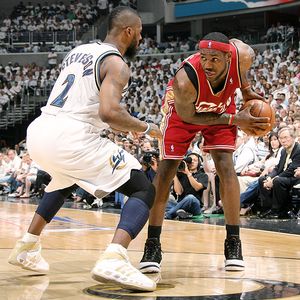 Put up: After a regular-season win over the Cleveland Cavaliers in March 2008, Stevenson called LeBron James "overrated." James countered by saying that if he responded to that, it would be like Jay-Z responding to disparaging words from Soulja Boy. Marky Mark and the Funky Bunch pretended to be offended.

Shut up: A couple of months after Stevenson's comment, the Cavaliers took the Wizards down in six games in the NBA playoffs. Not only was James' response to Stevenson's "overrated" jab more clever, but he reportedly got his pal Jay-Z to record a special diss record about Stevenson. James released the song at a party he threw in D.C. during the Wizards series, making sure Stevenson was thoroughly insulted.

Put up: Since we're on the subject of King James, it's only fair we bring up his teammate Mo Williams. When the Cavs trailed the Magic 2-1 in the Eastern Conference finals this past season, Williams guaranteed Cleveland would win not only Game 4 but the entire series.

Shut up: Most of us know how this story ended. The Magic won the series. Then came Handshake-gate and Dunk-gate, and now we're stuck in LeBron-to-New-York-gate.

Put up: Facing the team many people were ready to call the best in NFL history, Burress -- in front of hundreds of reporters at Super Bowl XLII media day -- guaranteed a New York Giants victory over the undefeated New England Patriots. He even gave the final score, 23-17.

Shut up: Burress' guarantee will go down as one of the great ones. The Giants won 17-14, pulling off arguably the greatest Super Bowl upset ever. If only Burress would have exhibited that much clarity in his personal life.