Shades of gray in Sammy's skin

If you've seen recent photos of him, it's a fair question. The last time most of us saw Sosa, his skin was the color of mahogany. Now it looks as if he dipped his face in baking powder.

Photos of Sosa at the Latino Grammy Awards last week floated from inbox to inbox and blog to blog, arguably causing as much controversy as his dishonest performance at the congressional steroid hearings in 2005. 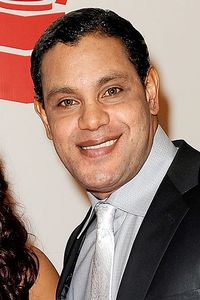 Kevork Djansezian/Getty ImagesThis is Sosa's look last week …
And just as I didn't believe then that Sosa was steroid-free, I don't buy now that Sosa's drastically lightened skin is merely the result of a skin rejuvenation process and an illusion caused by bright TV lights at the awards show.

According to Sosa, who addressed the skin controversy with ESPNDeportes.com's Enrique Rojas, he is using a cream that "whitens" his skin. Mostly, Sosa said, it's a skin softener.

Yeah, and using that corked bat was a "mistake."

Sosa certainly isn't the first sports figure to use cosmetic assistance -- [cough] Jerry Jones -- but when a once-dark-complected man from the Dominican Republic is whitening his skin and wearing green colored contact lenses, it suggests he's suffering from issues that extend well beyond dermatology.

Sosa's new look implies that he has a "color complex" -- a term used to describe those who have been brainwashed to believe adopting more "white" features will help them gain mainstream acceptance.

If you don't believe there's any racial component to Sosa's new look, you haven't been paying attention to the backlash he's been receiving since those photos hit the Web. Time magazine wrote about it, quoting Chicago dermatologist Dr. Jonith Breadon, who asked "Why would he do this?" And during halftime of Tuesday's NBA broadcast on TNT, Charles Barkley and crew clowned Sosa, even going so far as to paint Barkley's face in white cream to mock the former Cub.

And in the background, analyst Kenny Smith shouted, "Say it loud! … I'm black and I'm proud!"

Although we might never know Sosa's true motivations for changing his appearance, the consensus is that he lightened his skin in an effort to look whiter. 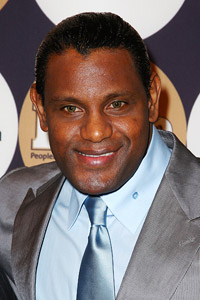 Andrew H. Walker/Getty Image … and this is his look in May.
The same was said about Michael Jackson, even though he was diagnosed with the skin condition vitiligo, which reportedly was the cause of his skin tone's transformation from caramel to milky white.

But vitiligo never explained the obvious surgical changes to Jackson's nose and lips. And using a skin softener doesn't explain why Sosa's eye color and hair texture are suddenly different.

Sosa claimed he's not a "racist," but that doesn't address whether he's being honest when he says he's happy being who he is.

"A lot of younger people probably just think Sosa's weird," said Dr. Todd Boyd, a professor of critical studies at the USC School of Cinematic Arts. "Whereas those old enough to remember the days when Ebony magazine still had ads for skin lightening cream on their pages, these people might look at Sammy with a certain amount of disgust and see his actions as the epitome of self-hatred."

I've always questioned whether Sosa tried too hard to be accepted by white America. When Sosa and Mark McGwire teamed up to bring baseball back to relevance with their exciting home run chase in 1998, Sosa seemed all too eager to play the role of the buffoonish sidekick. His antics made it easier for Sosa to be accepted as a friendly challenger instead of a villain.

"Sammy never seemed to realize that the joke was on him every time he acted out that Chico Escuela role: 'Baseball been berry, berry good to me,'" said Boyd, referring to the fictional baseball player Garrett Morris played on "Saturday Night Live." "And then all of a sudden he can't speak English when he's sitting in front of Congress? I'm sure Sammy has his fans, but a lot of people view him as a clown."

Some of you are probably wondering why Sosa's skin color is an issue, especially given that white people routinely go to tanning booths to darken their skin, and non-ethnic women receive injections and implants that make their lips look fuller and their behinds bigger.

The difference is history and perception. Historically, black features have been ridiculed, exaggerated and patronized, often for the amusement of whites. As a result, some people of color have adopted a negative attitude toward their looks, so when someone like Sosa goes to such lengths to alter his appearance and says -- even in jest -- that he plans to market the product, too, you have to wonder whether there's an underlying issue of racial identity.

Even though I'm wary of Sosa's motives, I believe him when he insists he isn't trying to look like Jackson. I just wonder why Sosa isn't satisfied looking like himself.