Sports predictions can be very wrong

Mass death. Widespread destruction. The single biggest "I told you so" of Darren Daulton's life. If the ancient Mayan calendar has things right -- which is to say, the ancient Mayan calendar as interpreted by the make-busy screenwriters and midnight oil-burning CGI artists behind the new film "2012" -- the world soon will end, not with a bang, but with John Cusack attempting to outrun an imploding glacier.

Lucky for us, prognosticators almost always blow it. Especially when it comes to sports.

As a nod to the film, Page 2 looks back at 12 of the least-prescient athletic predictions of the past half-century. And you thought your local weatherman -- pardon us, meteorologist -- was inaccurate: 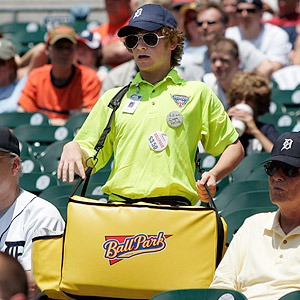 Prediction: "Drugs will be sold openly at sporting-event concessions … the hot dog of tomorrow will pack the same kick as the marijuana brownie of today." -- Sports Illustrated, 1974

Accuracy: Totally off. The only kick packed by the 4,800-calorie burger available at a Michigan minor league ballpark -- four pounds of beef, five slices of cheese, salsa, corn chips and a cup of chili -- is that of adult-onset diabetes.

20/20 Hindsight: Replace "hot dog" with "warm, 8-ounce beer," "kick" with "financial kick in the groin" and "marijuana brownie" with "used domestic sedan," and the premise is fairly accurate.

Prediction: "A football game of the future may consist of no more than four plays, each replayed over and over, dissected, analyzed and criticized from a dozen angles of slow-motion replays, with each player's performance judged and scored for its nearness to perfection (like figure skating)." -- Sports Illustrated, 1974

20/20 Hindsight: Actually, the rest of the above prediction pretty much describes 80 percent of the in-season football programming on our parent network. Gulp.

Prediction: "Next thing you know, you'll be able to push a button on your remote control to order whatever product's being advertised during the TV timeout of an NFL or NBA game. Have it delivered to your door before halftime, too." -- The San Diego Union-Tribune, 2000

Accuracy: Oops. Kozmo.com went out of business in 2001. In related news, Kozmo.com managed to stay in business until 2001.

20/20 Hindsight: To be fair, it's possible to click a button on your laptop and order the same official team hooded sweatshirt worn on the sidelines by your favorite NFL coach. Alternately, you could just go to the office in a Snuggie.

Prediction: "Even in 2000 the referees won't use TV replays to assist them in making their calls." -- Sports Illustrated, 1979

Accuracy: Swing … and a miss. (Unless you're talking baseball, in which case it's more like stealing home on an obviously blown -- but still unreviewable! -- call.)

Prediction: "If the general intelligence of the population improves, the appeal of violence in sport might be reduced." -- Sports Illustrated, 1974

Accuracy: Fact No. 1: Mixed martial arts. Fact No. 2: MMA fighter Melvin Costa has a belly-button-surrounding tattoo reading: "I have a small penis." Fact No. 3: The above prediction is wrong on both counts.

20/20 Hindsight: If the general intelligence of the population improves, said population will be too busy burning copies of "The Secret" and prosecuting the makers of "Transformers 2" at The Hague to worry about violence in sport.

Prediction: "We may not see men fighting to the death, but we could have animals killing each other -- cockfights, pit bulldogs, maybe even piranhas eating each other to death on television." -- Sports Illustrated, 1974

Accuracy: If "The Hills" is any indication, this one is actually dead-on.

20/20 Hindsight: A truer -- if mildly figurative -- description of reality TV has yet to be written.

Prediction: "The day is not far off when people will be led to their [stadium] seats by the sound of ocean waves, of wind, of singing birds, of gurgling brooks." -- Sports Illustrated, 1974

Accuracy: Answer: ocean waves, wind, singing birds, gurgling brooks. Question: What are four sounds not used in 2 Unlimited's "Get Ready For This"?

20/20 Hindsight: Whoever made this prediction likely had just consumed a "hot dog of tomorrow."

Prediction: "Once [the movie] 'Rollerball' is released, it seems highly likely that there will be demonstration games, and if Rollerball catches on, United Artists could find itself with a multimillion-dollar franchise." -- Sports Illustrated, 1975

Accuracy: No. No. A thousand times no. To put things another way: Do the "South Park" guys have a multimillion-dollar franchise in professional BASEketball?

Prediction: "Owners to organize teams based on ethnic or ideological loyalties to regenerate enthusiasm -- games featuring the Steel-workers vs. the Executives, the Hippies vs. the Straights, Hunters vs. Animal Lovers." -- Sports Illustrated, 1974

Accuracy: Far out, man! And, like, so bogus. Does America even have steelworkers anymore?

Accuracy: Remember the ill-fated PPV, $100 million-losing Olympic Triplecast? Neither does anyone else.

Prediction: "Imagine a Washington Redskins team with 6-foot-10 wide receivers, sub-4.0 speed at the corners and a 400-plus pound average across the offensive line." -- Washington Times, 1999

Accuracy: Imagine a Washington Redskins team that can score more than 17 points a game. No, seriously -- you'll have to imagine it.

20/20 Hindsight: Originally made by yours truly, the above prediction will be preserved on the Internet for the foreseeable future. Is it 2012 yet?