Page 2: The lamest sports banners ever

The people have spoken. And in doing so, they've taught us a valuable lesson.

When it comes to Lame Sports Banners, there's plenty of dubiousness to go around.

Page 2 recently challenged readers to find and submit the lamest sports banners they could find. Like the Baltimore Orioles' CONGRATULATIONS RAFFY! 3,000 flag. Or the Idaho Stampede's retiring Randy Livingston's jersey. Or the Washington Mystics' 2002 and 2003 WNBA attendance champion banners, which we submitted were the rock-bottom, end-of-the-line lamest flags on the planet, and quite possibly the universe.

How shortsighted of us.

After sorting through your photos and suggestions, we've discovered that sports banner lameness is truly in the eye of the beholder. Make that many, many beholders, from Indianapolis to New York to Anaheim, Calif., to Durham, N.C. While rating banners is fun, it's ultimately akin to sitting through a double-billing of "Alien vs. Predator" and "Aliens vs. Predator - Requiem."

No matter who wins, we lose. 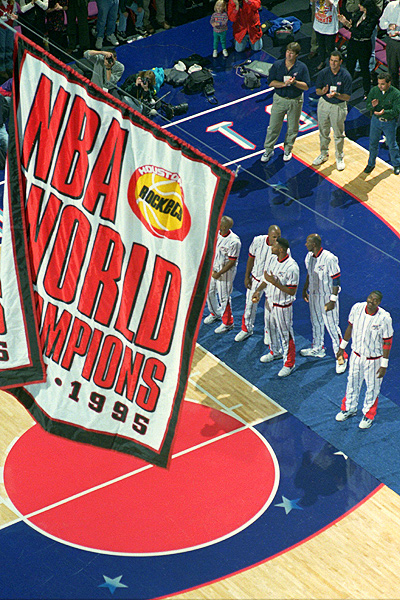 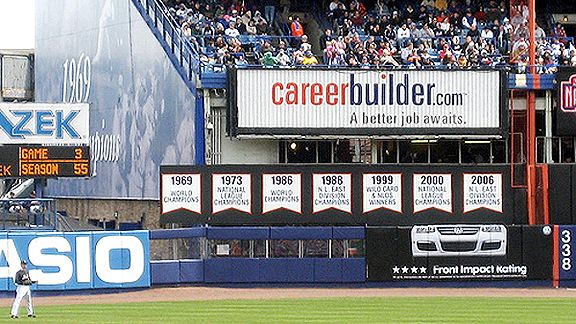 Lameness quotient: Very high. Largely because the banner shares space with two World Series pennants, which is like placing a sixer of wine coolers in the same cellar as a 1787 Chateau Lafite. 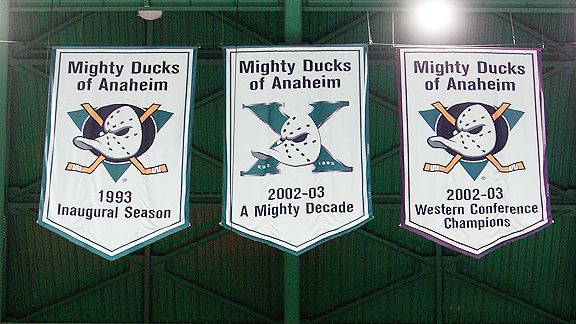 Honors: Simply existing -- despite a coldly indifferent universe, a Darwinian sports marketplace, an Estevez-tainted nickname and the second law of thermodynamics, none of which seems to impact the ever-expanding Ponzi scheme NHL.

Lameness quotient: High. Never mind the cartoon goalie mask. Asia, 38 Special, and Hall and Oates all have been making (and we use the term liberally) music for roughly 30 years, in turn begging the question: Is a single decade of mediocrity worth getting excited over? 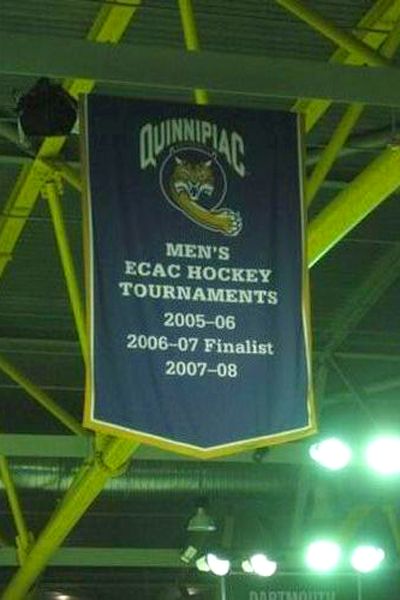 Lameness quotient: Awe-inspiring, given that every ECAC team makes the tournament every season. Still, nice work advancing to the 2006-07 finals, which is kinda sorta almost but not really like winning ... and no, the Bobcats did not play host to the tournament in any of those years.

Fun fact(s): As reader vandet2 puts it, Quinnipiac is "going to need a new banner soon" -- that is, unless it opts for one reading A MIGHTY DECADE. 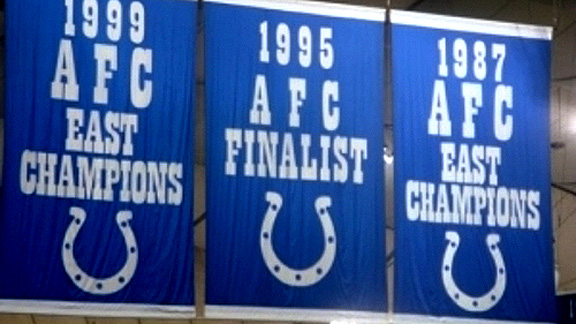 Honors: Reaching the 1995 AFC title game, which is almost like winning the Super Bowl, except for losing two games early. 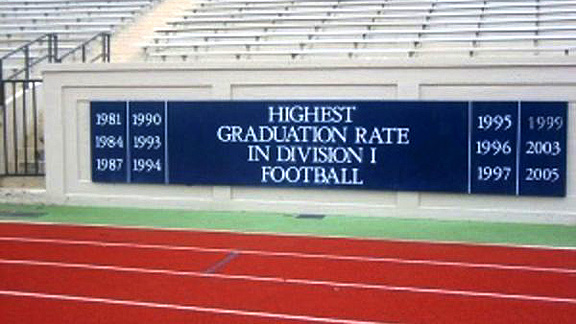 Honors: The highest graduation rate in Division I football -- because you can't trust those no-practice, all-study Div. I-AA nerds to not mess up the curve.

Lameness quotient: Moderate. On one hand, celebrating graduation rates in a football stadium is like celebrating donations to UNICEF in an aircraft carrier bomb bay; on the other hand, what else is Duke football going to celebrate? (Well, besides the fact that Pete Gaudet never coached the team?)

Fun fact(s): Banner implicitly suggests that six-peat-foiling Class of '98 has some 'splaining to do. What, were the Blue Devils too busy going to a bowl game to study? See us after class! 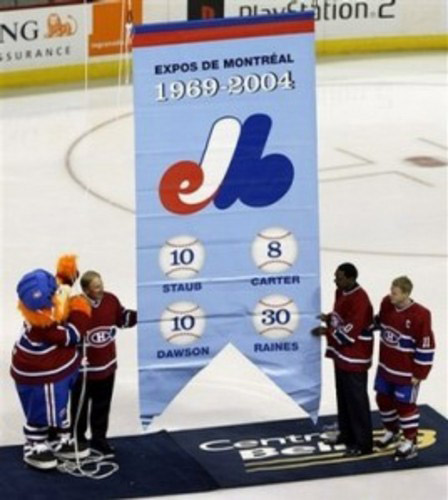 Lameness quotient: Both pathetic and tragic. Because the Expos are no more -- say hello to your Washington Nationals! -- Les Misérables' banner hangs in the home of Montreal's hockey team, a baby blue vampire bat. 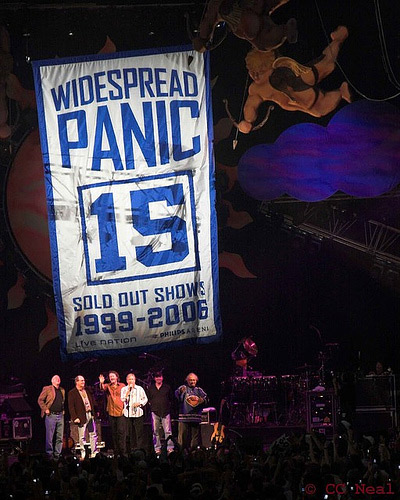 Fun fact(s): A real sports town -- for instance, Philadelphia -- would never defile its sacred athletic arenas with kerfuffle celebrating something like 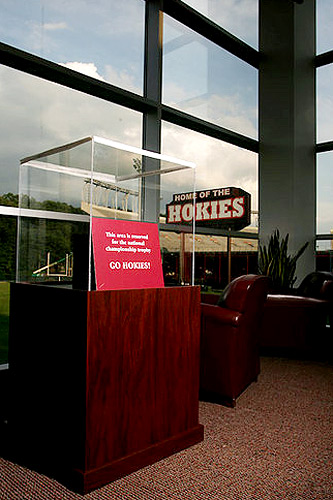 Lameness quotient: Synapse-frying. Though the Hokies' empty trophy case/placard isn't technically a banner, we had to include it anyway. After all, if your college roommate posted a sign on his pillow reading THIS AREA IS RESERVED FOR MEGAN FOX, OR MAYBE OLIVIA WILDE, would you laugh ... or recommend a psychiatric evaluation?

Fun fact(s): Without a playoff system, all of college football's national championships are fictional. Smooth move, Virginia Tech: The joke's on the rest of us! 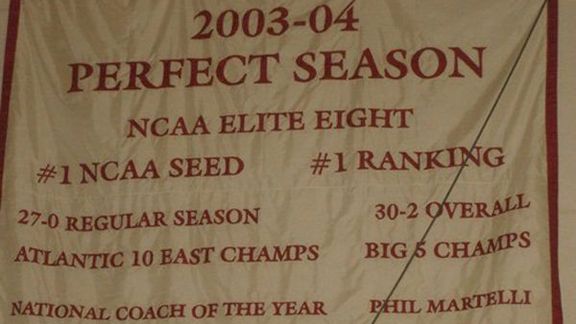 Lameness quotient: Gaze upon it, ye Widespread Panic banners, ye wild-card commemorations, ye graduation rate celebrations. And despair. It's one thing to proudly puff up an accomplishment that nobody else remembers or deems special -- UNLV went undefeated in the 1990-91 regular season; does anyone care? -- but quite another to contradict yourself while doing so.

Fun fact(s): Everybody knows that only one team ought to brag about a perfect season.