Can Oregon's placard code be broken?

"Magic" means a handoff from a three-receiver formation.

Unless it's a pass play.

After attempting to crack the University of Oregon football team's bizarre play-calling code -- did Bear Bryant ever surreptitiously communicate via Lee Corso's disembodied noggin? -- I can safely state the following.

Chip Kelly is a cryptological wizard and immediately should be tapped to run the National Security Agency.

That, or the Ducks' head coach simply likes screwing with opponents' heads.

This much is certain: When No. 2 Oregon plays top-ranked Auburn for the BCS title on Monday night, the Ducks will showcase both a high-scoring offense and a sideline signaling system that is, in a word, unique.

Unique, as in Oregon doesn't appear to call plays via traditional signals or shuttling substitutes to and from their bench, but rather through an eye-catching series of poster-sized placards held aloft by backup quarterback Dustin Haines. 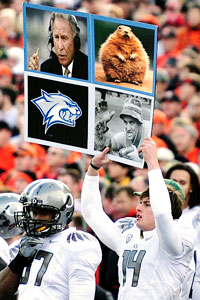 Brock Ameele photo This sign uses the logo of the University of New Hampshire, which just happens to be Chip Kelly's alma mater.

Unique, as in each placard displays silly, seemingly nonsensical pictures of -- among other things -- a battleship, a shamrock, a Cincinnati Bengals logo, the words "MAGIC" and "GLYCERINE," a map of New Hampshire and Corso's dome, alongside the guillotined visages of various other television sports personalities.

Unique, too, as in one of the placards features a grinning, pointing Burger King mascot.

The latter piqued my interest. Football is a paranoid, cloak-and-dagger sport. Using the Burger King mascot seemed brazen. Like a taunt. Or a dare: Our system is so smart, so airtight, we're going to rub a cartoonish fast-food mascot in everyone else's face. Just because.

Insufficiently steeped in the dark arts of cryptology -- read: terrible with numbers -- we reached out to Mark Kozek, a math professor at Whittier College in California.

Kozek is a code-cracking buff. He also used to play and coach football. Which made him ideal. After all, the Oregon code seems integral to the team's success. Indeed, the Ducks reportedly adopted the system this season for two reasons:

(1) Coaches felt that Ohio State may have been stealing the Ducks' hand signals during last year's Rose Bowl;

(2) The team needed a quicker way to communicate.

The latter point was key. Oregon's prolific offense -- No. 1 nationally in points scored, No. 2 in yards per game -- is rooted in rapid execution. The Ducks go no-huddle almost exclusively. They spend as little as 13 seconds between plays. They don't give defenses time to make substitutions or adjustments; they don't give defenders time to think or breathe; they've outscored bewildered opponents 277-77 after halftime this season. And they can't do any of that without a reliable signaling system that takes less than five seconds to process.

See a picture. Run a play. Run the other guys ragged.

Scouring the Web for clues to Oregon's system, we discovered the following:

• Oregon got the idea from Oklahoma State, which deployed a similar signaling system against the Ducks during the 2008 Holiday Bowl.

• During each game, Oregon uses six placards -- each divided into four quadrants containing one image, for a total of 24 images. 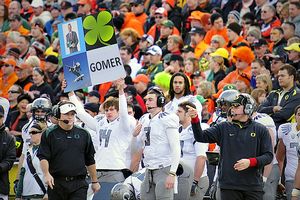 Brock Ameele One backup quarterback holds the sign. Another strikes a pose. Then there's the wristband guy, who bangs out signals like a third-base coach on speed.

• Kelly told ESPN that the placards communicate formation, play and snap count, and that each image means something.

• Ducks offensive lineman Mark Asper said the system is simple -- something tired, distracted 19-year-olds can easily grasp -- and that his teammates are not adding "the top and bottom square. We're not dividing matrices out there."

• Providing a hypothetical example of how the code works, Asper said a picture of golfer Phil Mickelson could indicate a snap count of going on two, because Mickelson "always finishes second."

Mickelson on two. Funny. Make sense, even. But what about the Burger King mascot?

Did he indicate a "have it your way" option play?

A "whopper" of a deep pass?

Was he just there to torment us, racking our brains with awful puns?

We still had no idea. More data was required. To that end, we devised a plan, one to shame New England Patriots director of football surveillance research Ernie Adams.

First, Kozek charted Oregon's offense over the course of two road games -- at USC and Oregon State -- logging formations and plays while watching the team on television. Meanwhile, we hired in-stadium photographers to take pre-play snapshots of the Ducks' sideline, focusing on the placards.

Next, Kozek and student Tobit Raff compared the photographs to the game logs, looking for patterns and correlations.

"We took over our entire department lounge," Kozek said. "We had all the data spread over all the tables. In piles. It was old-school, getting-your-hands-dirty analysis."

Hey, math guys, what are you doing analyzing plays?

"They walked away perplexed," said Raff, who played football as a child and remains an avid fan of the college game. "I was like, 'Hey, math people can do football, too.'"

So what did the math people discover?

1. Oregon doesn't use the placards all the time: Against the Trojans and Beavers, the Ducks ran 162 total offensive plays. Only 109 involved placards. Oregon rarely uses the signaling system on the first play of a new drive; against Oregon State, the Ducks sustained entire drives without using the signs. 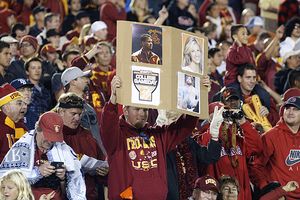 2. The placards are (mostly) consistent: As previously reported, Oregon uses six placards per game. Each contains four images. The upper left quadrant usually contains a picture of a television sports personality. The lower right quadrant typically has a word. The others contain animals, objects, cartoons, maps ... almost anything. While the specific images on particular placards don't appear to change, not every placard is used in each game. Between the USC game and the regular-season finale at Oregon State, for instance, five placards matched. But one was new, featuring a giant shamrock, a fighter jet, Jon Gruden and the word "GOMER."

3. By themselves, the placards don't appear to consistently indicate play selection: In some cases, three or four closely related/identical plays correlated with the same placard; more often, what appeared to be identical plays correlated with different placards. Because Oregon's spread offense features a number of options on each play, some variance is to be expected. That said, the implication is clear.

The signs alone don't tell you exactly what the Ducks are about to do.

To analyze the data, Kozek and Raff identified the placards by the word image in the lower right corner. (If there was no word, they labeled the placard "NONE"). Here's their breakdown:

Kozek suspects that each placard may represent a family of plays. How so? After flashing the "TREE" placard against USC, Oregon lined up in only two different formations -- out of which the Ducks ran similar passing and running plays. The "MAGIC" sign had an even stronger correlation, as Oregon lined up in the same formation seven out of 12 times, called 11 rushes and appeared to run the same handoff on eight of those plays.

4. Oregon isn't just using placards: The whistle sounds. The offensive line hustles to the new line of scrimmage. The officials scramble to keep up. Ducks quarterback Darron Thomas stares at the sideline, where Haines holds a placard. Oregon's receivers stare, too.

It turns out pictures of sharks and ESPN broadcaster Scott Van Pelt aren't the only thing they're glancing at.

Another headset-wearing backup quarterback, usually Bryan Bennett, stands in a peculiar pose, holding it for a few seconds. Meanwhile, a man who appears to be an assistant coach -- but curiously does not resemble any of the assistants on Oregon's team website -- wears brightly colored wristbands and makes quick series of hand signals.

"He looks like a third base coach," Kozek said. "On speed."

The above happens regularly. Moreover, there often are two people with headsets making arm signals. Sometimes, when the Ducks call an audible, every offensive player looks to the sideline at the same time, as if someone had yelled "Fire!" 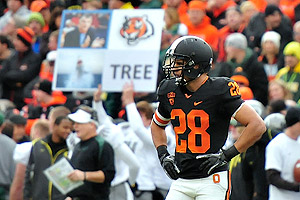 Brock Ameele photoOregon State's Suaesu Tuimaunei is just one of the defenders left short of breath by the Ducks offense.

What does this all mean? It means the Oregon code involves more than goofy images. Maybe the Ducks get a portion of their play call from the placards and the rest from the hand signals. Perhaps the hand signals tell the Ducks which images to care about, and which ones to ignore. Perhaps Oregon's quarterback, linemen, running backs and receivers look at different signals, the better to speed up their offense.

"Kelly said one picture shows the play, formation and snap count," Raff said. "But clearly this is not the case. We see multiple formations featuring the same placard."

Whatever's going on, the extra layers serve a purpose: the system remains quick, but is much, much harder for prying opponents to decode.

"The more variables a system has, the tougher it is to crack," Kozek said. "X plus two, that's easy. But if you have seven variables, it doesn't just double the number of answers. It might raise it to a power.

"With Oregon, just adding this visual layer is like adding four or five variables. Like the difference from checking 50 things to 5,000. I think that's what they're doing."

Raff suggested a related possibility: the placards are a colorful ruse. The football equivalent of World War II's Operation Fortitude, in which the Allies used phony battle tanks and bogus communication leaks to convince Germany that the main invasion of France would not take place in Normandy.

Did Kelly and his players previously talk to ESPN about the placards on purpose, as part of a clever misdirection play?

Do they want us to focus on the funny pictures?

"It's likely that the placards are less relevant than originally advertised," Kozek said. "They're possibly red herrings."

Kozek and Raff believe the placards matter. Assuming that's the case, the Oregon code is ingenious. Likely unbreakable. Not because it's deviously complex -- but rather, because it's so simple.

A quick history lesson: During WWII, the Allies were able to crack Axis codes because the Germans and Japanese used universal, well-understood mathematical concepts. A common language of deception.

By contrast, the Japanese were flummoxed by American codes. The reason? They weren't codes at all, simply Navajo soldiers -- the famed "wind talkers" -- speaking to each other in their native tongue, using, say, the word for "turtle" to describe a tank.

"The placards are a language that only the Oregon football players understand," Kozek said. "That's the brilliance of it. We're taking pictures. Doing math analysis. Correlations with formations. But they're just two Navajo guys talking."

In the military, there's a concept called "actionable intelligence" -- that is, information you actually have time to act upon. Suppose you're an Oregon opponent. You somehow crack the code. Now what?

You have to teach your defense what each image means. The ins and outs of every Ducks play and variation. The right defensive calls to stymie each one.

Come game time, your defenders still have to execute.

OK, the placard shows "TREE." Oregon's going to run right. How do we stop that? Play 135. Right. Get in that formation. Get into individual assignments. Everyone remember what to do?

"Don't forget, you have to do all of that in 10 seconds," Kozek said. "Conveniently for Oregon, most teams that play them have less than a week of practice beforehand. And even if you had five or six weeks to prepare your team, it would be very difficult to train them."

In other words: if Auburn or anyone else can figure out the method behind the madness of bald eagles and Corso's well-coiffed head -- and then apply that knowledge to gain an on-field advantage -- its coaches are probably wasting time and brainpower focusing on mere football games.

No wonder the Burger King mascot is grinning.

Special thanks to Mark Kozek and Tobit Raff for research assistance and to Nathan Gonzalez and Brock Ameele for photography.