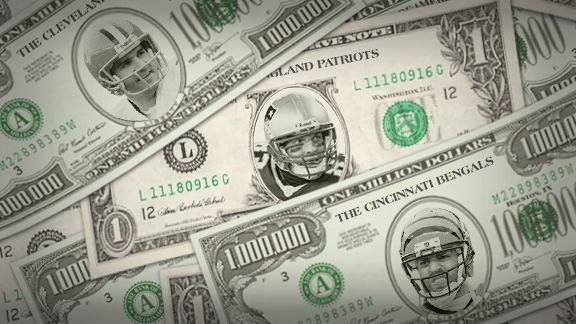 Cork-popping extravagance is out. Belt-tightening austerity is in. Following the Great Recession, doing more with less isn't simply a euphemistic corporate dictum. It's a way of life. And in these cost-conscious, productivity-first times, the sweetest letters in the alphabet have gone from VIP to ROI -- return on investment.

So what about sports?

No NFL team was more efficient than the Falcons. How did they do it? By masterfully following the league's Aughts-era blueprint for success: (A) acquire and replenish a base of young, relatively undervalued players through the draft; (B) splurge for big-ticket free agents sparingly. Case in point: while Atlanta made Dunta Robinson one of the league's highest-paid cornerbacks in the offseason with a six-year deal potentially worth $57 million, the rest of the team's starting secondary -- second-year player William Moore; third-year players Brent Grimes and Thomas DeCoud -- tallied 11 interceptions while earning just $1.34 million in combined base salary.

Penny-wise: A former undrafted free agent who earned $470,000 in base salary, Eric Weems led the NFL in kick return average and had a playoff-record, 102-yard scoring return against the Packers.

The Bucs may be more fortunate than shrewd, as their low overall payroll is partially the result of Jon Gruden/Bruce Allen-era personnel miscalculations, such as underperforming former first-round picks -- such as Michael Clayton -- failing to earn large veteran contracts. That said, the team's current regime has done a good job of finding diamonds in the rough, including undrafted running back LeGarrette Blount (1,007 yards, 5.0 yards per carry) and fourth-round receiver Mike Williams (964 yards, 11 TDs), each of whom earned just $320,000 in base salary.

Penny-wise: Second-year quarterback Josh Freeman had a base salary of $395,000, yet threw for 3,451 yards and 25 TDs while posting a higher passer rating than megabucks peers Eli Manning and Carson Palmer.

Surprised? Neither are we. The Steelers long have been the anti-Dallas Cowboys, low-key value shoppers. That said, don't mistake their frugality for cheapness: Pittsburgh is quite willing to pay market prices to retain its own free agents ... provided it first extracts three to five years of bargain-basement, rookie-contract service out of players such as Hines Ward, Troy Polamalu and Casey Hampton.

Penny-wise: Despite tallying 25 sacks in 2008 and 2009, Pro Bowl linebacker LaMarr Woodley earned only $555,000 in base salary this season, as the Steelers declined to renegotiate his rookie contract.

With the second highest payroll in the league -- a large chunk of that going to Tom Brady and Vince Wilfork -- the Patriots spent a lot. Fortunately for their financial efficiency, they also won. A lot. A league-leading 14 victories vaulted New England into the top five, as did the club's ongoing commitment to roster value. Under Bill Belichick, the Patriots have consistently: (A) pursued budget free agents; (B) traded players in their peak earning years; (C) gotten production out of young players such as rookie tight end Rob Gronkowski; (D) moved back in the draft to make said young players even more affordable. (Thirty-three players on New England's roster have three seasons or fewer of NFL experience). Really, what else would you expect from a franchise that made the humble hoodie a fashion statement?

Penny-wise: Receiver Wes Welker ($1.9 million base salary) and jack-of-all-trades Danny Woodhead ($395,000 base salary) provide bang and scrappiness for the buck.

Penny-wise: Running back Matt Forte earned $470,000 in base salary; his 1,069 rushing yards were instrumental in the resurgent ground game that saved Chicago's season.

Sporting a total payroll in the bottom third of the league, the Panthers didn't exactly spend like drunken Congressmen. In fact, linebacker Jon Beason ($1.32 million base salary) and offensive lineman Ryan Kalil ($550,000 base salary) are probably underpaid. Problem is, Carolina failed to win -- demonstrating that while it's smart to be young and cheap, it's self-defeating to be too much of both. The Panthers entered the season with only four players 30 years of age or older on their roster -- two of them were the kicker and the punter. They ended the season with 29 first- or second-year players. Rookie quarterback Jimmy Clausen often looked overwhelmed. He wasn't alone.

Pound-foolish: The Panthers paid $12.7 million to quarterback Jake Delhomme … who played for Cleveland in 2010.

Like the Patriots, the Browns are willing to spend money; unlike New England, Cleveland has little to show for it. Cleveland whiffs in the draft -- see Quinn -- or fails to maximize and retain quality players, such as Braylon Edwards and Kamerion Wimbley. The Browns throw good free-agent and contract-extension money after bad: think the departed Corey Williams, or the injured Shaun Rogers and his $6.9 million base salary. The club also paid Delhomme a reported $7 million last season -- roughly $1 million for each of the seven interceptions the quarterback tossed in his four starts.

Pound-foolish: Besides Delhomme? Running back Mike Bell started one game, rushed for 99 yards on the season and earned a base salary of $1.45 million.

Remember when the Bills were the class of the AFC and went to four consecutive Super Bowls with future Hall of Famers Bruce Smith, Thurman Thomas and Jim Kelly? If so, you probably live in western New York. The Bills haven't made the playoffs in a decade, instead spinning on a hamster wheel of mediocrity. Like a flailing day trader, Buffalo seems to lack both an overall investment strategy -- hiring and firing coaches, shuffling front office decision-makers, going with youth movements while signing the likes of Terrell Owens and Shawne Merriman -- and the ability to hit on individual stocks (spending a 2010 first-round pick and a 2009 second-round pick, respectively, on sackless pass-rusher Aaron Maybin and already-cut James Hardy). Exhibit 1A? Quarterback Trent Edwards, whom the Bills named their 2010 Week 1 starter, then waived just three weeks later.

Pound-foolish: To compensate for Maybin's ineffectiveness, the Bills claimed injury-riddled former Pro Bowler Merriman off waivers midway through the season and picked up the linebacker's reported $1.7 million in remaining salary. In return, Merriman did not play a single down for Buffalo, which re-signed him to a two-year deal that guarantees $2.5 million in 2011.

Unbelievable: In a load-up-and-win-now season, the notoriously stingy Bengals spent less than the rebuilding Panthers. Believable: Cincinnati enjoyed only slightly better on-field results than Carolina. Long the NFL's poster child for getting even less than what you pay for, the Bengals simply don't invest enough resources into the boring off-field stuff -- that is, roster management and player scouting -- that allows clubs to maximize their dollars.

Rest of the NFL