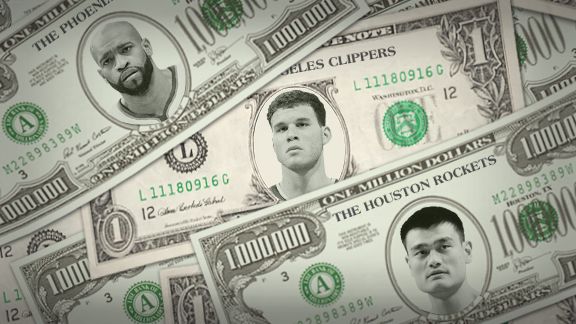 Today, we continue with the 2010-11 NBA season, with won-loss figures through Jan. 17 prorated for an 82-game season:

Let's start with a caveat: As well as they've played, the Spurs probably won't win 70 games, in part because attempting to do so would sap valuable energy from the club's subsequent playoff push. Nevertheless, it's hardly surprising that San Antonio is the league's most financially efficient team -- after all, the Spurs have been the gold standard of well-run NBA organizations for more than a decade, the league's answer to the New England Patriots. San Antonio's secret? Shop adeptly at Neiman Marcus and Wal-Mart, getting star-level production out of your high-priced veterans (Tim Duncan, Manu Ginobili and Tony Parker earn a total of $44.19 million) while finding and developing low-cost youngsters (guards Gary Neal and George Hill earn $1.38 million combined). Simple formula. Hard to execute.

Penny-wise: Former second-round draft pick DeJuan Blair has started every game and averages 6.8 rebounds in 20.9 minutes of playing time -- but will earn only $918,000 this season.

Last offseason, the up-and-coming Bulls cleared cap space to pursue marquee free agents LeBron James, Dwyane Wade and Chris Bosh. Chicago whiffed on all three -- and from a payroll efficiency standpoint, it might have been the best thing that could have happened to the club. After all, the Bulls' pre-existing core duo of third-year point guard/MVP candidate Derrick Rose ($5.55 million) and fourth-year center/defensive anchor Joakim Noah ($3.13 million) is both potent and affordable. Meanwhile, Chicago's post-"Decision" consolation prizes -- Carlos Boozer ($14.4 million) and Kyle Korver ($5.0 million) -- have been complementary and productive, making their market-rate salaries a wash.

The Thunder sit squarely in the NBA's payroll efficiency sweet spot: talented and experienced enough to win, but young enough to win without breaking the bank. To wit: Oklahoma City's starting lineup of Kevin Durant, Jeff Green, Russell Westbrook, Thabo Sefolosha and Nenad Krstic averages 24 years of age and $4.66 million in salary. In fact, if not for veteran backup forwards Nick Collison and Morris Peterson earning a combined (and rather staggering) $19.94 million for less statistical production than San Antonio's Blair, the Thunder would easily be No. 1 on this list.

By re-signing Wade and landing free agents Bosh and James -- perhaps you've heard the news? -- the Heat essentially have adopted a feudal model of wealth distribution. Sumptuous feasts for the lucky few. Table scraps for the rest. Accounting for 68 percent of Miami's payroll, the Big Three earn a collective $43.2 million; fortunately for the Heat, they also score 68 percent of the team's points (69.6 combined points per game). Fun fact: After the Wade/James/Bosh trio, Miami's next eight leading scorers earn $14.91 million combined -- slightly more than James and Bosh each earns on his own.

The antipodal Thunder, the Celtics have an aging core and the league's fifth-highest payroll. They're also the defending Eastern Conference champions and a good bet to return to the NBA Finals, proving that shopping for value and being cheap are not one and the same. Boston's starters -- Rajon Rondo, Kevin Garnett, Ray Allen, Paul Pierce and the injured Kendrick Perkins -- make a combined $56.44 million; as a unit, they're worth every penny, offensively efficient and defensively peerless.

Believe it or not, the Nets actually have a few bargains on their roster. Center Brook Lopez's 19 points per game are worth more than his $2.41 million salary; likewise, forward Kris Humphries' 9.4 rebounds per game make him a value proposition at $3.2 million. So what's the issue? New Jersey has too many middle-class players providing middling production, such as guard Jordan Farmar ($3.75 million) and forward Derrick Favors ($4.13 million). Worse still -- at least for fantasy purposes -- said players are cutting into each other's minutes, none more so than guards Anthony Morrow ($4 million) and Sasha Vujacic ($5.48 million), who provide duplicate long-range shooting effect.

The Raptors can't rebound (23rd in the NBA). They can't stop opponents on defense (26th in points allowed). What can they do? Spend money for scant return. With a payroll $10 million higher than Chicago -- and just $2 million lower than San Antonio -- Toronto is the Daddy Warbucks of the league's least financially efficient clubs, doling out a collective $17.18 million to three bench players (Leandro Barbosa, Reggie Evans and Linas Kleiza) who make $8.43 million more than the starters they back up. Oy.

Pound-foolish: Forward Amir Johnson is one of those aforementioned starters, and he earns $5 million for 9.3 points and 6.3 rebounds per game. Again: oy.

Befitting the arena they play in, the Cavs are like a home equity loan -- one that's gone into default. Cleveland mortgaged its future attempting to trick out its pad (LeBron James) with complementary bells and whistles: a Viking range here (Jamario Moon, $3 million), a remodeled master bath there (Daniel Gibson, $4.02 million), a high-tech home theater in the basement (Mo Williams, $9.3 million). Too bad James -- excuse us, the self-declared former "King" -- turned out to be a mobile home bound for South Beach.

Pound-foolish: When Cleveland traded for veteran forward Antawn Jamison last season, the club thought he would be the final piece in a championship puzzle; instead, his bloated $13.39 million contract is akin to a 12-car garage next to a backyard shooting range. Good luck selling that!

A little more than a year ago, the Wizards would have challenged -- and probably stomped -- the Nets for the league's least-efficient payroll title. High-priced vets such as Caron Butler, Brendan Haywood, Mike Miller and Jamison were injured and/or struggling; payroll albatross Gilbert Arenas was in legal hot water for bringing guns into the locker room; the team was, to put it mildly, a scalding hot mess. And now? Washington is still on the wrong side of the investment curve. But not quite as far. Center JaVale McGee ($1.6 million) and top draft pick John Wall ($5.14 million) embody the rebuilding Wizards: athletic and affordable but too raw, defensively porous and offensively limited to win many games.

Pound-foolish: The good news? Washington was able to foist Arenas ($17.73 million) upon Orlando. The bad news? The Wizards had to take Rashard Lewis ($19.57 million) in return.

The Kings are reminiscent of baseball's penny-pinching Pittsburgh Pirates: If they're serious about being competitive, it's awfully hard to tell. In putting together the NBA's lowest payroll -- take that, Minnesota Timberwolves! -- Sacramento has collected a group of players which earns little and produces even less. First-round draft picks Tyreke Evans ($3.88 million) and DeMarcus Cousins ($3.37 million) provide hope. It would be nicer if they provided victories.

Rest of the NBA

Payroll and salary information is from ESPN.com.