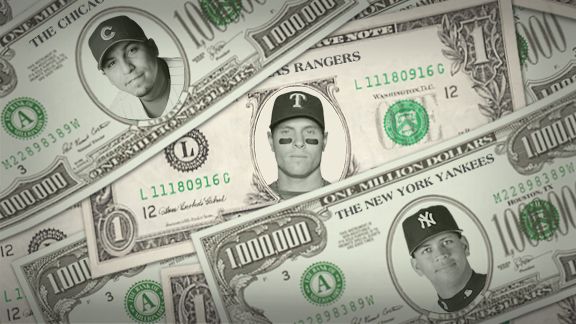 Below, we continue with the 2010 MLB season:

The bad news? The Padres blew a 6.5 game lead over the Giants to finish second in the NL West. The good news? Nobody expected San Diego to contend -- not with the second-lowest payroll in the majors. Enter baseball's great financial equalizer: good young pitchers who aren't yet eligible for arbitration. Behind staff ace Mat Latos, setup men Luke Gregerson and Mike Adams and closer Heath Bell, the Padres allowed just 3.6 runs per game, the fewest in MLB. Together, those four pitchers earned less than a third ($5.82 million) of what San Francisco's Barry Zito made ($18.5 million). Had anyone besides bargain slugger Adrian Gonzalez ($4.86 million) managed to hit -- San Diego's .689 OPS was fourth lowest in the majors -- the Padres might have made the playoffs. Alas, there are some things, such as offense, that money can buy.

Are the Pirates content to spend a pittance, lose in bunches and turn a tidy, revenue-sharing profit? Are they actually trying to field a competitive team on a reasonable budget, only they're really, really bad at doing so? What's certain is this: Following almost two decades of futility, Pittsburgh is getting bang for its buck only in the most relative, bottom-line sense. Is spending $613,000 per win truly a bargain when said victories involve watching Akinori Iwamura and Andy LaRoche flail at the plate? When none of the starting pitchers have an ERA below 4.00? When they arguably have one of the worst defensive teams in the majors? Perhaps that $613,000 is good money wasted. Perhaps the Pirates would be better off fielding an even cheaper squad loaded primarily with prospects.

Attention, Cleveland Cavaliers, Toronto Raptors and Denver Nuggets: If you're going to lose a star player, make sure you get something in return. Case in point? When the Rangers dealt slugger Mark Teixeira to the Braves in 2007, they received four prospects in return, including shortstop Elvis Andrus and pitcher Neftali Feliz. Andrus was the 2009 AL Rookie of the Year runner-up; Feliz won the award in 2010 and set a rookie record for saves (40). Better still, Andrus and Feliz earned a combined $820,420, making them par for the course on a bargain-studded roster that included reliever-turned-starting pitcher C.J. Wilson ($3.5 million), still-something-in-the-tank designated hitter Vladimir Guerrero ($5.5 million) and AL MVP Josh Hamilton ($3.25 million).

Penny-wise: Texas got 12 wins and a 3.72 ERA out of front-line pitcher Colby Lewis, who the Rangers re-imported from Japan for $1.75 million.

The A's are still playing Moneyball, but to what end? The widespread dissemination and acceptance of sabremetric analysis means Oakland no longer holds the same informational edge over competing clubs. Meanwhile, the A's remain a cash-strapped outfit that can't afford to pay market value for the power bats they desperately need. Oakland won with defense and young, affordable pitching; starters Dallas Braden, Gio Gonzalez and Trevor Cahill earned a combined $1.24 million yet led a staff that registered the third-lowest ERA in the majors. The A's lost, on the other hand, by failing to score. The club's offense was near the bottom of the AL with an average of 4.04 runs a game, and no Oakland hitter exceeded 15 homers.

Penny-wise: Braden pitched a perfect game while earning $420,000 in 2010 salary -- about $15.3 million less than Roy Halladay earned while performing the same feat and roughly half a million dollars less than Alabama resident Wade McGilberry earned for pitching a perfect game on "MLB 2K10."

Year after year, the Marlins prove adept at acquiring and developing affordable young players. Year after year, the club seems ambivalent -- if not downright hostile -- to spending enough money to consolidate its gains. Heading into 2010, Florida's bullpen was shaky. The Marlins skimped, then they suffered, finishing second in the majors in blown saves. A roster dotted with bargain buys, such as rookie Gaby Sanchez (401,000), finished a game below .500. Florida's cost-curbing seemed particularly curious in light of leaked financial documents that showed the team was earning a tidy profit because of revenue sharing. Are the Marlins trying to be a better version of the Pirates?

No surprise here. If the Yankees had won all 162 of their games -- statistically unlikely, no matter how overheated the tabloids get -- they still would have finished No. 23 on this list. Of course, the whole point of wearing pinstripes is that money doesn't matter (unless it's renegotiating with Derek Jeter). New York exists in an alternate financial universe, akin to Wall Street, where penny-pinching is for the other guys and consequences are for suckers. The Yankees can outbid themselves for superstar talent -- see Rodriguez, Alex, $33 million. They can outbid everyone else for a staff ace (C.C. Sabathia, $24.29 million). They can spend $5.5 million on the oft-injured Nick Johnson just because. The only things the Yankees can't accomplish with cash? Win the AL East. Or the World Series. At least not last season.

Enough with the mythology. The Cubs aren't crummy because of Steve Bartman or because the chortling baseball gods demand it or because of some long-dead goat. They're lousy because they're dumb. Consistently. Over the past decade, Chicago has spent more money than all but four other MLB clubs. The Cubs have three playoff appearances to show for it. Translation? Give the Cubs free cars, and they'll somehow come home from Oprah's studio with a handful of magic beans. Consider Chicago's 2010 roster: $18 million for one-dimensional Alfonso Soriano, $18.88 million for roller-coaster Carlos Zambrano, $14 million for he's-not-so-bad Kosuke Fukudome. Add those players up, and that's a cool $50.88 million in salary -- about $13 million more than San Diego paid for its entire team. In baseball circles, the technical term for this is fail.

Pound-foolish: Aramis Ramirez was better than his slow start -- batting below .200 in April and May -- but hardly worth his $16.75 million salary.

Rejoice, Red Sox Nation! You can once again complain that the big, bad, soulless Yankees outspent your plucky, loveable band of underdogs. Just don't acknowledge that Tampa Bay spent less than half of what Boston did ... and yet won seven more games. In the Red Sox's defense, injuries took a heavy toll, as pitchers Josh Beckett ($12.1 million) and Daisuke Matsuzaka ($8.33 million) combined for only 44 starts and lineup stalwarts Dustin Pedroia (a $3.75 million value) and Kevin Youkilis ($9.38 million) missed major time. More distressing was the performance of closer Jonathan Papelbon, who earned $9.35 million while blowing seven saves, losing six games and registering the highest ERA of his career.

Pound-foolish: With a salary of $18.7 million, John Lackey was Boston's highest-paid player. With a 4.40 ERA, he was hardly the Red Sox's best pitcher.

Throw around cash like the NL's answer to the Yankees, win games like ... the NL's Cubs. Actually, scratch that -- the Mets spent more than the Cubs over the past decade yet made the playoffs exactly once. Oof. Like the Cubs, the Mets' roster was a financial island of misfit toys: $20.14 million for injured ace Johan Santana; $19.4 million for unhappy Carlos Beltran; $8.63 million for concussed Jason Bay; $12.17 million for troubled closer Francisco Rodriguez. Oh, and don't forget $12 million for Oliver Perez, who went 0-5 with a 6.80 ERA. To put things another way: If former general manager Omar Minaya ran operations at Citibank instead of Citi Field, TARP would be broke.

The Tigers were 10 games over .500 at the All-Star break. They subsequently folded, in part because of injuries to Magglio Ordonez ($17.83 million), Carlos Guillen ($13 million) and Joel Zumaya (a $915,000 value), in part because high-priced pitcher Jeremy Bonderman ($12.5 million), designated hitter Johnny Damon ($8 million) and third baseman Brandon Inge ($6.6 million) provided little bang for the buck.

Pound-foolish: After designating Dontrelle Willis for assignment, Detroit traded the struggling pitcher to Arizona, reportedly agreeing to pay all but $263,000 of his $12 million salary.

Thanks to ESPN.com's David Schoenfield and Jim Caple for research assistance.