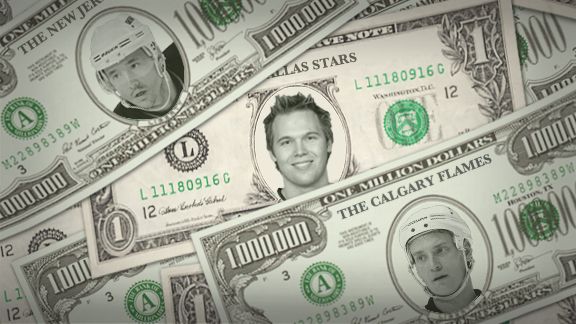 Below, we continue with the 2010-11 NHL season, using salary and payroll figures from the NHL Players' Association. Season point totals are projections based on records as of Jan. 17.

When the Stars offered newly acquired goalie Kari Lehtonen a three-year, $10.65 million contract extension last spring, it was the sort of gamble cost-conscious clubs often are more likely to take. A No. 2 overall draft pick by Atlanta in 2002, Lehtonen was talented but injury-prone, dogged by a bad back and questions regarding his conditioning and work ethic. The results? So far, so good. Thanks to solid play from Lehtonen ($2.7 million) and backup Andrew Raycroft ($700,000), the Stars have cut their goals against from 23rd in the NHL last season to 10th this season, a major reason the youthful club has overachieved.

Long removed from the big names and big payrolls of the late-1990s, the league's fourth-youngest team ought to be in full rebuilding mode. Instead, the Avalanche have overcome injuries and mediocre defense to hang around in the Western Conference playoff race -- in part because Paul Stastny ($6.6 million) and John-Michael Liles ($4.43 million) are playing up to their contracts; in part because veteran winger Milan Hejduk ($3 million) is out-producing his; in part because 20-year-old bargain Matt Duchene ($900,000) leads the high-scoring team in points.

Penny-wise: Duchene, in his second NHL season, is on pace to score 30-plus goals.

Atlanta's average annual payroll over the past five years ranked next to last in the league, according to Forbes.com. This season, GM-turned-president Don Waddell has managed to do more with less -- most notably by acquiring Blackhawks cap casualty Dustin Byfuglien, a Norris Trophy candidate earning just $3 million. Beyond Byfuglien, bargain buys Evander Kane ($900,000), Zach Bogosian ($875,000) and former eighth-round draft pick Tobias Enstrom ($3.5 million) have been instrumental in giving Atlanta's low-budget squad a fighting chance at a postseason berth.

Penny-wise: Atlanta's best move was the one the club failed to make -- signing Ilya Kovalchuk to a megabucks contract extension last season.

As was the case with the MLB-run Montreal Expos, the NHL-run Coyotes have as much chance of hitting the salary cap as putting a player on the dark side of moon. To wit: only one player (Ed Jovanovski) on the Coyotes' blue-collar roster earns more than $4.55 million, while 10 players earn less than $1 million. Nevertheless, general manager Don Maloney and 2010 Coach of the Year Dave Tippett have managed to make proverbial lemonade, finding bargains such as Lee Stempniak ($1.5 million), Ray Whitney ($3 million) and goalie Ilya Bryzgalov ($4.5 million), who the team claimed off waivers from Anaheim in 2007.

Penny-wise: Eric Staal is Carolina's highest-paid player at $7.5 million. Fortunately, he's also the team's best, tied for 10th in the league in scoring.

For years, the Devils were the New England Patriots of hockey -- jettisoning veteran players instead of overpaying them, shying away from big-money acquisitions, forging an identity based less on transcendent individual talent than a systemic style of play (the neutral zone trap). Of course, that was then. While the struggling Kovalchuk ($6 million salary; not in the NHL's top 40 in points or assists) is the biggest drag on New Jersey's financial efficiency, he's hardly alone. Eleven Devils earn $3 million or more; five earn more than $5 million; only four players have tallied more than 20 points for a team that ranks last in the league in goals per game. No wonder interim coach Jacques Lemaire told the Newark Star-Ledger that he won't be back next season, even if asked.

Pound-foolish: Offseason defensive acquisitions Henrik Tallinder and Anton Volchenkov earn a combined $7.5 million and have totaled 10 points and a -23 plus-minus rating between them.

The Senators believed that Pascal Leclaire ($4.8 million) would be their franchise goalie. They thought Alex Kovalev ($5 million) would recapture his long-lost prime. They assumed defenseman Sergei Gonchar ($5.5 million) would be just as productive as he was in Pittsburgh. In all three cases: oof. Ottawa can blame some of its misfortune on the health woes of Jason Spezza ($8 million); for the most part, however, the Senators' inefficiency stems from bad decisions. After all, a $60.32 million payroll ought to produce more than one All-Star (Erik Karlsson).

The Oilers don't spend much. They don't win much, either. In one sense, those two things are related. Unlike Colorado, Edmonton's youth movement isn't quite ready for prime time, as the club is last in the league in goals allowed and was sending rookie Jordan Eberle to the All-Star ... skills competition. (He withdrew because of an ankle injury.) In some cases, payroll parsimony isn't the problem: veterans Tom Gilbert ($5.5 million), Shawn Horcoff ($6.5 million) and Nikolai Khabibulin ($3.75 million) make plenty of money. They simply aren't producing enough.

Pound-foolish: At some point, Khabibulin may have to serve a 30-day jail sentence for a 2010 drunk-driving conviction in Arizona.

Sixty-five million dollars. Zero All-Stars. Blame for Calgary's overpriced, underperforming roster rests with former general manager Darryl Sutter, who was forced to step aside in late December. Among his missteps: Matt Stajan ($4.5 million) and Jay Bouwmeester ($6.6 million). Then there's Olli Jokinen ($3 million), whose saving financial grace -- and we use the term loosely -- is that he's not as overpaid as the last time he played for Calgary.

Pound-foolish: With a salary of $7 million, once-elite Miikka Kiprusoff is the sixth-highest paid goaltender in the league; he ranks No. 31 in save percentage. Do the math.

Glass half-full: $5.4 million acquisition Phil Kessel made the All-Star team. Glass-half empty: He cost the Leafs two first-round picks in a trade with Boston. A team in transition, the Leafs have money. They need value. Goaltender Jean-Sebastien Giguere hasn't played up to his $6 million salary, nor has defenseman Francois Beauchemin ($3.55 million).

Pound-foolish: Paying defenseman Mike Komisarek $5.5 million is like shopping at the one Oriental rug store that isn't having a perpetual clearance sale.

Rest of the NHL

Thanks to ESPN.com's Scott Burnside, Thomas Neumann and DJ Gallo for contributing to this report.