Bang for the Buck: College football 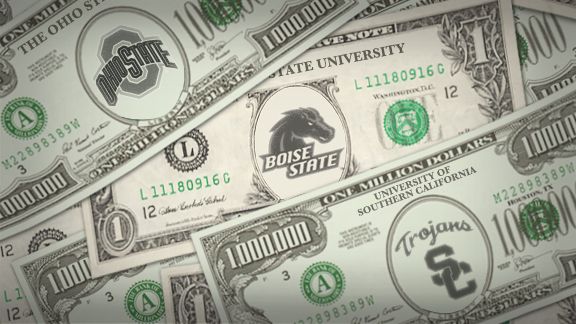 Below, Page 2 concludes its series by looking at the final pre-bowl Top 25 college football teams. We used the most recent athletic department budget information provided by the Department of Education's online Equity in Athletics Data Analysis Cutting Tool to analyze the 2009 season.

Fun fact: Utes' budget is lower than all but one school (Washington State) in the Pac-10, the league Utah soon will be joining.

Fun fact: The Buckeyes' $32.85 million football profit was major reason the school's athletic department was slightly in the black despite $104.93 million in total expenses and a $17.81 million capital debt payment.

Fun fact: LSU's $43.25 million football profit was bigger than Ohio State's and could have funded the top four teams on this list ... with $4.59 million to spare.

Fun fact: Alabama took in a staggering $71.88 million in football revenue; the school's $40.76 million football profit was greater than the reported operating income of 24 NFL teams.