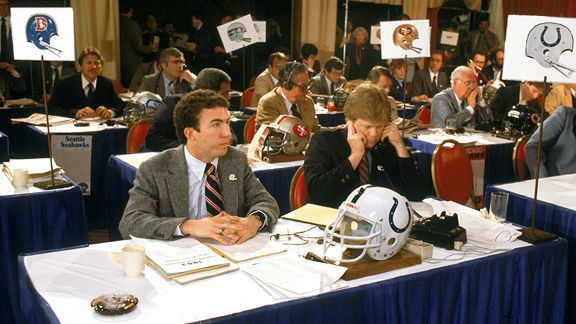 Chuck Solomon/Getty ImagesThe NFL draft and its vocabulary have grown exponentially over the years. Page 2 helps you keep up.

Bright lights. Big stage. Utter befuddlement. The NFL draft is easy to understand -- it's just like fantasy football, except not -- right up the point when the analysts begin to open their mouths.

How to make sense of the rapid-fire scouting jargon? The feverish football insider talk? How to distinguish a prospect who is "tight in the hips" from one who simply "carries his pads"?

(Equally important question: How to read the last sentence aloud without giggling like an innuendo-loving eighth-grader?)

Not to worry. Page 2 is here to help. Two years ago, our colleagues at ESPN The Magazine published a guide to Mel Kiper's mother tongue. Thing is, their list seemed incomplete. A bit lacking in perspective, at least to anyone who doesn't notice and/or immediately post a Twitpic screencap when Todd McShay gets a new haircut.

To fill in the gaps, we humbly present our own revised and expanded NFL draft glossary. Enlightenment lies below.

Active hands: Desirable trait for defensive players when they're not in strip clubs.

Bench press: Vital measure of physical strength while flat on one's back.

Best player left on the board: Used by teams to describe selected players they didn't actually want.

Big board: State of mind associated with Rounds 5-7.

Breakaway speed: Rate at which airborne plates shatter upon contact with a thrown football.

Broad jump: Physical activity yet to be attempted in a professional football game.

Can't miss: A prospect who likely will cover punts.

Carries his pads: An activity most prospects may as well engage in while standing on sideline during initial professional season.

Character: The quality of not currently being incarcerated and/or on probation.

Coaches: Impotent, incompetent, ineffectual excuses for humanity who ought to be held more accountable when any one of the nascent football godlings touted by mock draft experts fails to directly enter the Hall of Fame.

Cover corner: A defensive back who is unable to tackle.

Draft grade: Numerical or letter-based evaluation of performance that has yet to occur.

Draft stock: Measure of value that is crucial at all times excluding moment of sale.

Edge rusher: A defensive line prospect too small to tackle anyone.

Elite: A prospect who definitely will be covering punts.

40-yard dash: (1) an activity that never takes place in professional football games; (2) the supreme measure of human worth.

Football IQ: The ability to consistently distinguish white jerseys from colored ones.

Franchise quarterback: A prospect who will be managing a Burger King restaurant in five years.

Hand punch: Describes a football move in which an offensive line prospect uses his hands to physically strike an opponent. Not to be confused with foot kick.

Honesty: Character trait valued in prospects, but not in their college coaches.

Intangibles: Attributes that cannot be discerned by having prospects run semicircles around traffic cones.

Intriguing: A prospect who may or may not be good enough to cover punts.

Love: Intense, public, pre-draft emotional state experienced by team executives and decision-makers toward players they have no intention of selecting.

Maxed out: A prospect who already can play football, and is therefore undesirable.

Mr. Irrelevant: A prospect so utterly inconsequential he is feted with media coverage and his own parade.

Motor: Quality possessed by a prospect projected to give maximum effort while covering punts.

Move tight end: Standard physician's advice for patients who have remained seated and stationary through the entire NFL draft.

Off-the-field concerns: Not applicable to anyone who has read through an entire seven-round mock draft.

On an island: Status of one's significant other during NFL draft.

On the clock: Term not applicable to the Minnesota Vikings.

Playmaker: A prospect with the ability to force a fumble in punt coverage.

Position of need: Any position for which a team has already selected elite, can't-miss and intriguing prospects in previous drafts.

Possession receiver: A receiving prospect who is too slow to get open.

Potential: The quality of not sucking yet.

Pure corner: A cornerback prospect who has been treated with a reverse osmosis system.

Red flag: Term of caution; does not apply to scoring less than Nate Robinson's shoe size on the Wonderlic exam.

Run-stuffer: A defensive line prospect too fat to sack quarterbacks.

Scouting combine: The only reason in the world to visit Indianapolis in February.

Sleeper: A prospect touted as little-known or under-the-radar by dozens of media outlets.

Sure thing: Describes the likelihood of a full-time NFL Draft Network at some point in the near future.

System quarterback: A quarterback prospect whose success is the result of mastering the intricacies of a patterned, structured offense -- something that has no equivalent in professional football.

Thin through the hips: Describes a prospect lacking access to anabolic steroids.

Tight in the hips: Describes a prospect with little chance of future success on "Dancing With the Stars."

Trading down: Process by which teams coalesce fan anger and disappointment around many players as opposed to just one.

Trading up: Same process as trading down, but in reverse.

Tremendous upside: Quality cited when justifying selection of prospect who has yet to demonstrate football-playing ability.

Triangle numbers: A prospect's height, weight and 40-yard dash time; not to be confused with actual football statistics.

Tweener: Describes a prospect: (1) not big enough to play line; (2) not fast enough to drop back in coverage; (3) just good enough to get defensive coordinators fired.

Undrafted: Describes a prospect with no hope of playing professional football, as well as James Harrison, Antonio Gates and Kurt Warner.

Upside: Quality of being able to cover punts at an indeterminate point in the future.

Upright runner: A prospect whose locomotion takes place on two limbs instead of four.

Value: Does not apply to personal time spent watching the second day of the NFL draft.

Value pick: Describes a prospect whose draft position and lack of ability correspond.

Versatility: Describes a prospect who can block and make tackles on punt coverage.

Vertical threat: Describes a prospect who can quickly reach a distant point on the horizon.

Wingspan: Measure of how many women an intoxicated prospect can fit under his arms in a Facebook or tweeted photo.

Work in space: What drafted prospects may as well do barring resolution of the current NFL labor-management dispute.

Wonderlic score: Measure of ability to sharpen a No. 2 pencil.