They call it resilience; we call it something else.

The Houston Rockets weren't supposed to reach this stage. Weren't supposed to see a Game 6 against the Lakers. With a roster looking more like the set of "Nurse Jackie," they've found a way to do something practically no one thought was possible. 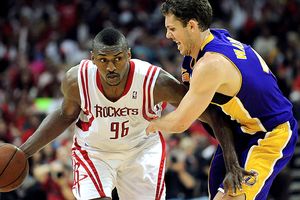 Ronald Martinez/Getty ImagesRon Artest and the Rockets shocked the sports world by beating the Lakers in Game 4.

I'm not talking about winning Game 4 -- anyone who knows these Rockets well knows they believed they could win. But discovering who they really were as a squad? That came out of nowhere.

Shane Battier kept referring to the Rockets' 12-point win in Game 4 as a testament to the resiliency of this team.

Honestly, he was selling his team short.

The Rockets searched for an identity in Tracy McGrady. Then they searched for one in Yao Ming. They found none. And it wasn't their fault because that's the M.O. of sports: Find yourself in your star players. The Rockets -- like all teams -- were conditioned to do this. But just like when peeling an onion, you have to dig through several layers to get to the core of a team. And those layers can make you cry.

But then it happened.

Ironically, it happened via injury. When team trainer Keith Jones forced Yao to reluctantly come off the court at the end of Game 3, only to find out later that the foot he was playing on during the entire fourth quarter was broken, the Houston Rockets finally experienced their epiphany. 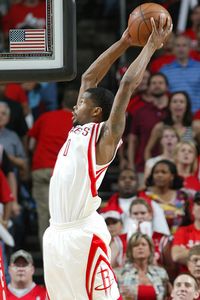 Bill Baptist/NBAE/Getty ImagesAaron Brooks is just one of the role players who has stepped up big for Houston.

Now, everyone knew the Lakers would bounce back and beat the Rockets handily in Game 5. That was as inevitable as Michael Vick's getting a reality show. But by then it was too late. The Lakers were exposed as being inconsistent. And the Rockets … well, they've finally figured out who they are and what they're made of.

Two stars down, the old Rockets would have called it in, gone through the motions, left themselves for dead. They would have conceded -- in their minds, without T-Mac and Yao, they would have given themselves only a Mine That Bird chance of winning.

But that was before anyone ever heard of Mine That Bird -- and before Ron Artest's arrival and Rafer Alston's departure. Until those last two things happened, the Rockets never knew who the team staring at them in the mirror was.

Now, in that mirror, they see a sense of pride, a sense of purpose. They see what everyone else was overlooking or failed to notice. They see self-regard, self-respect. They've found amour propre.

Aaron Brooks refused to die. Luis Scola refused to die. Battier refused to die. Chuck Hayes, Von Wafer, Kyle Lowry … all refused to die. No All-Star Games between them, no votes for MVP, no regular visits to the postgame podium. This is something we haven't seen before, not in a post-Hakeem Olajuwon Rockets team: a group of nonsuperstar players not willing to die when they have no reason to live.

To the outside world, once Yao went down, there was no reason for the Rockets to compete or prolong the inevitable. "You will never beat the Lakers now!" The Rockets' players heard it, too. And even if that's still the widely held belief heading into Game 6 Thursday, that Game 4 performance was the true measure of this Houston team. The Rockets had a built-in excuse to fold, and no one would have blamed them. They had every reason to think God was just continuing this sick joke on them and everyone knew the punch line.

They could have gone out as Dallas did. 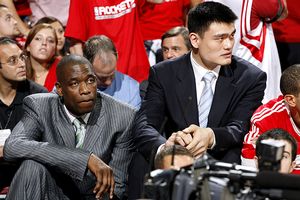 Bill Baptist/NBAE/Getty ImagesThe Rockets' injuries this season may have been a gift in disguise.

But instead, they manned up better than any other team has during these NBA playoffs. And even off the heels of a 40-point beatdown in Game 5, the Rockets will walk away from this season knowing that talent and superstars are secondary to what this team is and will be about. That will make them extremely difficult to beat once the superstars return. Because the superstars, too, have seen the true character of this team.

Although we all thought the key ingredients to the Rockets were Yao and Tracy and Rafer and staying healthy, it turns out the key ingredient was an untapped sense of pride, which never would have been discovered had almost everything not been taken away from them. And even if Game 6 against the Lakers is their last game of the season, the Rockets will walk off the court knowing that whatever they set out to accomplish at the beginning of this season -- when a championship was their legitimate and realistic goal -- they surpassed that.

Win or lose, the Rockets have proven what needed to be proven. To us. To themselves.

As I said, they call it resilience. But really, it's something much, much deeper than that.