Bolt lives in a cloud of suspicion 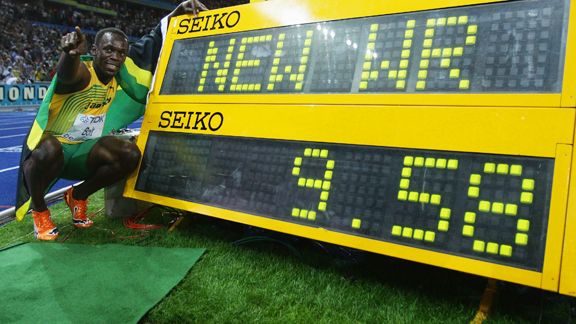 Mark Dadswell/Getty ImagesThe latest records by Usain Bolt left Scoop Jackson with joy in his heart and fear in his mind.

Ever had one of those feelings you can't shake?

You know, one that haunts you. One that makes your heart beat faster, causing mini-anxiety attacks, in which you can feel yourself no longer breathing normally because of the apprehension that's been built up inside of you.

Like waiting for the news to come back from the doctor on whether or not what you have is terminal. Or that feeling of knowing one day your spouse is going to find out you've been unfaithful. Or knowing that one day the men wearing windbreakers (DEA, FBI, CIA, etc.) are going to come knocking at your door and it's all over.

When he crossed the line and that 9.58 flashed on my screen, I had that feeling. (I had it again when he shattered his world record in the 200 meters on Thursday, running 19.19.) It was as if my body came to life and experienced death at the very same moment. You see, I love Usain Bolt. Love him the same way Boston loves Papi and Cleveland loves LeBron; the same way Skip Bayless loves Oklahoma and the media loves Parcells. It's almost unconditional; it's unapologetic, it's real. It's to the point where that person can do no wrong. And there's nothing wrong with it.

For it, we don't apologize.

But with that kind of love comes fear. With Bolt's kind of greatness, fear follows. Fear that one day the bottom is going to fall out. After seeing him doing something no one ever thought would be humanly possible to do: be more awe-inspiring than he was in Beijing. I hope the day never comes that we find out what we just witnessed was not true.

Usain Bolt has never failed a drug test, never been suspected of being anything but abnormal in the most honorable and respected way. But still, there's that small part of me that can't stop myself from thinking what the reality might be.

To any of us who say or believe that we've been totally desensitized by the use of PEDs and that we don't care anymore who uses them, we're lying. Because the one thing athletes do to all of us is make us feel for them. There's something that brings us to them in ways that don't necessarily happen with artists, actors, musicians, writers, etc. While we live to hear so-and-so's next song, or we can't wait for so-and-so's next film or will stand in line to buy so-and-so's next book, we pull for athletes. And that eventually pulls us deeper into who they are and what they do. And when someone comes along who can make you feel the way Usain Bolt has made many feel over the past year, we can't help hoping that one week or 10 years down the line his name is not associated with anything fraudulent.

We live in a culture of suspicion. This leads us to those thoughts we can't control. Even when blinded by faith and fact, the culture we live in and what we've been exposed to in the past has us -- even in moments of great happiness -- skeptical. Living in a cerebral fear that someone has evidence that will take our hope and crush it to a depth only reserved for life-changing moments.

Even with all of the beliefs of "naturality" (from Michael Phelps' records to Ray Lewis' sacks to Tiger's wins to Lance's Tours), everything is suspect. And more damaging than the realistic negative prism we have to look through, it's the feeling of doubt we can't escape that's actually worse to live with. There are certain names in sports we don't ever want to believe are tainted, certain athletes we never want to find out have any type of association with anything synthetic. Pujols, Woods, Phelps, LeBron, Serena. The Manny and Papi findings stung. The Marion Jones unveiling hurt. People will say they hate Barry Bonds and that all evidence is pointing against him, but truth be told, if the evidence ever comes up concrete and irrefutable, there will be some cloud of sadness that will hover over that final discovery.

All those names considered, nothing would hurt more than damning evidence on Bolt. Even if it comes years after he's retired, after he shatters his own world records in the 2012 Olympics. There have been five sprinters from Jamaica (two from the team he trains with) who have tested positive for methylhexaneamine (a substance that is not on the 2009 World Anti-Doping Agency list of banned substances, but is on the 2010 list). Which makes matters of suspicion more difficult to ignore. A man shaved 0.11 seconds off a world record he set less than a year ago, and before that it took 39 years to shave 0.21 seconds off the record. It's like no one had ever hit over 61 home runs in the history of baseball in a single season, and then all of a sudden three men do it six times in a span of four years.

Still, I have those feelings. Have you? Ever been happy and scared at the exact same time? Ever had that dual feeling of conflict and concern run through your body and soul to the point that you have no concept of how to feel? You know that feeling that comes after watching a man do something possibly greater than any single feat in any single sport, with an ease that leads you to know in your heart he's so great that if he wanted he could actually run faster? Make you forget what you just saw?

Ever been just waiting for someone to tell you that one of the greatest things you've ever seen in your life never really happened?

Ever had that feeling?

Yeah, I think you have.