What if Brett Favre were a woman?

If he were a woman …

He'd be dumped by now. Straight dismissed. Labeled an indecisive diva. A supermodel with issues.

If he were a woman there would be no way we'd love him like we do Charlize Theron or Sanaa Lathan. It'd be more like the love we have for Liz Taylor, Drew Barrymore or Madonna. Serial love.

If he were a woman, he'd be one glourious basterd. He'd create collateral damage that would take years for men (in reality, teams) to recover from. He'd leave them vowing to never mess with another "woman" like that again. 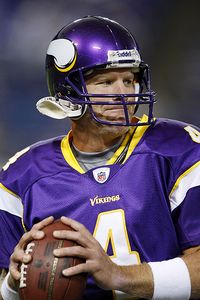 Bruce Kluckhohn/US PresswireMaybe the biggest diva in the NFL isn't a wide receiver after all.

If he were a woman, he wouldn't be able to get away with this and still be respected, because this is not the behavior of respectable ladies. Bouncing around from man to man -- excuse me, team to team. They have names for women like that.

So I ask: If Brett Favre were a woman … would you date her?

There are too many suitcases, too much luggage. Excessive baggage, albeit Vuitton.

He's high-maintenance in its highest form. He's a high-priced call guy. Julia Roberts played that role and became a star.

But in Favre, you wouldn't find any of the things you'd look for in a serious relationship. Not the redeeming social qualities. Not the respect for others (or the game). Not the "I'ma introduce you to my moms and keep you away from my friends" type of stuff.

He's about him, and for him there's nothing wrong with that. Because what has to be taken into consideration is that we've allowed this to happen. We've allowed Favre to become who he's become.

But being special allows this behavior to manifest. It's no different than the perks that come with being extremely attractive or filthy rich. With being Paris Hilton.

If he were a woman … you'd want him to be slicker about it. More conniving, more deceiving. Crafty like a Beastie girl. Not so up-front about who she is. You'd want her to have some pride in herself. Not be so eager to present herself as promiscuous. The waffling and indecision. The pathological inability to stay true to her word. The vanity of knowing -- and acting and believing -- that the world revolves around her.

Now, we've all met women like this. They can be the most beautiful female this side of Samantha Buxton, but we will still think three times or come to the irreversible conclusion that dating someone like her isn't worth it. The headaches, the attitudes, the "it's my prerogative to change my mind any damn time I want" philosophy, the prima donna behavior that overrides the benefits of being seen with her.

Take the story of Aphrodite, the Greek goddess of ungodly beauty that rendered her irresistible to gods and mortals. She was married off to Hephaestus by Zeus, only to have an affair with Ares. Once the affair was exposed (Ares and Aphrodite were caught naked in a trap laid by Hephaestus) gods such as Apollo and Hermes claimed that they wouldn't have any problem being caught in a trap with such a beautiful goddess. Then Poseidon expressed interest. Then Dionysus. She'd eventually sleep with all of them. Then Zeus, after being tempted by Aphrodite, punished her for being a freakazoid by making her fall in love with Anchises, the mortal Trojan prince. They ended up having a child, Aeneas. Then Adonis, the handsome young boy toy of gods, came along. With him, Aphrodite gave the first-ever meaning to the term "cougar."

Now, who among us would date Aphrodite? Or better yet, Pamela Anderson Lee? Not go on a date. I'm talking "date" with intentions of building a serious and substantial relationship. Thank goodness Favre is one of the greatest players in NFL history. Because if he were that woman, we'd be left to answer the one unasked question in Greek mythology of the men who "dated" Aphrodite: Was it worth it?