San Francisco Giants pitcher Randy Johnson is the newest member of the 300-win club. In a recent interview, he talks about hanging with Eddie Vedder when they were both starting out, killing a bird with a pitch, career longevity, how he's mellowed with age and whether he might have been better off being a knife thrower.

Here are 10 burning questions for Johnson, as posed by Page 2's Jim Caple:

1. Eddie Vedder was in Seattle recently for one of your starts, as were others from Pearl Jam and Soundgarden. How did you get to know those guys? 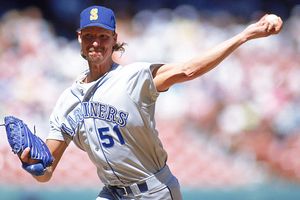 Randy Johnson: My first year here was 1989, so that was the beginning of the grunge movement, as it was labeled, with all the underground bands making their mark on Seattle. Whether it was Pearl Jam or Soundgarden or Tad Doyle in the band TAD, Mudhoney -- a lot of those bands really put Seattle on the map, along with Microsoft and Starbucks. A lot of those musicians are really into sports, and I'm really into music, so it was a great mix. I was starting off at a great time in Seattle when these bands were starting off. I was going to see them play their shows, and they came to some baseball games and it meshed. We met, and I got to know some of the guys. I've known those guys for 20-some years now. We still stay in touch; in fact, as you said, they were at the game last night and I'm hooking up with them after the game tonight to go see a show. I feel very fortunate to not only have played the game at the right time here in Seattle but also to have met a lot of very interesting people here that I can call friends. It was a great time in Seattle. Along with all the great stuff happening on the field there was a lot of things off the field that were just as interesting. I'm very fortunate to have been part of that.

Did you see them at the Crocodile and places like that?

I saw them at the Off Ramp and the Paramount and little places like that. I was just there when they were playing small little clubs and was there with Soundgarden when they were playing Days on the Green with Metallica and big bands like that. We have stuff in common. They travel the world, but there are similar parallels. You travel and you have a fan base and it's pretty cool.

2. Satchel Paige was famous for giving his six rules for a long life, including "Don't look back, something might be gaining on you" and "Avoid running at all times." You'll be 46 in September. What would your rules for a long career be?

Have two functioning ears, and by that I mean, listen to other people and learn. Work hard. And have patience. Because no matter who you are, you're going to get hurt in your career and you have to be patient to get through the injuries.

3. What superpower would you most like to have: the ability to fly, turn invisible or the strength of 100 men?

I'd probably say the strength of 100 men.

That's interesting. I've asked this question for years and for a while, almost everybody I asked said ability to fly or turn invisible. No one picked strength. And now three out of the last four people have picked strength.

I would think flying would be pretty cool. You would be able to fly away from all your enemies and get where you're going much faster. But being invisible? You probably wouldn't use that for the good of man. You know? It's like the Invisible Man -- he used it for bad. But the strength of 100 men, you could use that to your advantage in your profession but you could also do good for men. If strength was needed for moving things for people, you could do it. I suppose all three would come in handy, but I would go with strength.

If someone was trapped under a car, you would be the go-to guy.

4. You're holding a dinner and you can invite any three people alive or from history. Who are they?

I'd say probably Babe Ruth from the baseball and sports realm. Maybe Abraham Lincoln and … hmmmm. Maybe Martin Luther King Jr. Just to understand the adversity he went through and be able to comprehend that.

What would you serve? 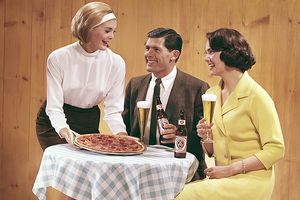 Tom Kelley/Getty ImagesPizza and beer is almost always a good idea, no matter the company.

5. What's a recurring anxiety dream that you have?

I don't have those kinds of dreams -- that's my reality. When I'm out there on the mound performing, if you don't have some form of anxiety, some nervous energy, I don't think everything is there then. I think that's an intangible you have to have to be successful. Because you can feed off that nervous energy. You can draw from that, and every time you go out there with a bit of nervous energy, it diminishes as you gain control of the situation. But initially, you don't know how things will go. Tiger Woods, Larry Bird, Wayne Gretzky, a pitcher just before a game, I would imagine they all have nervous energy. But as you perform, the nervous energy dissipates and you start to relax and you start to do what you do best. But you have to have that intangible to be successful. People who say they're not nervous -- I would be kind of curious to see how successful you are at what you do and how long you've done it. And what is success in your eyes? Have you separated yourself from everyone else in that craft? Or have you settled amongst the pack?

There was no fallout. I didn't think it was a big deal or not a big deal. It's just something that you don't see very often. … Some people thought it was pretty fascinating, to the point they tried to recreate it on these science channels.

Did they talk about what the odds were of that happening?

Yeah, they tried to re-enact it, asking, "With a bird flying so fast" and the science behind it and all that. But I never really thought much about it. There were too many other things that have gone on in my life that I've found more interesting.

7. If you weren't a baseball player, what would you like to have done?

That's a good question. I never gave it a whole lot of thought because I was always playing baseball. I don't know if I would have been good enough in any other sport. I played basketball and had a scholarship to play basketball, but I don't think I was going to be the next Larry Bird. That's tough, because I've really done nothing out of baseball. I've had other interests, but I'm not sure what it would have been to support a family.

You have an interest in photography, right?

There's that great old Mariners commercial which asked, "What if Randy Johnson had gone into a different career?" And they show you as a knife thrower tossing knives at a woman on a spinning wheel. 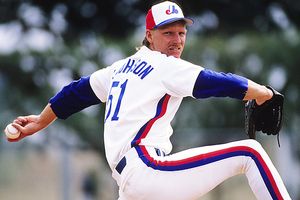 Oh, Rando Grando! I still have that on videotape. That was pretty cool. All those old commercials for selling season tickets -- it wouldn't be surprising to hear that the Seattle Mariners started those kind of commercials because you see all sorts of other teams doing that sort of comedy skit thing to create interest in the product. The Mariners were doing that back in 1993, and they were very creative and innovative, and I've seen that continue on with other teams.

Did you do the Mr. Snappy commercial with the Mariners or ESPN?

ESPN. I'm not even sure what that was. I'm not sure how that evolved. It wasn't me calling my slider that, it was someone at ESPN calling it that and then they did a commercial.

And the other people started calling your slider Mr. Snappy?

Yeah, it's not like I named my pitches. Much like the Big Unit. That was a nickname that kind of stuck.

Does anyone actually call you Big Unit, like, "Want to go out for dinner, Big Unit?"

No, it's Randy. I would just as soon be called by my name.

9. Nolan Ryan had a huge impact on your career, particularly a lesson he gave you in 1992. Where would you be if you hadn't talked with him?

It's hard to say. It was one small thing that he and (former pitching coach Tom House) told me, but like they also told me, it was up to me to actually go out there and do it. I can tell people things in this clubhouse, too, but if they don't listen or take advantage of what I'm saying, it's only as good as the person trying to apply it. Over the years there have been a lot of others very influential with my career, but more importantly than what they said, I had to go out and do it.

10. Before the game, you spent about 20 minutes talking and laughing with Mariners broadcasters Dave Niehaus and Rick Rizzs. That never would have happened in the old days. What's the difference?

The years have really flown by pretty fast, and I really haven't enjoyed it as much as I probably could have or should have, so I want to enjoy things a little more this year. We're already a third of the way through the year, and it's flying by quickly, and the next thing you know it will be the end of the year. So I've had a lot of family and friends visit, and I try not to get very far ahead of myself.