Leave the scowl at home, Kobe

The strangest moment of the NBA playoffs took place during Game 3 of the Lakers-Rockets series, when Kobe Bryant hit an 18-foot turnaround jumper from the left elbow with Shane Battier's right hand in his face. Bryant immediately began shaking his head with a look that indicated he smelled something really bad. This -- as you know -- is Kobe's dismissive face, the one he now makes after nearly every basket.

But that wasn't the strange part -- after all, how can something be strange when it happens anywhere from 10 to 25 times a game? The strange part came afterward, when he started back downcourt and turned to the TNT broadcasters at center court and yelled toward commentator Doug Collins. 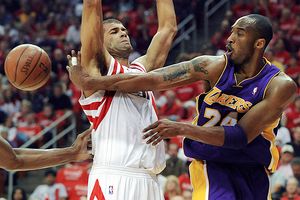 Ronald Martinez/Getty ImagesWe get it Kobe, no one can guard you. Now keep quiet and play the game.

There was a pause on the broadcast. OK, that was meant for us, you could almost hear them thinking. So ... what do we say now? They couldn't ignore it, because it was clear to everyone watching that they were taken aback and that Kobe was the reason. Kevin Harlan acknowledged that Kobe was targeting Collins, one of the most even and knowledgeable minds in the game. When Harlan asked his partner what it was all about, Collins sounded genuinely perplexed. "I'm not sure," he said, and they quickly and quietly moved on.

And that's the deal about Kobe: None of us is sure. How can a guy with that much talent play with such little joy? Why does he feel he has to put on that phony tough-guy show all the time? Underneath all that pre-fab armor, who is he? Does he even know?

It's sad, maybe, but Kobe will never be appreciated in a manner commensurate with his ability. He's in the process of turning himself into an antihero. (In many respects, he is similar to Alex Rodriguez, another tin-eared superstar.) Everything he does reeks of insecurity, which is a really weird trait for a guy who -- along with LeBron James -- is a once-a-decade basketball talent.

Unlike LeBron, though, Kobe can't let his game speak for him. He has to accentuate everything with the facial expressions and the dismissiveness. It's not enough for him to beat someone; he feels compelled to belittle that person in the process. That's why one of the best things about the Lakers-Rockets series -- and, really, it's turning into a 700-page novel -- has been Shane Battier's reaction to Kobe's antics. And that reaction is this: zero. None. He acts as though he can't hear or see any of it.

Hey, Kobe, we know you're great. You know you're great. Shane Battier knows you're great. How about letting someone else say it first every once in a while? The way it works now, you're telling us so often that we're getting tired of it. Let us be the judge of whether someone can or cannot guard you. It's pretty self-explanatory, to Doug Collins and everybody else.

You see, I want to be able to enjoy Kobe's talent. I want to see it the way I see LeBron's: transcendent, mostly pure and emanating outward. It probably will never happen, though. Kobe won't let it.

For a guy with such a constant flow of creativity running through his game, it's amazing to see how calculated he is about his image. He comes across as though he's reading a script, and he's all wrong for the part (maybe Alan Alda reading a part meant for Harvey Keitel). There are just too many false notes, and the worst part is, he actually seems to believe this is what people want from him. This is the persona he has cultivated, and he's going with it no matter what. It's really kind of sad.

And this is where Kobe veers from the arrogant antihero routine perfected by someone such as Barry Bonds. Bonds didn't care what you thought about him. He thrived off the anger he generated. But this preening, jaw-jutting, head-shaking character is what Kobe believes people want.

Maybe it's his attempt to answer the questions of the Lakers' toughness. I don't know, but in the playoffs, his performances generally follow one of two themes: (1) He takes over the game and taunts everybody in sight, demanding that all acknowledge his greatness or (2) he steps back and intentionally doesn't take over a game, in which case his attitude seems to be, "See what they look like without me?" Either way, it's a tough act to embrace.

In the wake of Sunday's Game 4 disaster, when Battier and Ron Artest did guard Kobe -- and after which Magic Johnson said the Lakers defiled the team's honor -- it's a good bet Kobe will be at his contrived best in Tuesday night's Game 5. He'll probably dominate, and he'll undoubtedly let us know.

But here's a radical idea: Stop with the smugness and the arrogance. Play your game and let your talent speak for itself. You might not know this, but it does a much better job than you do. And if you're not going to enjoy what you bring to the court, at least give us half a chance.