A valid claim of disrespect

The idea of professional athletes gaining motivation from the perceived disrespect of outside forces has always struck me as curious, especially when the disrespect originates from people the athletes themselves don't necessarily respect: the media and fans. If you feel someone doesn't know what they're talking about to begin with, why is it so important to prove them wrong? 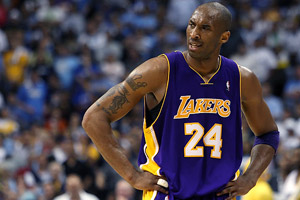 Jed Jacobsohn/Getty Images"How dare you stand in the way of my preordained run to the Finals?"

It has become such a staple of the sports landscape that most of us don't pay attention to it anymore. Unless someone says something utterly ridiculous -- which happens often enough -- we ignore it. It's the white noise of the playoff season in every sport.

However, in the biggest upset since Mavs-Warriors, the NBA playoffs have provided an exception to the rule. I completely understand how the Magic and Nuggets can draw motivation from the way the media has force-fed the supposed dream Finals matchup between LeBron and Kobe (and, to a far lesser extent, Cavs-Lakers).

Put yourself in the uniform of one of the alleged underdogs. Read what people are writing. Listen to what they are saying. Through that lens, you will see that these aren't merely predictions. They aren't writing and saying that you can't win. They're writing and saying that you shouldn't win. They're telling you the league, the networks and the public would be better served by having Kobe and LeBron play in the Finals.

From Nike's puppets to Vitaminwater's insistence on "a collision course," the world is telling you that it would be better for everybody if you lost and politely went away. (In the conference room of an ad agency somewhere, you can bet they're discussing a contingency Nike ad campaign for the Finals starring Puppet LeBron and Puppet Kobe watching from a couch.)

If you play for the Nuggets or Magic, you don't accept those sentiments and images as simply someone's opinion. This is far more cutting. It's not a referendum on your ability; it's a referendum on your worth. People are saying they don't want to watch you, that you'd be bad for the league and even worse for television ratings. Your presence in the Finals would be a huge disappointment. It would deprive us of what we want to see. It would somehow offend us. And if you can't draw motivation from that kind of insult, you're probably softer than Pau Gasol.

Every aspect of the conference finals -- and I mean both of them -- is viewed as Kobe-LeBron. It's gotten ridiculous, and if Cavs-Lakers doesn't end up happening, ridiculous will become embarrassing.

The Nuggets and Magic are bit players in a larger drama. Their roles are to show up and provide us with material for further LeBron-Kobe comparisons. (And, of course, the required Michael Jordan comparisons to both. Jordan is the meta-comparison, now and forever.) After the Lakers won their Game 3 and the Cavs lost theirs, the headlines were about Kobe and LeBron. Kobe came up big; LeBron didn't.

But when LeBron hit the game-winner in Game 2, it was seen as another check mark on his side of the Kobe-LeBron ledger. He won that round, and it's clear the overstatement -- one Cleveland talk-show guy said it was the greatest moment in Cleveland sports since the Browns won the NFL title in 1964 -- is related to the LeBron people's desire to elevate him above Kobe. It's like they're playing against each other, just in different games and on different courts.

Outside of Orlando, there was very little attention paid to the Magic's ability to take a series lead while keeping their act together in the face of some strange officiating and the game's brutally inconsistent pace.

Before that game, Stan Van Gundy said, "I don't even think most of the nation knows we're in this series. I think this is the Cleveland Cavaliers and LeBron James series and who they're playing against is incidental." Nothing much has changed. There are only two pertinent questions after a Cavs loss: (1) what more could LeBron have done to lead his team to victory? and (2) what more could LeBron's teammates have done to make it easier for him to lead his team to victory?

In Orlando, the blowback has begun. Mike Bianchi, a columnist for the Orlando Sentinel, attacked the LeBron hype in a Monday piece that included the line, "Now, maybe we can turn on 'SportsCenter' without hearing how LeBron James might be the greatest thing to hit the NBA since birth control." Strange reference aside -- when did birth control "hit" the NBA? Was it different from the rest of society? -- Bianchi's tone is indicative of the overselling of the once-inevitable matchup.

As Chauncey Billups said after the Nuggets evened the series at two, "I'm sure the world does want Cleveland and the Lakers, the two best players in the world and the chance to see them in a seven-game series. But I don't want to see it."

He's a pretty mature guy, that Chauncey. But if we somehow get Nuggets-Magic, don't expect the same from everyone. There's only one problem with that matchup: Which team gets to play the disrespect card?