The dumbest idea in sports history

During baseball's noncompetitive interlude of conviviality and frolic, when players take time out to lie on the grass and marvel at their abilities, it's important to note one fact: The idea of placing postseason meaning on a midseason exhibition game is perhaps the worst and most incomprehensible decision in sports.

Actually, that is incorrect. Not just sports -- sports history.

If you consider that statement hyperbolic, here's a challenge: Come up with a worse decision. It can't be a spur-of-the-moment or temporary decision; it must be a decision that becomes permanent policy, something that has the potential to dictate championships -- and then we'll talk. Honestly, I can't even think of anything that comes close in terms of cheapening the product. 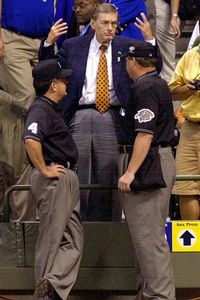 (Next year, the winner of the Pro Bowl will determine which Super Bowl entrant starts the game with a three-point lead! That'll teach 'em to fake injuries!)

Since 2003, as an ill-conceived overreaction to the bumbling tie in the 2002 All-Star Game, Major League Baseball has given the league that wins the game home-field advantage in the World Series. Just typing those words somehow makes it seem less sane than it did just 10 seconds ago.

But if Bud Selig's "This Time It Counts" nonsense is going to continue unchallenged -- and the opposition is pretty hard to hear -- the approach to the game needs to undergo some fundamental changes.

For one, how's this: Instead of allowing the fans to vote for the starters, presumably the most important decisions to be made, let them vote to decide which players finish the game. The way it stands now, barring a big second-inning uprising, the starters don't mean much. They get their four innings and two at bats and then spend the rest of the night laughing and scratching while the reserves decide the game and quite possibly the fate of the World Series.

(Trust me, it gets less and less sane with each subsequent typing.)

And those reserves, it should be added, are often in uniform only because of the every-team-must-be-represented rule -- either that or because they're the product of one of Charlie Manuel's fever dreams. (See: Jayson Werth over Pablo Sandoval; Shane Victorino, a product of the last-second bake-off, starting in center field.)

Under the new rules, the winners of the fan voting would be legally mandated to enter the game in the top of the fifth and play the rest of the game. If this is going to truly mean something -- the players are essentially on vacation, Bud -- you can't have the least deserving players on the field at the most important time.

Which brings up another rule: Ditch the idea of every team having a representative. Some teams don't deserve it. The Oakland A's, to pick one team, have nobody even remotely close to deserving a spot on an All-Star team. Andrew Bailey has great stuff and might earn many All-Star spots, but this had to come down to a coin flip between him and Kurt Suzuki. Even Little League doesn't mandate every team be represented, so why does the league with the best players in the world?

In the words of always-entertaining San Francisco Chronicle columnist Bruce Jenkins, "...if the National League gets the home-field advantage in this year's World Series, it just might be because Brad Hawpe's pop fly off Andrew Bailey caused some confusion between Aaron Hill and Jason Bartlett, the ball fell in safely, and by the time Ben Zobrist raced to the scene, Freddy Sanchez had scored all the way from first."

When you think about it, there really wasn't anything wrong with the every-other-year concept for deciding home-field advantage. MLB determined it needed to impose some order on the World Series location -- rewarding the team with the best record would be too difficult to coordinate flights and hotels, it says -- and it worked fine. At the very least, it couldn't be derided in terms of sheer idiocy.

There really wasn't anything wrong with the All-Star Game, either. The only problem was that certain people -- people who don't actually play the game -- decided it needed to mean something.