Time to black out the NFL's blackout?

The NFL's blackout rule has always struck me as one of the more self-defeating ideas in the marketplace. By withholding local television coverage in markets that don't sell out games, the NFL employs a passive form of blackmail: Go to the game, or miss it altogether.

This isn't an issue in most markets, but those of us in the Bay Area are intimately familiar with the blackout rule. It's just another of the many gifts provided by the Oakland Raiders. And while you might consider those in the NFL who devised the rule to be angels of mercy -- pay to watch the Raiders in person, or stay home and watch Colts-Patriots? -- just spend a moment considering it from a business standpoint. 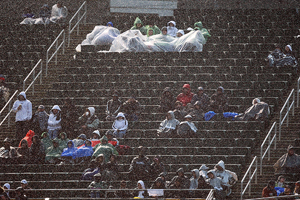 Jed Jacobsohn/Getty ImagesAs always, there are plenty seats and plenty of blackouts in Oakland.

It's a big world out there, and not everybody roots for their local team. It isn't 1976 anymore. You can pay a few hundred bucks and watch every game, every week, which means even if you live in Hayward, Calif., your kid might grow up to be an Eagles fan. Or a fan of every guy on his fantasy-league team (buy your insurance today!), in which case he's as distracted and split-screened and attention-span deficient as the kids at the skate park.

If the DirecTV package isn't in the family budget, the kid can sit in front of the computer and follow his Eagles while he's watching the Seahawks and Broncos on the local CBS affiliate. He can get text-message alerts on his phone every time one of his fantasy-leaguers fulfills his fantasy. Meanwhile, down the road, the Raiders are losing to the Redskins in near-total anonymity.

So the local team doesn't mean as much, or carry the same amount of power as it did when John Madden and Tom Flores wrote the playbook. It might be easier to get their officially licensed coasters and barbecue utensils at the mall, but that's about it. And if you're the local team, trying to market your guys to the kid in Hayward with the green-and-white Vick jersey and the fantasy-league fetish, you want to get your guys in front of them as often as possible, no matter how many people are in the stadium.

And no matter who your guys are, and what their record is, you want to showcase them as often as possible. Accessibility is key, and television provides the accessibility. It's a 3½-hour commercial every Sunday. But if the Hayward kid isn't going to the game, the only distance he's worried about on a Sunday afternoon is the distance from the couch to the screen. That distance is the same everywhere, no matter how fiercely your dad might believe the autumn wind is, indeed, a Raider.

Restricting access to the product seems antithetical to practical economics, but there's never been anything practical about the loyalty of NFL fans. But in the current financial climate -- California's unemployment rate: 11.9 percent -- is it still valid? Can the NFL expect fans in Detroit and Oakland and St. Louis to continue to support terrible teams run by terrible organizations if they punish them for refusing to pay inflated prices to see an inferior product?

The NFL says yes. Dan Masonson, a spokesman for the league, told me as much yesterday. "The blackout policy is not changing, and we haven't had any discussions about changing it," Masonson said. "It's been a successful policy long-term."

Would you believe the blackout rule was implemented only eight times last year? Hard to believe, but only eight games -- four Lions, three Raiders, one Rams -- were blacked out in the 90-mile local area.

We can argue cause and effect all day long. Does the fact that a game is not on television spur fans to attend the game? In Oakland, at least, it seems the sellouts are dictated by the opponent. The Broncos and Chargers sell out; the Bengals probably don't. The NFL, however, is convinced the policy is the thing. It might be simply coincidental, but they have statistics: 4 percent of games were blacked out in 2008, 14 percent in 2000, 39 percent in 1990.

"The purpose of the policy is to sell tickets, but it also makes televised games more attractive," Masonson says. "A sellout is more attractive to the networks and viewers as well."

I asked Masonson about an idea I borrowed from San Francisco Chronicle sports columnist Bruce Jenkins, who suggested the NFL suspend the blackout rule for a year in a nod to the economic climate. Not as many fans -- or corporations -- are as flush as they had been, so why not make a good-faith gesture to those longtime customers? It might also sway the kid in Hayward.

"We haven't discussed that," Masonson said. "We've worked with teams to address the current economic situation by creating some variable pricing plans. We're working with them on flexibility and options. Some teams are allowing fans to pay for season tickets on installment plans."

That's the idea: Add to your debt by paying for tickets over time. The NFL has numbers on its side right now -- 96 percent sellouts! -- so it's hard to blame them for sticking to an outdated policy. Masonson is very straightforward and friendly about the whole deal. To put it simply: It's not a problem, so why change it? The time might come, though, when they'll wish that kid in Hayward grew up with a stronger tie to the local team. If it frays, it'll fray from the inside out.

If I were the owner of a team that lost local TV access to the blackout rule, I would think it serves no purpose other than distracting my fans and making them fans of someone else. But then again, maybe it's all the same to everybody involved. To the NFL, a fan of the Eagles is a fan of the league, regardless of location. To the local team, revenue sharing means a cut of every jersey sale and ticket purchase anywhere in the league. So maybe the argument against the blackout rule is as outdated as the rule itself.