The hard-luck life of a Browns fan

By Geoff LaTulippe | Special to Page 2

Yeah, OK, the hooks were in place way before that -- I was born in Berea, a Cleveland suburb, and even though I lived there for only a year, I'm too loyal for my own good. The Browns were my team by birthright, not unlike jaundice or fetal alcohol syndrome. 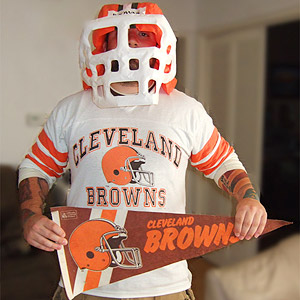 Courtesy of Geoff LaTulippeGeoff will never give up his beloved Browns.

But on that fateful winter day -- I now was living, by some cosmic joke, in Denver -- the 9-year-old me was packed with my father into the decidedly unfriendly confines of Mile High Stadium for the AFC Championship Game. Broncos versus Browns. John Elway versus Bernie Kosar. Dad versus hypothermia. Destiny.

Of course, you remember that game by two nauseating words: "The Fumble." (Seriously, I could barely type that.) I remember it as the day all my hopes and dreams collapsed, died, caught on fire and then were urinated on by the universe.

I remember it as the day my lot in life as a Cleveland Browns fan was cemented. It didn't dawn on me at the time as I bawled my eyes out, with the Denver fans throwing paper balls and ice at me, that my hyperemotional response was a contract. They had me. They were the Ike to my Tina. For life. A life of professional sports disappointment, pain, and Sundays full of deep-seated anger and regret.

Nearly 22 years later, I watched Sunday as we lost for the 12th -- 12th, so help me God -- consecutive time to the Pittsburgh Steelers. In between The Fum … the aforementioned AFC Championship Game and now, we've had a mere five winning seasons, a laughable four playoff appearances and three expletive-ridden years of inactivity after Satan himself ripped our beloved Browns out of Cleveland in 1996.

(Side note on Art Modell: I have so much seething hatred for you that it defies any rational explanation, so I'll just say this: Wherever you are right now, I hope you are sad, alone and in severe physical pain.)

So … what am I still doing here? Honestly?

Well … honestly, I can think of 10 reasons I haven't given up on the Browns:

10. When we DO win -- and oh, one day we will -- it is going to be the most magical, terribly profound thing that ever was. At this point, I'm willing to bet that it will be more important and satisfying than my wife and kid, neither of which exist at the moment.

Look at Red Sox Nation -- 2004 happens, and everything is whisked away in an instant without a care. What curse? Babe Ruth what? Bill Buckner who? 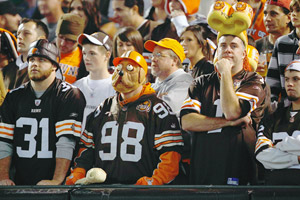 Scott Boehm/Getty ImagesYou've got to respect the dedication of the Dawg Pound.

Can you imagine the most painful memories of your failure-riddled brain laid fallow in the passing of one moment? Red Right 88, The Drive, The Fum … the aforementioned AFC Championship Game, the Modell Move … all of them gone? Forever? One Super Bowl win. That's all it takes.

Of course, you sort of have to ignore that, as an organization, the Browns are light years away from that moment in the talent department, the owner is apparently allergic to good coaching moves, they try to kill all their best players with staph infections and … screw it, I've just decided to go curl up in the fetal position and cry myself to sleep.

But then again, if the Arizona Cardinals can get to a Super Bowl …

9. I love being from an underdog, disrespected city like Cleveland -- especially compared to the other AFC North locales. Consider what we're up against:

Pittsburgh: America's crotch. Literally one of the worst cities on the planet. Full of toothless mountain people. Looks from above as if someone decided, "You know what I'm going to do? Cut out a huge chunk of one of the worst sections of Eastern Europe and drop it in the middle of Pennsylvanian Appalachia." At the end of the day, the Cleveland Browns suck, but at least we're not from Pittsburgh.

Baltimore: A city of hypocrites and degenerates. Cried (rightfully) for nearly a decade and a half, not just about losing the Colts, but about how they lost them … and then accepted another team stolen under eerily similar pretenses and jackassedly supported it with nary a peep. Hang your head in shame, Baltimore.

Cincinnati: It's Cincinnati. I don't have the heart to say more than that. I can't even hate the place. It's … Cincinnati.

Up against those three, Cleveland is like a bright, shining Metropolis of the Future. All we ever did was set our river on fire. Remember, we had Jim Brown. And then there's the whole existence of Skyline Chili. I'm telling you, Cleveland … things could be worse.

8. We've got Josh Cribbs, the most electrifying player in the AFC. Even though no one we've hired as coach is smart enough to figure out how to use him consistently on offense. And he'll probably be gone in two years after forcing a trade that he'll want only because owner Randy Lerner refuses to renegotiate the contract extension he signed a couple of years ago that he's outplayed by, oh, infinity.

But no, it's a great idea to ignore the best Sweet-Jesus-there's-no-way-to-stop-him player we've had since Eric Metcalf.

I'm going to have an aneurysm. 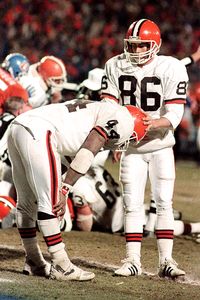 AP photo/Mark DuncanEarnest Byner had to be consoled after that crushing fumble.

7. For Bernie Kosar. For Eric Metcalf. For Clay Matthews, and Hanford Dixon, and Frank Minnifield, and Brian Brennan, and Webster Slaughter, and Reggie Langhorne, and Steve Everitt, and Eric Turner, and Kevin Mack, and Leroy Hoard, and Michael Dean Perry, and for all those guys in the mid-80s/early-90s who played their hearts out for us every fall weekend and, for reasons we can't comprehend, just barely came up agonizingly short.

But especially for Earnest Byner. EB, you're not the reason we lost that game, and you were a cornerstone on one hell of a team. You deserve a hug, a clean record and way more respect. I'd say you deserve forgiveness, but there's nothing to forgive. On behalf of the city of Cleveland, thanks for laying it all out there for us. No way one mistake can erase that.

If you're a real fan, gut-wrenching defeat is not something you discard a team for -- it's something that fuels your lunatic devotion. Give up on everything these fellas fought so hard for? No chance.

6. No more Braylon Edwards. Ever.

5. Because one day I'll be able to say, "No more Derek Anderson. Ever." Incidentally, this day cannot possibly come soon enough. It also should not be confused with the organization's stance on Brady Quinn: "No more Brady Quinn. Ever. Because a subpar performance by a third-year QB who's little more than a rookie in terms of experience -- with tenuous coaching staff support after a protracted, unnecessary and unrealistic preseason position competition -- against two currently undefeated juggernauts and three of the top defenses in the league is enough to convince us that there's absolutely no way the kid can play, and we are smart, smart peop … ooooooh look, a squirrel!"

4. I have no sense of pride, logic or reality. Also, I hate myself.

3. Any win, no matter how putrid or improbable (see: this season at Buffalo) is cause for manic celebration.

Remember when we kicked the crap out of the Steelers in 2003? Or when we crushed the Ravens in 2004? Or when we somehow managed to string three wins in a row together in 2007? Remember???

Me neither. Because like every other Browns fan, all of these events led to my brain melting, serious confusion, me stumbling out of my place of residence in a fog and eventually ending up in a bar plastered out of my mind on glee and light beer. 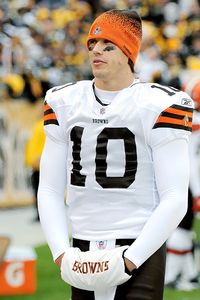 George Gojkovich/Getty ImagesBrady Quinn was given a quick hook by Eric Mangini.

Coincidentally, this is pretty much the same thing that happens after a loss if you're a Browns fan, except you drunk-dial ex-girlfriends just to breathe heavily and hang up, curse Phil Savage at the top of your lungs to no one in particular, vomit in front of a police officer and black out in what you think is an angel cloud but is actually a bush full of thorns and hornets.

Or maybe that's just me.

2. All joking aside, I love the Browns. They cause me near-constant frustration and heartache, but that's the price you pay when you become attached to a pro sports team to which you have only an imaginary philosophical connection. I won't bail and support another team just because mine sucks, only to come back once we experience a modicum of success. What do I look like, a Patriots fan?

1. That afternoon in 1988, while I cried like an idiot, my dad put his arm around me, had a chuckle and told me it would all be OK. We'd win one day. Since my dad is the Greatest Guy Who Ever Lived, I know that's true. He wanted me to keep the faith. So I will.

I mean, why else would he have given up his Sunday to head out into the bitter cold to watch a game he couldn't have cared less about?

Geoff LaTulippe is a Libertarian, Phil Collins lover, Libra and writer of the upcoming Drew Barrymore film "Going the Distance."